The Spirit of Saturday Morning Cartoons In New RPG Game 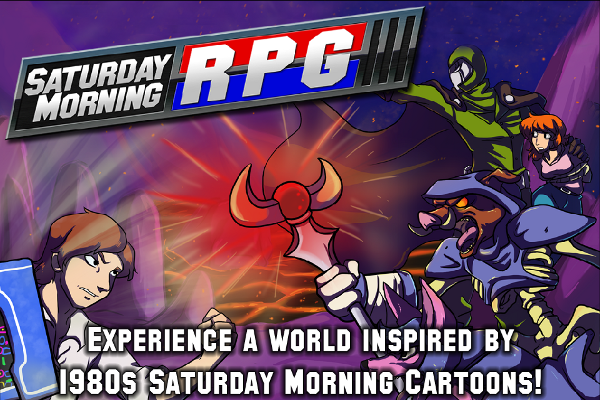 What if there was a video game that featured elements from many of our favorite Saturday morning cartoons like G.I. Joe, Ducktales, Transformers, He-Man, Care Bears, and Alvin & the Chipmunks? Now, combine those elements with Trapper Keepers, Back To The Future, scratch-n'-sniff stickers, The Wizard, joysticks, and keytars...and you'll have Mighty Rabbit Studios role playing game Saturday Morning RPG!! A true mecca of 80s pop culture, SMRPG gives gamers a new environment to relive their childhood and remember a time when Saturday mornings meant everything. 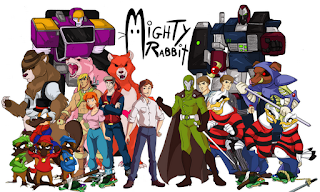 It was luck really that I discovered the game. I was surfing through a web search when the G.I. Joe-esque logo caught my eye. I'm not too much of a gamer nowadays, so I heard nothing about the release back on April 5, 2012. I guess I can attribute some of the blame to the fact I haven't joined the iWorld yet and is only available to Apple gadgets (for now.) So, I turned to a recent acquaintance and fellow League blogger ShezCrafti. I asked the self-proclaimed "gamer, geek, and girl who doesn't get out much" if she had heard about the game. She said she did, but had forgotten to check it out when it was released. I figured she'd be the perfect one to give an accurate review of the game, since she had posted about getting an iPad recently and I knew her to be a die-hard TMNT fan. And review it she did, to the tune of 9/10 stars and stating "Sat­ur­day Morn­ing RPG is a must for any gamer who grew up in the 80s."

Here is Mighty Rabbit Studio's official description of the game:

Saturday Morning RPG (SMRPG) follows the story of Martin “Marty” Hall, an average high school student who has been gifted a powerful ability to channel magic through everyday objects. With his newfound powers Marty has inadvertently attracted the ire of the world’s most heinous villain – the evil Commander Hood. This leads Marty into a series of dangerous plans that he must unravel to save the world (several times!).
SMRPG is a Japanese style RPG that allows players to build Marty’s power up throughout multiple stand alone episodes. Players can carry over stats, inventory, and even story decisions between these episodes (sometimes your actions in one episode will ripple into previous or future episodes!). Saturday Morning RPG is a truly unique and engrossing role-playing game experience that can not be missed!

Now, check out this screen shot slideshow of episode one that I put together...

Okay, so if my slideshow and Shezcrafti's review still doesn't convince you...try this on for size. Two legendary soundtrack composers, Vince DiCola (Rocky IV, Staying Alive, Transformers: The Movie) and Kenny Meriedeth (Duck Tales, X-Men, Power Rangers) wrote the musical score for Saturday Morning RPG. Knowing the pedigree of these two composers, you know SMRPG's soundtrack is killer. (I'm really upset now that I can't play this game! I really feel like iBlewit!) So not being able to check out this 80s awesomeness live yet, I did the next best thing...I recently contacted Josh Fairhurst, the lead designer and programmer at Mighty Rabbits Studios, to ask him a few questions about the game...

Jason: I’ve seen some great reviews of the game, how has it been received overall by gamers?

Josh: For the most part, people really love the game and what we’ve done with all the pop culture references. I’ve gotten emails from people around the world thanking me for making the game – it’s incredibly rewarding to get a response like that!

Jason: As the lead designer/programmer, what is your favorite of part of the game or what are you most proud of so far?

Josh: I’m most proud of how we’ve managed to get so many references and parodies to coexist seamlessly in the game world. Throughout episode one and two, we probably reference close to 100 different things. Those references never seem to stick out - their existence usually makes sense in the world or within the context of the game’s story. That kind of happened organically during development, and I’m really proud of how the game world ended up.

Jason: Do you have plans to publish the game on other platforms?

Josh: Totally – we’ve got an Android version of the game that is running nicely and we’ve got a PC port on the horizon for a winter launch.

Jason: You made known this month that episode #3 is in the works. Do you have a target date for the launch?

Josh: At first we thought we’d be able to have it out by June, then we said we could totally hit July, now it’s August and we’re still not done with it. I’ll go ahead and say our target launch date for Episode 3 is the second week of September, but I usually jinx myself when I announce release dates. I’m going to try my hardest to meet this one, though!

Josh was also kind enough to pass along an exclusive screenshot from episode 3! 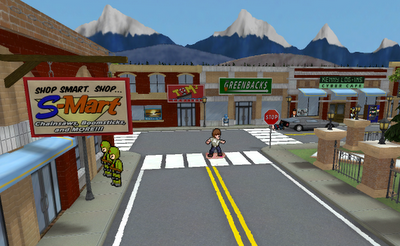 Oh yeah, did I mention you can download episode one for free??? WHAT??? That's right! Now, if you are still reading this and haven't rushed off to download the game, I need to tell you that as awesome as episode one is, there is substantially more in episode 2. Plus with episode 3 almost here, you might want to choose the deluxe version of SMRPG. For $5.99, you get the first two episodes and all additional episodes released are free! I now release you to download the game from iTunes and enjoy ONE ONE CONDITION....come back and leave a comment with your review of the game!
Newer
Older