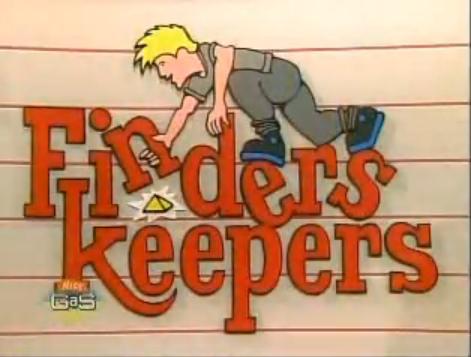 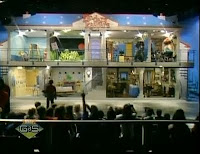 One of my favorite game shows on Nickelodeon was Finder Keepers. It incorporated a simple concept of finding hidden objects in one of many rooms in a two-story house. Who hasn't lost something important and spent hours or sometimes days looking for it? Finders Keepers made it fun and took the most pain-staking element out of that process after you found your lost toy or your parents' keys...the clean-up!! And not only could you trash the rooms, you could win prizes at the same time!!

Nickelodeon knew what they were doing when they setup the rules to Finders Keepers. They didn't start the show in the house, but let the suspense build before any rooms were trashed. First, the two teams won money and the right to search a room by finding objects in a hidden picture. I was a big fan of Highlights magazine as a kid and my favorite part was always the hidden picture puzzles. After initial round of circling hidden objects, both teams got to enter the house and begin the finding adventure.

Clues were very important when searching, because there was a different object to find in each room...and there were some crazy themes in each of those rooms including Frankenstein's laboratory, Ali Baba's bathroom, and the "moon room." Another twist to the game (as if trying to find something with hundreds of kids screaming in the live studio audience wasn't enough) was if you didn't find the object after 30 seconds, the prize money for that room went to the other team! The circling and the finding went on for one more round, increasing the cash earned for each object found. Finally, whoever had the most cash earned the right to go on a room-to-room finale of searching the house!

Six rooms, six clues, and six objects to find in 90 seconds. And apparently because this was such an daunting task, the contestants strapped on helmets, elbow pads and shin pads. This time for every object found, the team won a prize. Find all six objects and you won the grand prize! The show was that simple and provided a format that kids loved to watch. From 1987-1989 there were 195 episodes produced on Nickelodeon and also in first run syndication. The game changed a little in the syndicated episodes, using colorform objects to stick to a large picture board instead of a telestrator for the hidden picture rounds. The host and announcer also changed in the syndicated episodes but Nickelodeon continued to air the show as well as other TV stations across the country.

Filming of the show was in Philadelphia, PA, the same studios where Nickelodeon's most popular game show Double Dare was also filmed. Finders Keepers also continued to air long after the original production, featuring episodes during its GAS programming (Games and Sports For Kids) from 1999-2006. The UK also produced its own version of the show for 6 seasons from 1991-96 and a brief revival in 2006. The US version was marketed well with Converse sponsoring each show with the contestants and host both wearing their sneakers. Nickelodeon also produced a board game, as they did with other popular shows. Other similar game shows like Fun House would piggyback off the popularity of Finders Keepers in the early '90s, but the original was always my favorite and a reason why I loved Nickelodeon!!