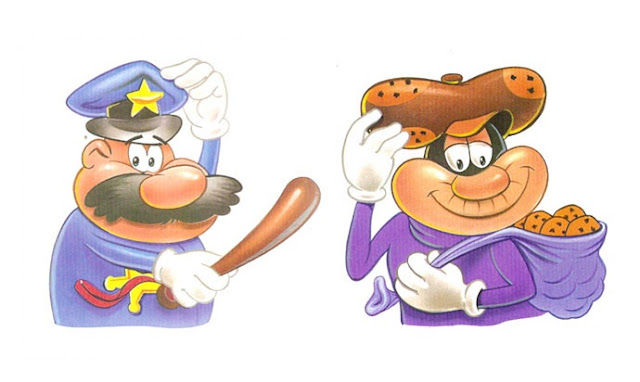 Ah, the days of Saturday morning cartoons and sugary cereals. There were many breakfast commercials that tempted us and made us to beg our mom when venturing down the cereal aisle at the grocery store. One of my favorites was Cookie Crisp...of course, in part due to the advertising. They made it seem almost like I had to get a box before the Cookie Crook stole it all!!! 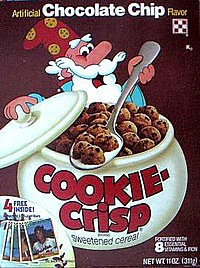 The cookie capers that took place in the '80s weren't the first choice of advertising for Cookie Crisp. Ralston Purina (yes, the same company that makes pet food) developed the cereal beginning in 1977. Their efforts to sell the chocolate chip cookie and milk taste to the public began with Jarvis the magical wizard. From the late 70s until 1981, Jarvis would wave his magic cookie-shaped wand and turn cereal bowls into cookie jars. Dessert for breakfast...Genius.

In the early '80s, during Jarvis' run as the Cookie Crisp mascot, another character showed up in a black mask, purple shirt, and a red hat known as the Cookie Crook. The criminal mastermind debuted in a TV commercial trying to steal the cereal. Soon after, Jarvis was a thing of the past and Cookie Crook stole the show.

Nothing against Jarvis, but if it was good enough for McDonald's to have a burglar stealing your product, it was good enough for Cookie Crisp. But the Cookie Crook needed a proper rival that could thwart his evil plans to steal our cereal before we could get to the grocery store. Enter Officer Crumb or better known as just the Cookie Cop. At first, he was a bumbling lawman with an Irish accent that could never quite catch up to the Cookie Crook. The advertisers decided enough was enough. Officer Crumb began acting less like a Keystone Cop and more like Malone from The Untouchables and finally catching the cookie criminal. Cookie Crook's dog Chip also became part of the criminal activity up through 1997.

Cookie Crook and Officer Crumb were retired in 1997. Chip became the new full time mascot up until 2005, when he was converted to the current Chip the Wolf mascot. Cookie Crisp still remains in the cereal aisle and has stood the test of time. It has proved that a good cereal idea with a good marketing campaign to children of the '80s was all it needed. I don't care what Jerry Seinfeld says...