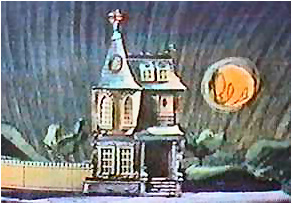 Before Nick Jr. hit the airwaves (heck, even before Nickelodeon itself!) there was Pinwheel. With the rapid success of Sesame Street on public television throughout the 60s and 70s, cable television brought a new venue by which children's programming could be watched. The Pinwheel channel was created in 1977, offering similar educational material as Sesame Street, but over longer programming blocks. Sixty minute episodes aired consecutively up to 5 hours at a time, offering short-form shows and animated films in between episodes. 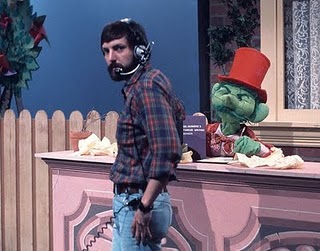 The Pinwheel channel became Nickelodeon in 1979, but continued to air Pinwheel through 1989. With 260 episodes produced, it remains the most produced show in Nickelodeon history. All epsiodes revolved around a Victorian style house with a pinwheel attached to its tallest peak. The main human characters were Sal and Smitty who owned the local newspaper called the Daily Noodle and who were usually hunting for the elusive admiral bird. Other characters included Jake and his sound effect boxes, Coco the mime and Franci the artist. The puppet characters were also an integral part of the show, most using strings and puppeteers from above which now would look very primitive. They included Plus and Minus who were in a never-ending game of tag called "Gotchya Last," Silas the slow moving snail, the grouchy Ebeneezer T. Squint who strove to be on the front page of the Daily Noodle and the sibling hobo bugs Herbert and Lulu.

Pinwheel was also know for its short animated and stop motion films in between episodes, many of which were produced from around the world. A few that I remember most are Chapi Chapo, Bunny in a Suitcase, Hattytown Tales, and Simon in the Land of Chalk Drawings which was also featured on Captain Kangaroo and Romper Room. After Captain Kangaroo was cancelled in 1984, Bill Cosby's interactive Picture Pages segment began airing during Pinwheel. Cosby and his musical "Mortimer Ichabod Marker" guided viewers through a puzzle that corresponded to a page in the Picture Pages activity book.


Pinwheel remains as the 6th longest running show on Nickelodeon (in years) behind All That, You Can't Do That on Television, Nick News, Rugrats, and SpongeBob SquarePants respectively. Unfortunately, Pinwheel has never been officially released to DVD, but on occasion you can find episodes on VHS from the late '80s on auction sites like eBay. You can also find some clips on YouTube (where many of the links in the post will take you.) It's kind of a shame that Sesame Street overshadows Pinwheel and the great educational content we remember from growing up in the '80s. But we cherish it as a part of cable television history and one of the foundational reasons why we loved Nickelodeon!!

Check out more RD80s entries in the Reasons We Loved Nickelodeon series.
Newer
Older
Powered by