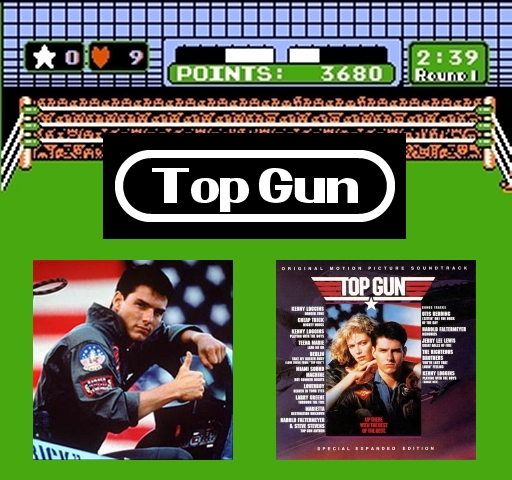 Can you imagine watching the Breakfast Club without hearing "Don't You Forget About Me?" Do you think of John Cusack holding a boombox over his head every time you hear "In Your Eyes" on the radio? Movies and music go hand-in-hand, but if you had to choose just one...which would it be? Movie vs. Soundtrack Punch-out! will determine once and for all if the movie or the soundtrack is better! Each bout includes a brief overview, a look at the commercial success of each and then, the legacy. And since I'm not the only voice in the 80s universe, a poll will be posted for everyone to cast their vote! Top Gun is a 1986 film directed by the late Tony Scott. The story was inspired by a magazine article written by Ehud Yonay for California. The movie follows Naval aviators Lt. Pete "Maverick" Mitchell (Tom Cruise) and his Radio Intercept Officer Nick "Goose" Bradshaw (Anthony Edwards) aboard the USS Enterprise aircraft carrier. The duo got a shot to train at the Fighter Weapons School known as "Top Gun" to showcase their skills. Mitchell is seen as a "loose cannon" to his instructors, showing excellent skill but also flying recklessly at times. "Maverick" also puts the moves on Charlotte "Charlie" Blackwood (Kelly McGillis) at a local bar, who he later finds at is also an instructor at the school. Juggling with how to proceed with "Charlie" and trying to perform under intense competition from Lt. Tom "Iceman" Kasansky (Val Kilmer,) "Maverick" tragically looses his buddy "Goose" during a training accident. Maverick is cleared of any charges over the death of his RIO, but still feels responsible and struggles to get a clear picture on his future in the Navy. Consoled by "Charlie" and getting advice from his chief instructor Commander Mike "Viper" Metcalf (Tom Skerritt,) "Maverick" completes the Top Gun program. At the graduation party, the pilots are instructed to immediately return to the USS Enterprise for a "crisis situation." As they embark on a real-life mission this time, questions still surround "Maverick" if he can perform once more under the pressure.
The movie soundtrack featured a great line-up of music artists. The "king of 80s soundtracks" (as I call him) Kenny Loggins contributed two tracks including the iconic thrill ride "Danger Zone." Tony Scott also directed the music video featuring footage from the film. The love theme "Take My Breathe Away" by Berlin used synthesizers and vocals from lead singer Terri Nunn to express the relationship of "Charlie" and "Maverick." Other artists contributing to the soundtrack included Loverboy, Cheap Trick, Teena Marie, and the Miami Sound Machine. Beverly Hills Cop composer Harold Faltermeyer teamed with guitarist Steve Stevens to produce the "Top Gun Anthem" which was featured in the opening credits of the film.

Top Gun had tremendous success at the box office in 1986, becoming the highest grossing film of the year with a total of over $176 million in the US alone. Sales of bomber jackets and Ray-Ban Aviator sunglasses vaulted through the roof because the film, along with a major boost in US Navy recruitment. The film was nominated for several awards mainly for sound, editing, and music. It did receive the People's Choice Award for Favorite Motion Picture. The big award winner was the soundtrack, taking home an Academy Award and Golden Globe for Berlin's "Take My Breath Away" and Grammy for the "Top Gun Anthem." The soundtrack was a mainstay on the charts, topping for 5 weeks and producing two high-charting singles. Berlin's Take My Breath Away" reached the #1 position in 6 different countries including the US and UK. Other songs released in the US as singles were Kenny Loggins' "Danger Zone" which reached the #2 position, Loverboy's "Heaven In Your Eyes" which reached the #12 position, and Kenny Loggins' other track "Playing With the Boys" which only made it to #60. The album is also the 8th best-selling soundtrack of all time with over 9 million units sold in the US.
Top Gun's legacy has been a lasting one over the past 26 years, although it was never critically acclaimed. It maintains a 50% critic rating on RottenTomatoes.Com with an 82% audience rating. Using the success of the film, the popular 1991 parody film Hot Shots spoofed many facets of the original and actually out-grossed it at the box office. A special edition of the soundtrack was released in 1999 featuring five more tracks, such as "You've Lost That Lovin' Feeling" by the Righteous Brothers, that were not on the original soundtrack but feature in the film. A deluxe edition was also released in 2006 featuring five more 80s hits from artists like Mr. Mister, Starship, and Europe. The movie has also been harolded in recent years on "best of" lists including #19 on Yahoo! Movies Greatest Action Films of All Time and AFI ranked the line "I feel the need...the need for speed!" as #94 on their 100 Years…100 Movie Quotes list.

So coming into this post, I was expecting a double vote for myself. I really love the movie and think the soundtrack is one of the best in the 80s. But even though the edge lies primarily with the soundtrack (the awards, chart positions, and sales figures) my vote is for the movie. I know many people think the movie is cheesy and stuck in the 80s, but I still think its very watchable and a classic. The soundtrack is great, there is no doubt about it...the movie has just made more of an impact on me than the popular songs.

Agree? Disagree? Let me know your vote in the comments! If you simply can't decide...you can always vote for both!