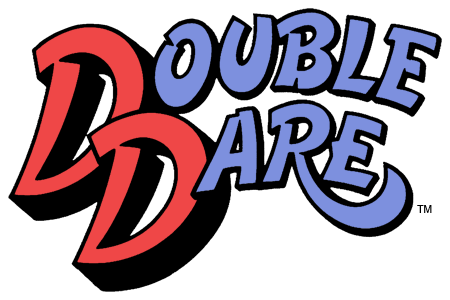 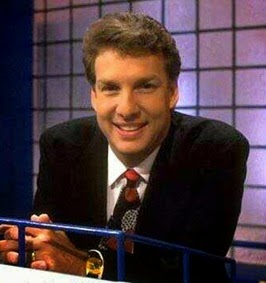 In 1986, Nickelodeon found the perfect recipe for ratings by combining kids, slime, trivia, and physical challenges into a game show called Double Dare. The viewer response was tremendous and resulted in Nickelodeon's overall ratings tripling over the course of its first few weeks on the air. The weekday only show quickly transformed into a daily show adding Super Sloppy Double Dare on the weekends. With 170 episodes being produced its first year, the popularity of the show caught on with FOX executives ordering 130 episodes for local affiliates to air in first-run syndication (the first cable game show to achieve such a feat.) New episodes continued production through 1993 with Nickelodeon airing reruns during its "GaS" programming through 1999. In all, 525 episodes of Double Dare were produced in its initial run.

Double Dare began with both teams trying to complete a physical challenge and gain control of the game. Once the challenge was complete and teams were introduced, round one began. The team in control would be asked a question for $10. "If they didn't know the answer or thought the other team didn't have a clue," they could dare the opposing team for double the amount ($20.) A "double dare" could then be played back, forcing the team with control to answer the question for four times the original amount ($40) or accept a physical challenge. If the physical challenge was not completed or an incorrect answer was given at any time, the appropriate money total and control of the game would go to the other team. 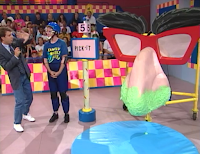 Round 2 of the game was pretty much the same as the first round. A toss-up challenge began the round with money amounts doubled throughout the question round. Whichever team had the most money at the end of the 2nd round went on to conquer the final round, the obstacle course. Eight obstacles stood between the winning team and the ultimate grand prize for kids in the 80s...a trip to Space Camp in Huntsville, AL. If the team could grab every flag at the end of the obstacles within 60s seconds, the team could declare themselves as Double Dare champions!

Many versions of Double Dare would air over the years including Family Double Dare, Celebrity Double Dare, and the messiest of them all Super Sloppy Double Dare. At the turn of the century, Double Dare 2000 was released on Nickelodeon with a new host, new set, and larger physical challenges. But despite the grand scale, the revamped show never made it passed its first year. In April 2012, the Orlando hotel Nickelodeon Suites Resort began offering a "Double Dare Live" show for its guests to compete against each other. There has been plenty of Double Dare merchandise released over the years including a home game, LCD handheld electronic games, computer and NES video games, a lunchbox and home videos. The show's legacy extends beyond just merchandise though, with TV Guide ranking the game show #29 in its list of "The 50 Greatest Game Shows of All Time." Loved by kids and families everywhere, Double Dare was one of the biggest reasons we loved Nickelodeon!

As a parting shot, check out this reunion in 2016 on the Nick Rewind channel featuring Marc Summers, Robin Russo, and John Harvey...