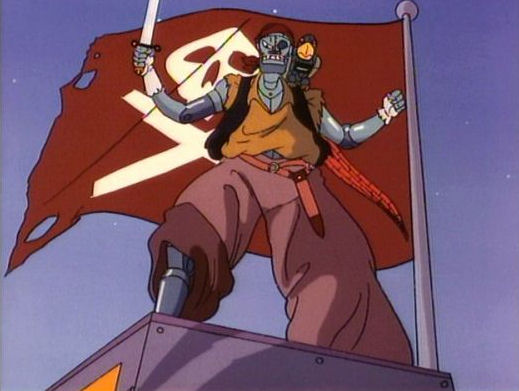 ARGH!! Let's weigh anchor and cast off this ship of villains, me hearties! Let's go back and explore the best pirate villains in 80s (and what the heck, early 90s) animated TV shows.

The Pepper Pirates (The Smurfs)

Buccaneer Marco Smurf finds himself captured at the helm of the Pepper Pirates in episode 210 of The Smurfs. These plundering band of raiders play a nice substitute to the smurfs usual adversary Gargamel, although their motives appear to be the same: #1 Find smurf village #2 Umm...lease the mushrooms out as a real estate investment? If you don't remember the episode (or care not to make the easy prediction,) the smurfs attempt a valiant rescue of Marco after the Pepper Pirates threaten to hold the smurf ransom and engage in some seagull sport shooting. 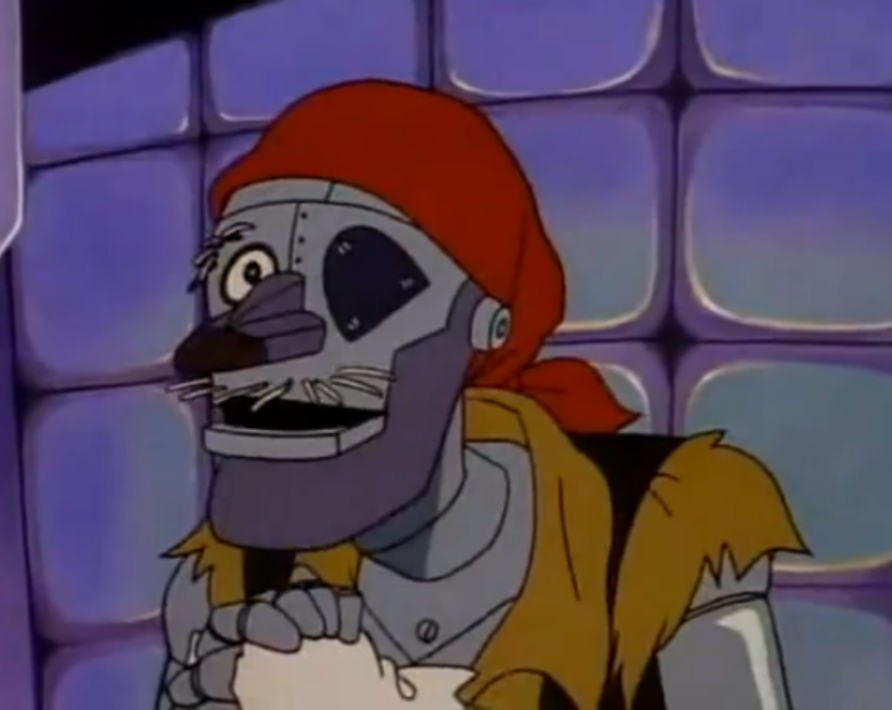 Captain Cracker was a...eeeeee... robotic pirate captain...eeeeee...of the spaceship Jolly Rogers who appeared in...eeeeee...three episodes in the Thundercats animated series. (Okay, enough with the eeeeee's. I'm getting annoyed just writing them! For those of you who don't remember, Captain Cracker makes an "eeeeeee" sound during his dialogue.) Calling himself the "scourge of the spaceways," his first appearance in the "Madora and the Pirates" episode begins by raiding a prison planet and releasing the criminals to their freedom. In future episodes, Captain Cracker escapes from prison himself with the evil plan to turn Third Earth into a pirate's paradise. Although he only appeared in just three episodes, a Captain Cracker action figure was released late in the original toy line.

A new-age pirate, Captain Walker D. Plank proved to be a worthy adversary for James Bond, Jr. despite his name. With the resources of S.C.U.M. (Saboteurs and Criminals United in Mayhem...gotta love those cartoon acronyms,) this marauder of mayhem terrorizes 12 episodes in the animated series. Some of his plots were surprisingly good like flooding New Orleans and then breaking into the U.S. mint to steal printing plates in episode 51 "Old Man River." Captain Walker D. Plank came complete with a pet parrot which oddly wore an eyepatch and had a pegleg of his own. (Must have been a rough growing up in concrete jungles.)

Captain Bizzarly and his crew sail the oceans of Water-O in an attempt to be rid of the heroic Tigersharks. In this short-lived cartoon that aired during The Comic Strip animated series, the buccaneer captain double-crosses his evil ally T-Ray in true pirate form in an attempt to regain his place as ruler over the waters (even though he has a fear of water...I can't make this stuff up.) His pet dragon and seven person crew act out his hatred on the Tigersharks as evident in the "Voyage to Water-O" episode. But the real crime in these waters could be that this sister show of the Thundercats and Silverhawks lasted just 1 season and remains sunken on the bottom of the cartoon ocean.

Captain of the Maelstrom, Bloth seeks to control the Thirteen Treasures of Rule in order to control Dark Water and the entire planet of Mer. He and his villainous crew do battle against Prince Ren, the son of Primus who was held captive by Bloth for seventeen years. (Yeah, this pirate doesn't play.) Pirates of Dark Water would turn out to be the "Waterworld" of cartoons, sinking quickly in the ratings. The show sadly never completed its swashbuckling tale, only collecting 8 of the 13 treasures in its 21 episodes. Boasting a crew of veteran voice actors like Peter Cullen and Frank Welker of Transformers was still not enough to see Bloth's plan of world conquest come to its full fruition of failure as with most cartoon villains. Would've been interesting to see what would have happened to the pirate captain as I don't believe there was yard arm in existence that would've held his manatee of a body.


Before I continue, a quick message from our RD80s sponsors... 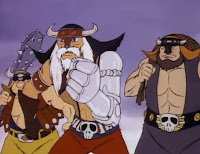 A band of pirates led by Captain Hammerhand, the Berserkers are first seen in the 6th episode of the Thundercats trying to pillage unicorns from a forest on Third Earth. The heroic cats rescue the divine equines and sink the Berserker pirate ship and crew into a murky whirlpool of death. After being resurrected by Mumm-Ra, Hammerhand outfits a new crew (Cruncher, Ram-Bam, and Top Spin) all with unique cybernetic powers like himself to battle the Thundercats in the season 2 mini-series. Again, despite being in just a few episodes as the aforementioned Captain Cracker, the new Berserker crew were each molded into action figures. It's too bad Captain Hammerhead never got to use his metallic robotic arm to beat the living Thundera out of Snarf (actually a simple backhand would've done it for me.)

Leader of the Air Pirates and captain of the Iron Vulture airship, Don Karnage and his pack of seadogs (or wolves) attempt to thwart Baloo and his adventurous friends throughout the 65 episodes of the animated series Talespin. Don Karnage is a skilled pilot but frequently let's his balloon-sized ego get in the way of victory. (Check out this Don Karnage tribute video on Youtube.) More times than not, his crew is to blame for not achieving his ultimate goal: Reach the City of Cape Suzzette and pillage and plunder to his heart's content. You might find the nerve to tell the buccaneer captain to get a new crew...but just don't call him "crazy."

So I thought we'd end our journey in search of the best pirate villains on a high note, instead of a one-way trip to Davy Jones' locker. Sea Hawk is a Han Solo-type pirate featured on She-Ra: Princess of Power who ends up leaving his smuggling ways for...yep you guessed it, the princess. After aiding the evil Horde with supplies in return for money, he meets Princess Adora (aka She-Ra) and decides to join the Rebellion. (HOLY CRAP, they ripped of Star Wars.) Sea Hawk then let's his true intentions be known to Adora (see the end of episode 16 The Return of Sea Hawk.) Basically, he says "the Rebellion is cool and ev'thing, but some princess time on the beach is what this playa needs." (Not sure but I think I might have misquoted that.) Anyway, this scoundrel turns out to be a man's man. He doesn't try to go after the lofty She-ra but instead goes in for the kill with Princess Adora. Oh yeah, they kiss...at least twice during the show's 93 episode run. Cheers to you Sea Hawk for landing the secret doublemint twins of Etheria...you scruffy nerf herder.

So, did I miss any pirate villains? Any you would have left off? Hit the comments section below!
Newer
Older
Powered by