In 1983, scientist and TV host Don Hebert got another chance to teach a new generation of kids about science. For 14 years from 1951-65, Hebert hosted the live kid's TV show Watch Mr. Wizard. The half-hour show featured science experiments performed by the host for a child visitor. The show was a success for NBC's Saturday morning lineup and won the 1953 Peabody Award for excellence in television programming. The show was briefly revived from 1971-72 as Mr. Wizard before landing on the Nickelodeon cable channel in 1983. 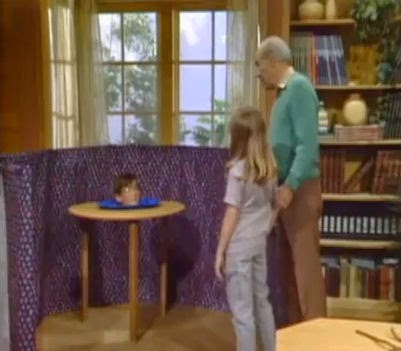 Mr. Wizard's World aired on Nickelodeon for 7 years and produced 78 episodes, many of which were rerun throughout the shows lifetime. What was as an all-American show was now produced in Canada for the cable channel. The revived show used the same format of kids visiting Mr. Wizard's house to conduct scientific experiments. Sometimes more than one kid would visit, as in the episode which showcased the talking head illusion (pictured right.) Another popular segment of the show was called "Ask Mr. Wizard" where kids could write-in and ask him to perform an experiment  The show was an instant success for Nickelodeon, becoming its #3 rated show behind Livewire and You Can't Do That On Television in its first year of broadcast. Even after it was cancelled in 1990, it continued on during Nick at Nite and very early morning programming through 2000. The show can now sometimes be seen on The Science Channel cable network.

I have fond memories of watching Mr. Wizard's World. I remember it being on many times as I was getting ready for school. Sometimes my mom had to pull me away to avoid being late. As with most kids, I was captivated by magical shows like He-Man and Masters of the Universe or the Smurfs. But Mr. Wizard was different. It was real...and showed us how it was done! I can't say anything I watched on the show directly helped me in school but it was definitely an educational show sometimes disguised as wizardry. The one episode that sticks out in my mind featured an apple-eating experiment. (I actually remember trying this one at a friend's house.) I think it was a girl that stopped by that day and did a handstand next to the refrigerator. Mr Wizard then proceeded to feed her pieces of the apple in an attempt to see if she could swallow it while upside down. It was a simple trick that you could pretty much guess the outcome but there was also the chance that she could like throw it up, which would've been funny. This pyro-inspired kid never tried any of the cool experiments with the flash paper that Mr. Wizard used many episodes. And I'm pretty sure the lysol-can-in-the-bonfire experiment I performed at my friend's house up the street wasn't on the show.

Don Herbert passed away in 2007, four weeks before his 90th birthday. He was quoted as saying "My time on this Earth is getting shorter and shorter each day, but no matter how old I get, and even when I am dead, Mr. Wizard's World will never die". So true. Find several playlists on different topics on the official Mr Wizards Studios channel on YouTube. You can also purchase 4-episode DVD sets of the original Watch Mr. Wizard or Mr. Wizard's World on Amazon.