I'm Dreaming Of A White...Leather Jacket 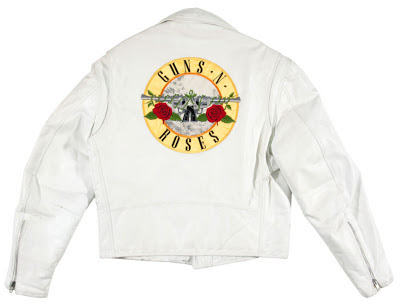 This week's assignment for the League: You have very deep pockets but your shelves are bare. Go on a shopping spree at Hake’s to make your place a little more awesome.

Score! For those of you who don't remember, I went on the Holy Grail of Shopping Sprees last July courtesy the League. It was one of my favorite posts last year and I was very excited when I saw this week's topic and the chance to do it again! Now last time our auction spree was at a Profiles In History auction (featured in the Syfy TV series Hollywood Treasure.) There were so many high profile, high-dollar items that I didn't know where to start! I decided to make it a challenge though and gave myself a $50k budget to keep myself from writing a journal of all the items I wanted. This time Hake's Americana & Collectibles is our source for the spree which doesn't have the bank busting items like PIH but more small collectibles and memorabilia. You could almost say these items are collector's collectibles for someone who wants to add many great small items to a collection instead of one or two universally appealing items.


So, no budget this time. I'm just gonna go after the first five items that made me audibly say "WHOA!" or "NICE!" Hake's Auction #208...here I come! Need to spend some of this fake money that is burning holes in my fake pockets!

I initially decided to scan through the auction highlights page on the Hake's website. I was happily greeted when I scrolled to the bottom of the page with what is probably my favorite item of the whole auction. (This would have been a headlining piece if you ask me.) PARADISE FOUND! Axl Rose's white leather jacket from the Guns 'N Roses "Paradise City" music video is staring me in the face...one of only three in existence. Auction description states: The first jacket made belongs to Axl Rose, the second is on permanent display at the Hard Rock Casino in Las Vegas, NV. and the third jacket (this one) was given in appreciation to the manufacturer of the Guns N' Roses tour merchandise, who kept it until recently. I would tell the manufacturer that decided to part with it that "you're jacket is in good hands." And even though Axl has pretty much renamed the band to Guns 'N Posers, the Appetite of Destruction album meant so much to the history of hard rock/metal music. PRICE TAG: $5000 - $10,000

Now for those of you who don't know me, I'm a HUGE Los Angeles Lakers fan. My favorite NBA player growing up in the 80s was Earvin "Magic" Johnson. So why on earth would this Lakers fan touch a Larry Bird autographed ball?! One word...Respect. If it wasn't for the "Hick From French Lick," we Laker fans wouldn't have had our hated arch rival Boston Celtics and those epic battles in the 80s. Back then I would have never considered owning anything with that stupid leprechaun on it. Now with all the Lakers memorabilia I have stashed away, maybe it's time to balance my collection with some "Larry Legend" memorabilia. This ball would be a first step into my greatest sports rivalry of the 80s collection. PRICE TAG: $100 - $200

I'm not much of a Sci-Fi collector but the 1983 miniseries V (and 1984 TV series) is one I vividly remember watching as a kid. I was at a friend's house with my parents and after we had dinner, I remember playing with my friend while they were watching the show. I'm not sure if it was a planned watch, but we ended up stumbling into the room at one point and seeing the "lizard people." At seven years old...trust me, you'll remember the moment you saw humans removing their skin and becoming reptiles. So in light of that, the V lunchbox would be a fun reminder of that moment in time for me. PRICE TAG: $100 - $200

But wait, there's more! Although a bit creepy and plain looking, why not snag a prototype figure of Diana?! If you'll remember, Diana was essentially the second-in-command of the "visitors" and used her sexy charm and mind-control "conversion" process to manipulate the humans. The part, who was played by Firefly's Morena Baccarin in the 2009-11 V series, was one of the main characters in the original show and (from what I've read) the main character in the reboot. Action figures are fun to collect and having a prototype figure would definitely be one of a kind piece to brag about to your friends and acquaintances that you have yet to confirm are human.  PRICE TAG: $1000 - $2000

If you know me at all, I'm always on the look out for cool 80s stuff to show my two boys. I embarked on a journey with my oldest (now 8) to re-watch the entire Knight Rider series. We finally completed the journey a couple weeks ago thanks to Netflix, but my oldest decided to start it over again! (tear rolls down my cheek.) I also just bought a big boy bike for my youngest, a Transformers Bumblebee bike which we all thought was cool. Even the tire treads are the Autobot symbol! But when I saw this bike, it would definitely be coming home with me. I vaguely remember either one of my friend's having this bike or seeing it in the store. The K.I.T.T. dashboard between the handlebars just seems to be familiar. Now, if they would've made the bowling ball hubcaps for this bike, I bet it would fetch a higher price! PRICE TAG: $100 - $200 TOTAL

So there are the five items I was immediately drawn to in the auction. Not bad for $6300 - $12600. I'm sure all of you could see me peddling down the road on my K.I.T.T. bike with my V lunchbox in hand and wearing my GNR jacket, right? Be sure to check out the auction at Hakes.Com, where you can sign up to receive a free auction catalog in the mail.

Check out these other Hake's auction shopping sprees by The League:
ShezCrafti goes button crazy.
AEIOU & Sometimes Why snags an Alien figure.
Combat Workshop goes for the Sci-Fi model kits.
Nerd Lunch is feeling hungry for Super Friends.
Achievements In Gaming gets Lost in Space.
Blogger From Planet X raids the James Bond dossier.
Fortune & Glory Days goes action figure hunting.
Hench Girl has a thing for cat paintings.
Robot PJs has an encounter with the king of all Dino-Riders.
Branded in The 80s goes diving for prototype sea creatures.

And a happy belated 1st birthday to The League! I've had lots of fun blogging and tweeting with fellow league members over the past year. Here's to many more!
Newer
Older