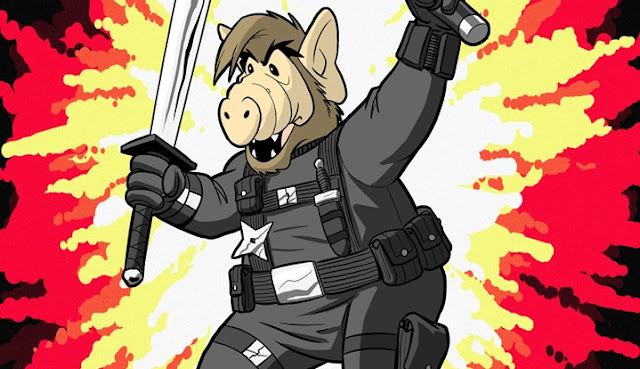 Call me crazy, (YOU'RE CRAZY!) but I like mashups when it comes to '80s fan art. Some I've posted about before include '80s movie characters as Garbage Pail Kids and what '80s movie/TV cars would look like in a Disney Pixar film. Now, I wasn't a huge G.I. Joe collector when I was a kid, but I do remember one of my friends having the William "The Refrigerator" Perry figure who was on the famous 1985 Chicago Bears championship football team. Another notable G.I. Joe team-up character in the '80s was WWF wrestler Sgt. Slaughter who crossed over from the wrestling ring into the G.I. Joe: Real American Hero animated series in 1985.

More recently, the 25th anniversary G.I. Joe figures from 2008 featured a team-up figure know as Specialist Trakker, which some may recognize as Matt Trakker from the M.A.S.K. animated series. ( I had to snag this one for my personal collection for obvious reasons.) Yesterday, I stumbled onto a great article via Moviefone which I simply had to share. Moviefone has teamed up with artist Dennis Culver to display seven "Forgotten Joes of the '80s" which are famous characters as if they joined G.I. Joe or Cobra. Culver uses the traditional figure card background to showcase Alf, Pee-Wee Herman, Care Bears, Sloth & Chunk from The Goonies, Billy Idol, Rainbow Brite & Strawberry Shortcake, and Mr. T as Clubber Lang like never before!