Chase Your Dreams With This Perfect Strangers Game 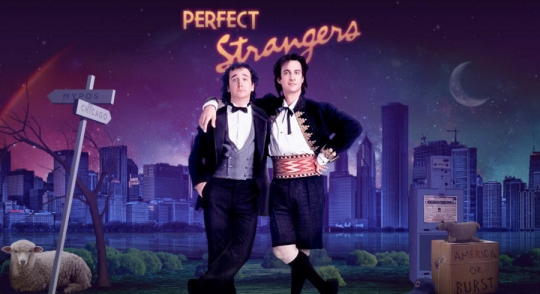 Chase Your Dreams With This Perfect Strangers Game


If there is one thing we learned from the 1986 sitcom Perfect Strangers, it was to chase your dreams. For 8 seasons, we watched Balki Bartokomous' transformation from a Mediterranean shepherd to life in the United States. Now, two decades after the show's finale, Brooklyn-based video game designer Jason Oda has made it possible to chase your own dreams with help from a Perfect Strangers viral video game.

Before you begin the game, you must first tell Balki what you dreams are. And then, the race is on! With the Perfect Strangers theme "Nothing's Gonna Stop Us Now" as your soundtrack, you take control of Balki and run through a world of Chicago streets and Mary Anne heartbeats. Run, jump, and fly while collecting as many stars as you can in order to obtain your dream.

When you've finished your quest, you'll receive a ranking (my first attempt was a Harriette Winslow) and then compare your score on the leader board or share it on your social media. You can also see the last 24 dreamer's scores and what the aspire to be.

Jason Oda's concept was done out of pure love for the show with him quoted as saying in the L.A. Times "It's a personal project built to help people be inspired to chase their dreams." This is easily the coolest thing I've discovered in quite awhile. Go to NothingsGonnaStopMeNow.Com and play for yourself. The game was actually introduced in May 2012 so some of you might have already played it, but it's new to me so maybe it will be new to some of you!