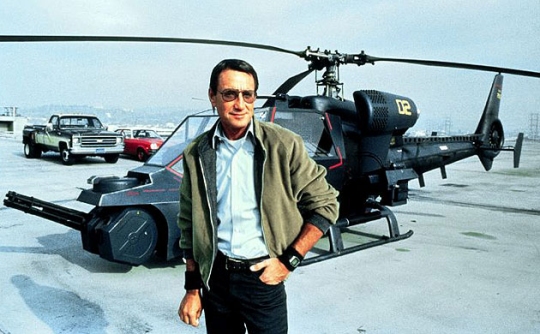 There are many movies, TV shows, albums, and music videos from the 80s that I've retained a little knowledge about but really need to revisit and refresh the old brain cells. The "Rediscovered" series of posts are meant to give a quick history, document what I personally remember, and then give a brief review of my recent interaction. I'll also give you my opinion on whether you should either pass or rediscover the featured item for yourself.

My Personal Recollection
I didn't remember much going into revisiting the movie. I remembered the blue helicopter with the weird looking cockpit of window panels and the gun that stuck out in the front. My only memory as a kid was a large model that my cousin put together and had forbidden me to touch when I visited.

Reaction To Recent Viewing
My main inclination to watch Blue Thunder was to compare to the Airwolf series, which I've recently been watching on Netflix. I remember watching Airwolf more as a kid and because of the R rating, I probably didn't watch Blue Thunder until I was much older than the 8 year old that I was in 1984. I had hopes that the movie would be something I would enjoy rediscovering with Jaws and Seaquest DSV alum Roy Scheider at the helm. I gotta tell ya, I wasn't really impressed. I fully expected that this police assault helicopter would be the star of the movie (ala Airwolf,) but it felt more like a prop. It didn't have the awe factor. Maybe I've been tainted with my knowledge of Airwolf, but the struggle of Scheider's rouge cop character and his personal war with Malcom McDowell dominated the movie over the helicopter's gadgetry. There were some decent action scenes and aerial shots of course. Scheider's interaction with a young Daniel Stern was pretty good as well. There is also a scene where they are spying on the actress and let me tell you, it was EYEOPENING to say the least (definitely didn't remember that) and quite frankly will probably be the only thing I remember from the movie moving forward. VERDICT: Pass on it and watch the Airwolf pilot episode.