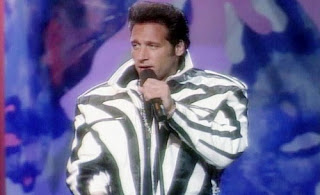 At the pinnacle of his comedic career, Andrew Dice Clay became the first person ever to be banned from MTV. He was invited to the 1989 MTV Music Awards to introduce Cher's musical performance. Back stage, he was given some copy to use for his intro but quickly veered into his adult nursery rhyme stand-up act. The only portion of the copy he reportedly used was introducing Cher as ''a personal friend of mine'' and ''the last puritan.''

22 years later though in 2011, MTV lifted the ban and invited him back to the VMAs. Longtime MTV production executive Salli Frattini commented on the reinstatement that "a lot of people were [saying] he'll never work on this show again, he'll never do anything with the channel again. But we've all moved on, we don't begrudge anybody. I don't even know where Andrew Dice Clay is now. Where IS Andrew Dice Clay?''


If you dare to rediscover the unedited, three minute performance that got him banned for life, click play on the video below. (Warning: Adult Language & Content.)