Bosco And The Blue Lagoon 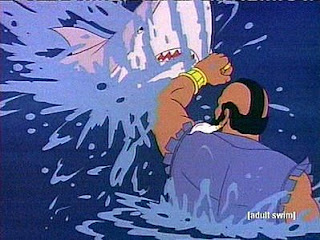 Bosco And The Blue Lagoon

This week's assignment for the League: You are stranded for 10 years on a deserted island. You can take with you the following: One food item (in a never-ending supply), one movie, one game, and one pop culture character.

Being stranded on an island for 10 years and with some of my favorite things, I'm gonna make the assumption that this island is a tropical paradise like in The Blue Lagoon and not one facilitated by Jeff Probst or inhabited by a smoke monster. This island will have some amenities, but the real question is what from the outside world would be a nice bonus to have at my disposal.

I'm gonna assume that they'll be some fruit on the island and plenty of fish that I'll be able to eat and maintain some sort of diet. So the question is, what am I drinking? Does the island have fresh water or will I be filling up coconut shells when it rains? No way I'm dealing with that for 10 years! Besides, you know it'll be hot and having an endless supply of liquid refreshment will be a must. So should I pull a Captain Jack Sparrow and have an endless supply of rum? Eh, I want to enjoy myself on the island and not have a hangover every other day. Maybe Corona? Although I do love those commercials of the people lounging on the beach with an ice cold Corona bottle in their hands. Every had warm beer, though? Ugh, can't stand it. So I'll be requesting a vending machine full of Pepsi Throwback soda while on the island. It'll be cold and the caffeine will keep me going as I'm building my palm tree mansion. It's gotta be Pepsi Throwback too, so I can have a taste of sugar like it was back in the 80s. And the machine will be solar powered, so I can get around that whole electricity thing. Now about that endless supply of freon...

...so apparently there is electricity on this island (and a DVD player.) Look, there are many great movies I could insert here. For me, it really has to be one I grew up with or have watched many times already. Can't really see myself watching anything newer that the mid 90s. Star Wars? Maybe. How 'bout one that would give you some sort of recollection of US civilization and culture like maybe Back To The Future or Karate Kid. Or maybe one that is always makes me laugh like Spaceballs or Dumb and Dumber. It's gotta be one though that has it all. Action. Humor. Romance. Horror. Drama. A skyscraper sized marshmallow man. Ghostbusters has it all, right? So many quotable lines. It's just a fun movie that I could see myself watching over and over again over ten years and really not tire of it. 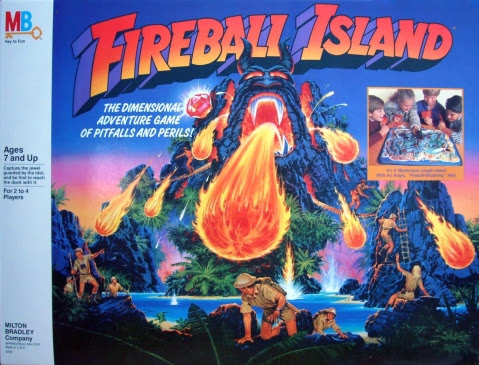 Okay, so there is electricity and some sort of television on this island. Should I go for the whole package and request an NES with Super Mario Brothers and Duck Hunt? I guess that would be pretty sweet. No way, I could take an Atari 2600...I'd last about 15 minutes before I'd be sick of whatever game I chose. (I was more of an outside kid.) I did always enjoy a good board game so what better one to play on an island than Fireball Island! And it would be complete with all pieces and not cost me $300 on eBay. I remember a friend got it for a birthday or Christmas when it first came out. Man, the party was at his house permanently when he had that AND Double Dribble on NES. I guess since Fireball island costs so much nowadays and hard to find complete, I'd want to have something kind of rare to make me want to stay on the island. 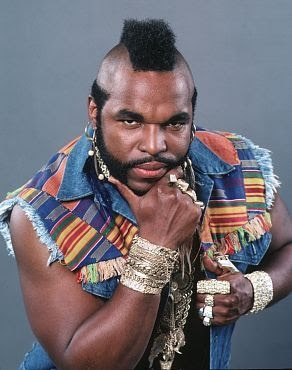 Okay, so who is gonna be my companion all these 10 years to play my Fireball Island game, watch Ghostbusters, and drink cold Pepsi with? Well, since my wife might read this someday I better choose a buddy rather than like Sloan Peterson or Jessica Rabbit. I need a buddy that can help me build stuff (maybe even come with his own set of tools) and is strong enough to lift like trees and rocks. I also need someone that could protect me in case there is natives on the island or we're surrounded by shark-infested waters. I'm taking B.A. Baracus from The A Team. That's right, me and Bosco would be living the high life. We'd build a car out of Pepsi cans and bamboo to get where we needed to go on the island. Hey, maybe he'd even come with an endless supply of Mr. T cereal! But I guess the only thing I'd need to make sure of is that when our 10 years is up on the island, our rescuers would come by boat and not by plane.

Now go check out what other League members are taking on their island:

RetroToySafari brings Star Wars and an endless stomach ache.
VikkiVerka has an endless breakfast with twins.
ThirtyishYearOldBoy brings pizza and a handyman with a utility belt.
NerdRageAgainstTheMachine pretends he's beached near Normandy with a French sandwich.
Newer
Older