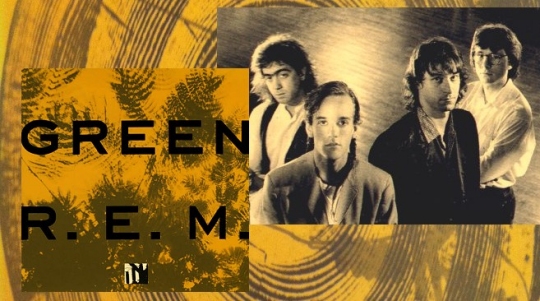 In November of 1988, R.E.M. released their 6th album Green which would launch their recording career into new heights. After fulfilling their recording contract with I.R.S. records, R.E.M. signed with Warner Bros. Records in early 1988 after assurances to have full creative freedom (oh, and also a reported $6-$12 million other reasons.) Despite lead singer Michael Stipe asking his bandmates to avoid writing typical R.E.M. songs and fans accusing them of "selling out" over their label choice, the Green album was highly successful and would be the first stepping stone to their worldwide commercial success in the 90s.

One of my personal favorite tracks by R.E.M. was the first single released off the Green album. "Orange Crush" crushed the competition on the Billboard Modern Rock & Mainstream Rock charts by reaching the #1 spot. In fact at the time its release, it beat the record on the newly formed Modern Rock chart (later renamed Alternative) by holding the top spot for 8 consecutive weeks.


"Stand" was the next single released and would become their 2nd top ten hit after they reached #9 with "The One I Love" in 1987. It would reached #6 on the Billboard Hot 100 pop chart and also peak at #1 on the two rock charts. Personally, this song was too pop for more me to enjoy along with their other more electric rock songs. Plus, I remember the local radio station playing it for what seemed like every hour to the point that I begin fast-forwarding past it on the album.

The most memorable thing about the 3rd single released "Pop Song 89" was probably the music video. MTV urged Michael Stipe (who directed the video) to censor the three topless women in the video. He obliged and also censored himself who was also topless using black bars across the chests of the people claiming "a nipple is a nipple." What was unmemorable about the track was that it peaked at #86 on the pop chart and in the U.K., "Stand" was instead re-released. It did crack the top 20 on the rock charts and was featured during the band's performance on MTV Unplugged.

"Get Up" was 4th single released only in the U.S., but it failed to chart. Stipe introduces the song as his favorite in Tourfilm, the 1989 documentary from their North American tour. The music video was produced by Eric Darnell who at the time was a recent film school graduate. He would go on to co-direct the animated feature film Antz and the Madagascar franchise of films.

Rhino Records is set to re-release the Green album on May 14th, 2013 with a 2-disc deluxe edition similar to the 25th anniversary re-release of the Document album. According to the Amazon description, the Green box set will feature:


the remastered original album accompanied by a disc of live performances taken from the penultimate show of R.E.M.'s 130-date Green World Tour. All 21 songs were recorded in Greensboro, North Carolina on November 10, 1989, just miles from where Michael Stipe, Peter Buck, Mike Mills and Bill Berry had their very first recording session at Mitch Easter s Drive-In Studio in Winston-Salem. The concert captures a fiery set from R.E.M., which had been forged in the crucible of nearly one year of shows. R.E.M. performed most of Green ("Get Up, " "World Leader Pretend" and "You Are The Everything"), while mixing in early favorites like "Fall On Me, " "Finest Worksong, " "The One I Love" and "Perfect Circle" from the band s 1983 debut Murmur. The show also finds the band testing out new songs ("Low" and "Belong") that would appear two years later on Green s follow-up, Out Of Time. The anniversary set is packaged in a hard clamshell box (similar to previous R.E.M. reissues) and comes with four postcards and a foldout poster, plus insightful liner notes by Uncut editor, Allan Jones. Green: 25th Anniversary Deluxe Edition will be available as a 2-disc set and digitally. The remastered album with original art and packaging will also be available on 180-gram vinyl.

Check out the band's official press release and preorder now on Amazon.