RD80s Podcast Debuts This Thursday May 23! 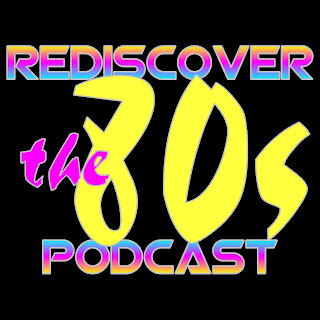 Rediscover The 80s Podcast
"Your mixtape of 80s pop culture"

Over the past month or so, I've been working on a secret project that I'm excited to officially share with RD80s followers! I'll be debuting the new Rediscover The 80s Podcast this Thursday May 23! The experience will hopefully be something fresh and new to those of you who listen to podcast about the 80s.

Here's a little back story about the development of the podcast. I caught the podcast bug around the end of 2011, when I started listening to shows like the UnderScoopFire Podcast, Cold Slither Podcast, and the Retroist Podcast. I have really enjoyed the "Oh, I remember that!" factor that these shows have given me over the past year and a half. As a result of listening to these shows and also being a guest, I thought about starting a podcast for Rediscover The 80s. I had struggled for a long time about what exactly I wanted to do. My first love about the 80s is the music and even produced a couple shows about a year ago that featured Ultimate 80s Playlists.

I wasn't entirely satisfied though and even discussed with my friend and RD80s contributor Wyatt Bloom about producing a show that had a morning drive radio show feel, one that would incorporate discussion and music. Well, a couple months ago it hit me. I still had the notion to do something different or maybe even something that has not been done before on a podcast. No offense to the shows mentioned above and other 80s podcasts I've enjoyed listening to, but I thought maybe there was a fresh approach to rediscovering 80s pop culture than just discussing one topic at a time. Well, I stumbled onto a clip from the VH1 show "I Love The 80s" on Youtube and thought that its format would be great for a podcast! I thoroughly enjoyed the show when it debuted about 10 years ago. The format of the show was always ripe with that feeling of remembering something you had long forgotten or had not thought about in years. It's the feeling that made me start RD80s in the first place!

So I sent an email out to many of my podcasting friends to see what they thought of the idea. All of them were on board and wanted to be on the first episode! So over the last several weeks, I came up with the topics and recorded a session with all eleven of them. I decided to put my own twist on the topics as well and not just speak in general terms; creating several topics that would make the panel choose between items and also be creative. I also decided that I wouldn't give the specific topics ahead of time and just gave them the topic category like Movies, TV, Fads, Food, Music, etc. I wanted spontaneity from each person to maybe have a chance of conjuring up some long lost memories or experiences.

The task I knew would be daunting as I had over 11 hours of audio just from the panel to use as my base for the show. Plus, I wanted to include audio clips from the topics discussed to make it entertaining for the listeners. It was definitely a learning curve, but I felt like my radio broadcasting degree has finally been put to use and hopefully the outcome will show it.

The panel for the first episode will include these eleven panelists:

I'm planning to release the first episode this Thursday May 23rd! Get ready for 10 topics including Movies, TV, Music, Cartoons, Fads, Food, and original topics Drive, Wapner's Revenge, Trapped and Do You Remember?. The podcast will also include a panel trivia challenge which listeners can play along with and a Backwards Song Challenge at the midpoint of the show. And then stay after the credits for an outtake reel from the actual recording of the show in which you'll hear some great memories and stories from the panel that didn't make it into the main portion of the show.