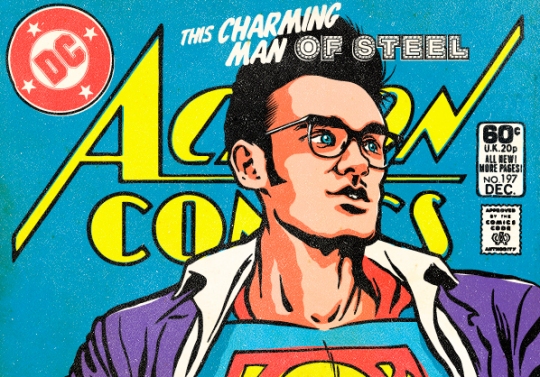 I discovered some really cool fan art today thanks to Flavorwire.Com website and simply had to share! Brazillian artist known as Butcher Billy has posted many pop culture mashup projects on his website and his latest is the epitome of fan art. He has taken classic DC superhero characters and combined them with the faces of '80s post-punk and new wave music in a series of comic book covers. They include Morrissey as Superman, Ian Curtis as Batman, Siouxsie (and the Banshees) as Wonder Woman, Johnny Rotten as Firestorm, Mark Mothersbaugh as The Flash, Billy Idol as Aquaman, and Robert Smith as Plasticman.

Butcher Billy says his inspiration for creating the comic books was:

As a child of the 80's I was heavily influenced by everything from Saturday morning cartoons on TV to the music coming from the radio. Ian Curtis or Johnny Rotten are as iconic to me as Superman or Batman. Real people or imaginary characters, the incorruptible ideals of perfect superheroes or the human flaws and desires sometimes so desperately depicted in song lyrics - all of those influences affect us to the point of defining our character and personality, career paths and life choices.

For larger pics of the comic book cover, visit Butcher Billy's site on Benhance. While your there, check out his other work including "Dead Rockers Modern Times," "The Smith's 8-bit Makeover Project," and my favorite "Time Travel Rock Supergroups."
Newer
Older