The 8 Cheesiest Pasta Ad Campaigns of the '80s 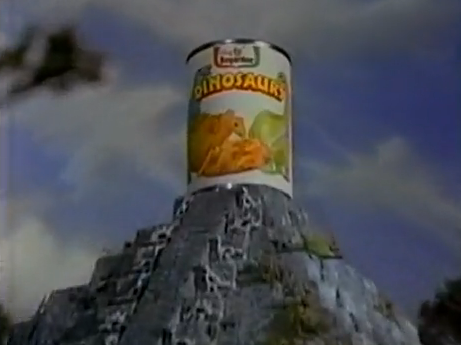 With two working parents, I spent many afternoons after school at my Grandmother's house. She has Italian heritage and knew how to cook authentic dishes. One of my favorite was pasta fazool (pictured right.) I used to eat it by the quart. It got to the point where I preferred it more than hot dogs, baloney sandwiches, or any other typical kid's meal favorites.

I'm knew Gram took pride in what she made and probably rolled her eyes at Chef Boyardee and other canned pasta TV commercials. Sure, it was quicker than cooking a batch of pasta fazool, but she didn't buy into the cartoon characters like we children of the '80s did. Still, she probably figured it was more nutritious than PB&J everyday and once I showed an interest, she would keep canned pasta on hand as well.

But whether you had Italian heritage in your family or not, it was pretty much impossible to avoid pasta marketing in the '80s. See if you can remember these top cheesy (get it?) pasta ad campaigns that made the pasta aisle a close runner-up to the cereal aisle. Click the name links to watch a TV ad on Youtube. 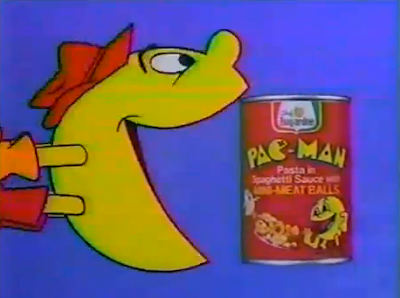 Pac-man was on top of the video game world in the early '80s. By the time 1983-84 rolled around, he had his own cartoon, hit song, and breakfast cereal. Chef Boyardee eventually entered Pac-world marketing with Pac-man Pasta. The novelty of course was that the pasta was shaped like Pac-man and had three options to choose from including "golden chicken flavored sauce." YUCK! I don't remember eating it, but my best guess would be that the golden chicken flavor didn't make you feel too rich. 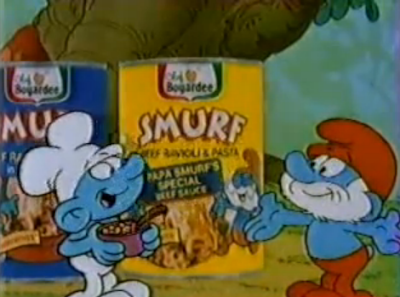 About the same time that Pac-man Pasta was on shelves, Chef Boyadee had also hired the Smurfs to sell pasta. Smurf Pasta marketing included four varieties including "Papa Smurf's special beef sauce." What made it so special? Maybe it was dipped in his smurfberries. Wait...I mean, like the smurfberries he cooked with...oh nevermind. 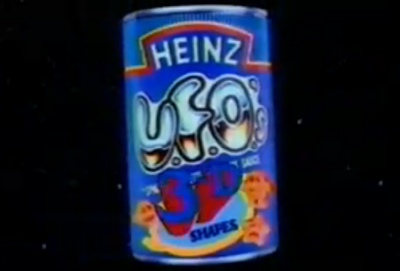 Now here was a product that you could tell was marketed properly. What did kids love to watch in the '80s? Aliens and robots. Heinz's U.F.O.'s had both! The commercials ran throughout the decade which told the story of an 8-bit professor and R2D2 knock-off who are trying to keep the U.F.O. formula safe from an evil robot and his pet star (I can't make this up.) They even used the storyline to promote "Scarios" at one point. 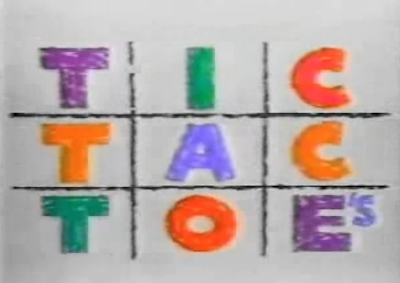 "Tic Tic Tic Tic, Tic Tac Toe's" was another jingle we heard in the mid '80s from Chef Boyardee. At least they didn't have to shell out any endorsement money for this campaign, but I can see why Tic Tac Toe's are not around today. As a kid, what did you want to do with this pasta? Play tic tac toe, of course! And then we got the inevitable "Stop playing with your food and eat!" from the parents. PASTA. FAIL. 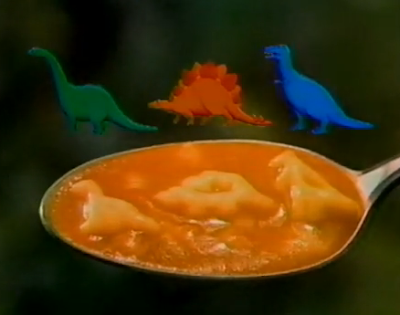 Chef Boyardee went for another traditional kid favorite campaign in the late 80s with Dinosaurs pasta. The adventure consisted of kids dressed in jungle gear, some dinosaur footage taken from what looked like the original King Kong, and a Mayan pyramid topped with the little known god of chunder. "Capture all three (dinosaurs,) and you win!" Win what?? A stopwatch to time your trips to the bathroom?? 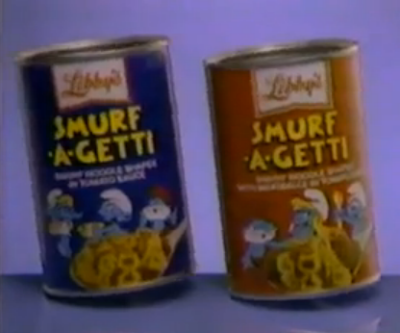 Around 1986, the Smurfs apparently had a contract dispute with Chef Boyardee. They signed a free agent deal with Libby's to produce Smurf-A-Ghetti which was apparently marketed to the urban community. In the ad, the Smurfs (and cans) show off their latest breakdancing moves to a remix of the Superbowl Shuffle. However, the kids appear like they were told to show up for the "Walk Like An Egyptian" video and are confused by the Smurf headspins. What else is confusing? Why is Gargamel's house one of the shapes? 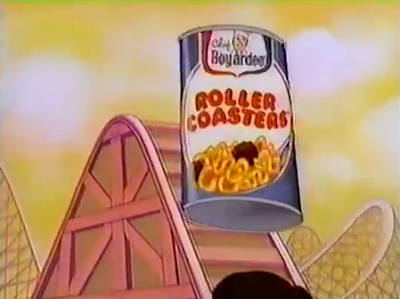 Okay, the idea for Roller Coasters was a little more imaginative from Chef Boyardee. I mean, what kid didn't want to ride roller coasters and pined to be a foot taller at the county fair. My guess though is this idea came from an accident at the pasta making factory. I can see someone calling an emergency marketing meeting..."someone at the factory fell asleep and all the machines produced wavy line shapes!" Then they have to come up with their best idea to cover..."Playground slides? Snakes? Ahh! Roller Coasters!" In the early '80s, Chef Boyardee tempted out taste buds with Zooroni. It was pasta shaped like zoo animals because when we go to the zoo, we all think about eating endangered species. But at least they used typical zoo animals to capture kids attention, like an elephant, giraffe, camel, and ostrich. A camel and an ostrich? Yeah, good call over like lions, tigers, and bears. The biggest mistake about this commercial though...look what they are drinking! Milk! Who drinks milk with pasta? Is it "part of this complete breakfast" or something?
Newer
Older