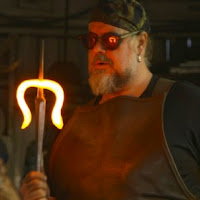 Ever wonder what it would be like to wield a real life Sword of Omens or He-man's Sword of Power? There is one man who can not only say he knows what its like, but has forged these famous swords and others in his own workshop. The Man At Arms web series produced Awe Me follows veteran Hollywood prop maker Tony Swatton and his quest to recreate famous swords and weapons from TV, film, and video games. So far in the series, the 30-year blacksmith has created batarangs from The Dark Knight, Oddjob's hat from Goldfinger, Finn's golden sword from Adventure Time, Jaime Lannister's sword from Games of Thrones, and Captain America's shield. His creations in the Man At Arms series are not props and their real power is displayed after the project is complete.
Four of Tony's projects really caught this '80s lover's eye. The episodes are only about 6-7 minutes so I'll embed my favorites below for everyone to check out. I'd recommend watching the entire series and if there is a sword you'd like to see him recreate, leave a comment on YouTube and you might see it on the show!

He-Man's Power Sword from Masters of the Universe

The Sword of Omens from Thundercats