Totally Rad Wristwatches of the '80s 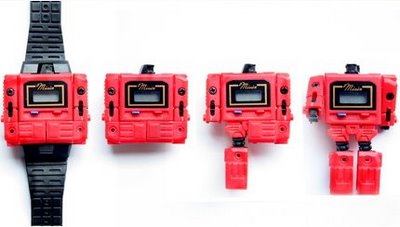 It didn't matter whether you were an ultra nerd or a fashionista, everyone wanted to tell time in style during the '80s. Just like today, we all craved the latest technology which in the wristwatch world included LCD displays and calculators. But maybe you weren't into all that nerdy stuff and just wanted some current styles like Oris Watch offers in the modern day. Back in the '80s, companies like Swatch had you covered if you just needed something colorful to go with your new L.A. Gear outfit.

Here's a quick look back at a few totally rad wristwatches from the '80s... When a popular concept comes along like transforming robots, there are always companies who want a piece of the action. Even today, you can walk into dollar store retailers and find Transformers knockoffs. One of the first was Takara with their Kronoform line of wristwatches and toys back in 1983. The question was, how do you get kids to buy transforming watches without using licensed characters like Optimus Prime and Megatron? Simple, you just make over-exaggerated claims like calling them "high performance magic robots" and "time machines." Did they not think we children of the '80s had imaginations?

The commercials even proposed that they transformed into more than just robots like posing the robot on its head was a "battle station." Please. But whether or not these over-the-top claims and advertising were necessary to sell them didn't matter, because we bought them nonetheless. 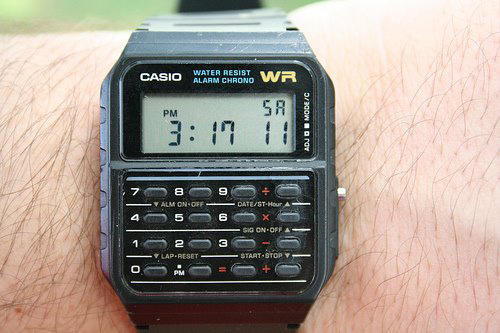 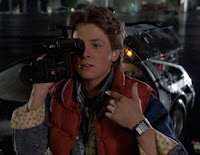 Calculator watches were actually introduced in the mid '70s by Pulsar. However, it wasn't until Casio introduced its Databank series in the mid '80s that they became very popular. And they weren't just popular among the nerds, as hipster Marty McFly actually wore one during the 1985 film Back To The Future. The Databank series were more than just calculators though, they were portable data banks. As seen in the commercial they were able to store information and then recover at a later time. So if you wanted to store the number "5318008" and then show it upside down to your friends later reading "BOOBIES," you could. And the best part, you can still find them on Amazon at a great price. 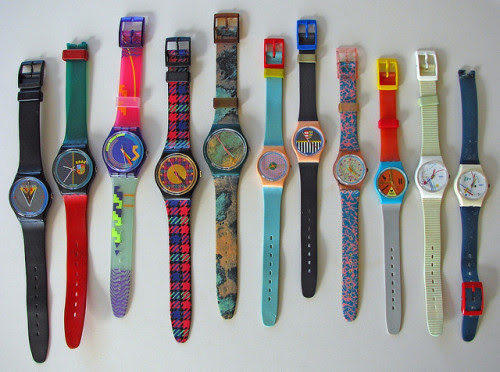 The Swiss watch industry hit somewhat of a crisis in the early '80s combating a high cost to produce quartz watches and the rising popularity of electronic watches out of Asia. With factories dwindling, one Swiss company's introduction in 1983 would revitalize the watch industry as its front-runner. Swatch (taken from the words "second watch") created a market for "disposable" watches to use in casual settings. Their outrageous designs and neon colors would attract kids and adults alike. Other features became popular as well such as the Pop Swatch that could attach to your clothing and the rubber neon-colored Swatch Guards that could be stretched over the face. Some people even began wearing multiple watches, you know in case they were travel to different time zones or something. 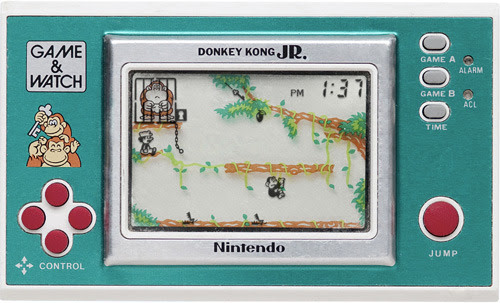 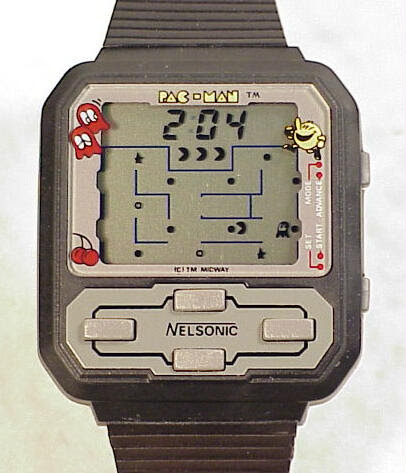 As LCD technology grew in the 80s along with the arcade game industry, handheld games became popular. The natural progression then put games on your wrists with LCD gaming watches. Nintendo came out with a series of "watches" called Game & Watch (emphasis on Game.) They were handheld versions of favorites like Mario Brothers, Donkey Kong, and even included other licensed characters like Popeye and Snoopy from Peanuts. Of course, you could never get away with having these in school, even though there was a watch display in the upper right corner when you weren't playing the game. However, others that you wore on your wrist like Pac-man were a little easier to justify to teachers. Another version of the Pac-man watch even came with interchangeable, colored joysticks. And speaking of colors, there was even a Simon watch that was produced which incorporated the electronic light memory game.

What others do you remember?
Newer
Older