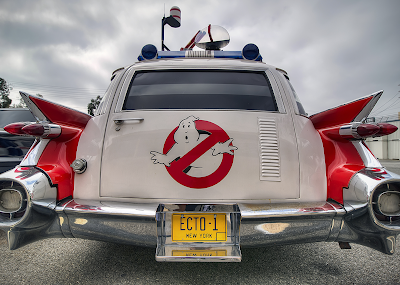 They're baaaaaack! After we ranked our favorites from '80s TV shows just two weeks ago, Hollywood vehicles are back for the all-movie edition of Rank 'Em! Just like television, there were many movies that featured highly unique and downright awesome cars, trucks, helicopters, spaceships, and more.
While visiting Universal Studios in Orlando on my honeymoon, I had the opportunity to get close to a couple of the cars in this list (visit the contact page to see me with Ecto-1.) Seeing these vehicles in person is like being in a fairy tale. We've all fantasized about going back in time, driving through malls, and racing along highways in these iconic vehicles. So when given the opportunity to lean against a fender or even get behind the wheel for a photo op, it almost puts us inside a movie. Let's rank the top 5 '80s movie vehicles you'd like to take for a spin! I've listed several below, but feel free to add your favorites I must have missed.

This week's guest ranker is Cody Mix from Crooked Ninja! Cody is one of the biggest Teenage Mutant Ninja Turtles fans on the planet and heads up the Halloween Blog Collective, a new informal group ready to blog about everything Halloween this October. Click on over and also follow @crookedninja on Twitter to connect! 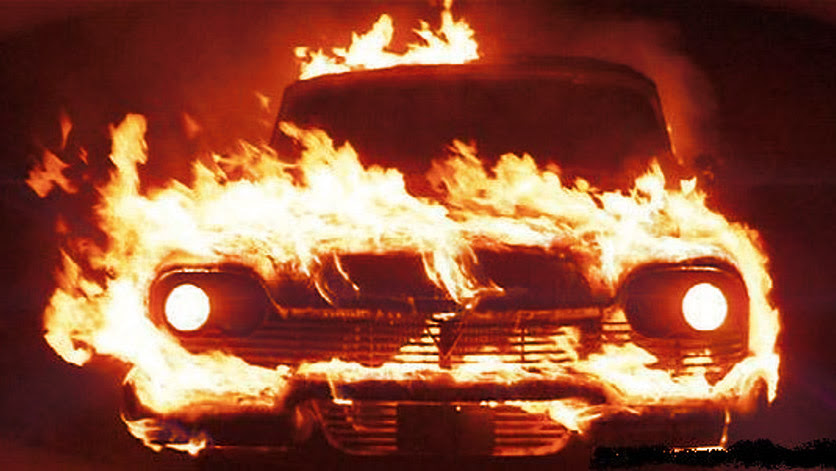 This was a tough list. Movies in the '80s had some rad rides and cutting it down to a top 5, challenging! The beautiful Plymouth Fury from Christine just had to be my top spot. I adore mid-century cars and the whole "lovingly restored back to its prime" theme hits home. I also sometimes daydream my '64 Mercury goes out and terrorizes people at night. Maybe i'm just really weird. The DeLorean Time Machine is a no-brainer as Back to the Future is such a classic. I have my suspicions the car wouldn't be nearly as popular without the movie, but hey gull-wing doors and a stainless steel body make a statement! The Ecto-1 Caddy is incredible plus that siren is such a trademark. Ray picked a solid ride for the Ghostbusters to cruise in. Batman's slick ride from the Batman movie had every kids attention during the release. The Batmobile had enough gadgets and intimidation to make the bad dudes run for the hills without Batman even needing to get out! Rounding out the list is one of the cars I feel doesn't get enough credit, the Family Truckster from National Lampoon's Vacation. The 80's were to station wagons as SUV's are to parents today.

For me, it begins with the DeLorean Time Machine. It's instantly recognizable and so much a part of my childhood. The body style, the stainless steel, the gullwing doors...to a 10 year old boy, it was cool even without the flux capacitor! Ecto-1 is a very close second on my list. I never figured out what all the stuff on the roof was for, but it just seemed to fit the Ghostbusters like proton pack. Every time the Blues Brothers came on cable, I was watching for two reasons...the mall scene and the 100 police car chase at the end. Watching the Bluesmobile being chased has always been good cinema. I also have to include the Batmobile, because who doesn't want pop-up machine guns to cut through walls? Plus, it could drive itself with voice commands almost like K.I.T.T. And finally, I always have to put Spaceballs on a list when given the opportunity. Lone Starr's Winnebago spaceship was totally ridiculous with its jet wings and "I Love Uranus" bumper sticker. Loved it.

Now it's your turn! Leave a comment with your Top 5 '80s Movie Vehicles below! If you want to be the guest in future Rank 'Em post, leave your Twitter handle and you might here from me this coming week. Compile more Top 5 lists by visiting the previous posts in the Rank 'Em Archive!