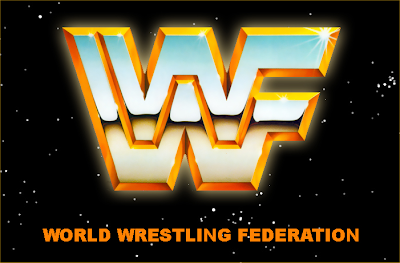 WWF wrestling was as big as Andre the Giant in the '80s. I remember watching Saturday Night Main Event, Wrestlemania, and Hulk Hogan's Rock N' Wrestling on Saturday mornings. All my friends including some girls watched and closely followed the story lines from week to week. WCW fought for wrestling supremacy but WWF was king.
One of the more exciting moments was when the show would return from a commercial break. Crowd was quiet and Gorilla Monsoon would be chatting it up and then bam...theme music! You knew who would be coming down the ramp to wrestle with just those first few sounds! Some wrestlers used actual songs with lyrics and others were just pure guitar adrenaline. So let's explore the best WWF entrance music in this week's Rank 'Em!

The guest ranker this week is Howie Decker from UnderScoopFire.Com! He occasionally let's me invade his site with articles so it's fitting that he finally gets some time on RD80s! Howie has been a huge wrestling fan for a long time, so he knows his entrance music for sure. Check out the smackdown of WWE articles on USF and also podcasts with Diamond Dallas Page and George 'the Animal' Steele. You can also listen to the Wrestling Entrance Music Montage I put together last year for USF's Wrestlemania Week. Connect with Howie on Twitter @HowardTheDeck @UnderScoopFire

l've listed several wrestlers below. Click the name to jump to a YouTube entrance music video. Feel free to add any of your favorites to your Top 5 that I might have missed! Let's Get Ready To Rank 'EMMMMMMMM!!!! 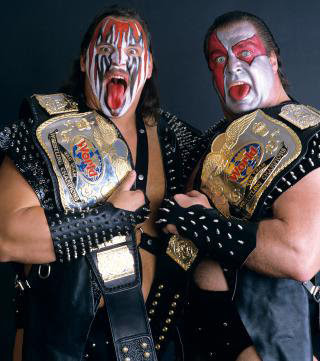 "Here comes the Ax, and here comes the Smasher.." Seriously, put this baby on your iPod, pop in some earbuds and watch your strut instantly become 71% tougher. Demolition's entrance theme put hair on the chests of countless 12 year olds from 1987 to 1991, and added to the luster of one of the greatest moments in Royal Rumble history (in 1989 when Ax and Smash drew #1 and #2.) Whether you loved or hated Hulk Hogan, you have to admit "Real American" was the benchmark by which all other entrance themes were judged. I remember parking a tape recorder against the left speaker of our television set and frantically hitting 'record' as soon as his music hit, so I could play it when my LJN Hulk Hogan action figure made his entrance. There's an official music video for "Real American" in which he headbutts a Soviet flag and wins the 80s. "Pomp and Circumstance" is an iconic orchestral piece, composed in 1901 and commonly used as a high school graduation processional tune. For many, it will be remembered forever as 'Macho Man' Randy Savage's entrance theme, accompanying his own procession to the ring with the lovely Miss Elizabeth. Ultimate Warrior had the most intense ring entrance in WWF history, and his the tempo of his music matched his fervent pace. His matches never lasted long, as he was completely winded before the bell ever rang. The months of memorable vignettes teasing Mr. Perfect's arrival were enough to garner our interest in Curt Hennig's WWF debut. The classy and sophisticated music that accompanied his entrance "perfectly" fit his character.

When I think of the "WWF", it's Hogan and 'Real American' had everything to do with his iconic persona. Can't tell you how much I cheered when I heard the bagpipes for 'Rowdy' Roddy Piper. Whether it was for a match or for Piper's Pit, I was always prepared to hear what crazy stuff he was going to say. The Hart Foundation had a very ZZ Top-like theme which I guess is why I liked it. Definitely my favorite tag team and always wanted to hear Jim 'The Anvil ' Neidhart's laugh. If you were a high school senior in the late 80s or early 90s, it was impossible to not think about 'Macho Man' Randy Savage the day you graduated. With Ms. Elizabeth essentially being the royalty of the WWF, it was an appropriate entrance song. The Ultimate Warrior's theme was pure adrenaline and had the metal sound of mid to late 80s bands. It's ironic that we would wait in anticipation of that song and yet with him always running to the ring, they probably never played more than 30 seconds of it!

Post your Top 5 WWF Entrance Themes of the '80s in the comment section below! Leave your Twitter handle if you would like to be a future Rank 'Em guest. If you want to catch up on previous Rank 'Em top 5 lists, visit the Rank 'Em Archive. Never too late to post your list!
Newer
Older