The Battle Has Begun On G.I. Joe Battleground! 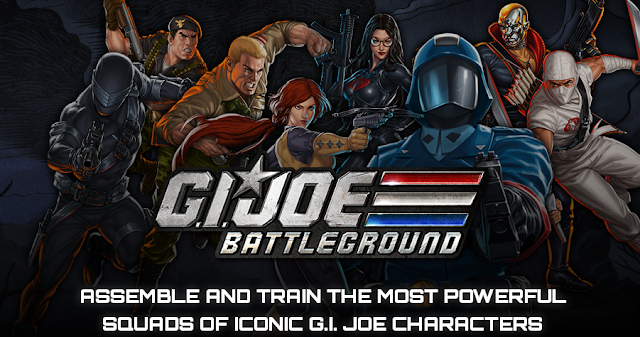 I was in the Google Play store last week and the G.I. Joe Battleground game app was recommended to me. I had no knowledge of it and decided to download it just because it's G.I. Joe. I fired it up Saturday and have been hooked for the past two days! G.I. Joe Battleground is a roleplaying game (RPG) similar to titles like Blood Brothers, Marvel World of Heroes, and Transformers Legends (or so I'm told.) The basic premise is to build the best squad of G.I. Joe characters possible through recruiting and upgrading for use in missions/campaigns and against other gamers. It's the first RPG I've played online as it had that card collecting board game feel that I typically don't play. But I gave it shot though since it had the G.I. Joe name attached to it and now I'm hooked, having quickly progressed through 30 levels. What hooked me? There are many different aspects of the game that keeps it fresh. There is the collecting side where you want to obtain all of your favorite Cobra and Joe characters for your squad. You get to choose a leader for both of your factions to keep throughout the game. Then the quest is on to collect more characters that are categorized by four titles: common, uncommon, rare, and epic. Plus, the characters include all your favorites from the classic series up through the recent G.I. Joe Renegades series. So it's possible to have two versions of the same character on your squad (I have two Destros on my Cobra squad!) And each character has special actions, some that bring vehicles into battle. For instance, Snake Eyes has a Swift Ambush attack and can also call in a missile barrage from a Conquest X-30. Another aspect of the game is missions and events. Choose to engage a Cobra or Joe mission to begin leveling your profile and also upgrading your characters to attack the enemy. Along the path to victory you might encounter player vs. player battles in which you face off with other player squads. Choose Joe, Cobra, or even a Mixed squad to take on PVP challenges. Events are special missions you attempt to complete during a certain period of time to win rewards and special characters. (The current event is again Golobulus!) Check out this game play trailer...


UPDATE: Unfortunately, this game was shut down at the end of 2014. I would love for something similar to be brought back as I really enjoyed this game and rediscovering all the characters and vehicles.
Newer
Older