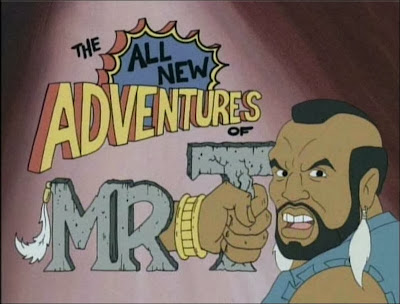 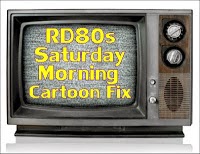 If there is one thing that I miss most about growing up in the 80s, it would have to be watching Saturday morning cartoons! There was nothing like pouring yourself a bowl of your favorite cereal and getting up early to watch great cartoon shows. So why can't we relive a little of that now? Thanks to Youtube, we can watch full episodes of those great 80s animated shows (some of which are not yet available on DVD.) So, come rediscover your forgotten Saturday morning cartoons with RD80s Saturday Morning Cartoon Fix! This week's feature cartoon is Mister T!

Building on the popularity of The A-Team in early 1983, Mr. T landed his own animated series in the fall of 1983. The show starred Mr. T as a gymnastics instructor, leading a team of crime-solving gymnasts. Each member of the team had different backgrounds and thus, brought their own strengths and contributions to the team. Robin, Kim, Jeff, and Woody are the main members of the team. Others include their well-mannered driver Mrs. Bixsby, Robin's little brother Spike who dresses and often imitates Mr. T and Bulldozer, the team's bulldog mascot with a mohawk. Other characters join the team as they travel the world. 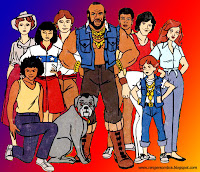 Each episode begins with a live-action introduction from Mr. T himself who explains the situation. After the episode finishes, Mr. T wraps up the show with a moral lesson. It's original run on NBC lasted from 1983-86. Two seasons of 30 episodes were produced with its third season run comprised of 1st and 2nd season reruns. USA Cartoon Express would revive episodes in the late 80s/early 90s and more recently on Cartoon Network's Adult Swim programming. In 2011, Hanna Barbera released the 1st season of 13 episodes on DVD even though the series was actually produced by Ruby-Spears (Scooby Doo, Where Are You!, Space Ghost.) No plans for a complete series release have been announced.

Unfortunately, Mister T is no longer available on YouTube, but here is a montage of Mr. T's live-action segments from the show and a classic 1984 TV commercial for Mr. T Cereal! Enjoy!