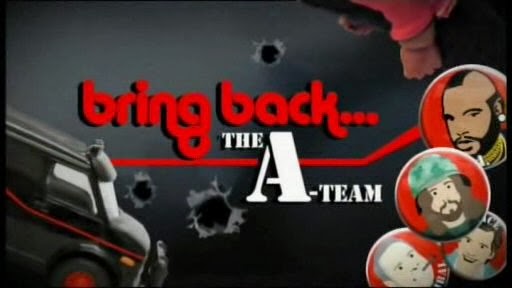 In 2006, twenty years after the A-Team was canceled, the British TV show "Bring Back..." attempted to reunite the surviving members of the cast. Host Justin Lee Collins and crew flew to Los Angeles to hunt down the actors and surprise them with a simple question..."would you be up for reuniting The A-Team?"

As far as I know, this documentary is the most successful reunion of the cast. Justin manages to score interviews with Mr. T, Dirk Benedict, Dwight Schultz, (George Peppard died in 1994,) co-creator Stephen J Cannell, Marla Hensley, Jack Ging, plus many others joined the party at the Fryar's Club in Beverly Hills.

I enjoyed watching this documentary-style show. The actors are very candid in the interviews about their experiences behind the scenes including a rivalry between Peppard and Mr. T and the sexism toward the female actors. The impromptu aspect of the reunion is also very entertaining. Watch the full show below via YouTube! (Quick word of warning that there is explicit language in the show that is unedited.)