A-Team At 30: The Music Soundtrack 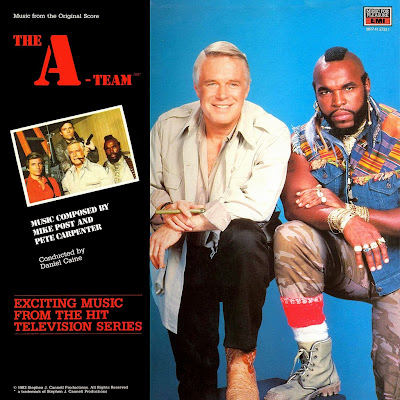 What??!! The A-Team has a soundtrack? Indeed it does. Released in 1984 on vinyl and re-released in 1999 on CD, the soundtrack album features the original theme and music by legendary TV composers Mike Post and Pete Carpenter. Conducted by Daniel Caine, the 15 track album is a journey inside an epsiode of the show. Surprisingly, Amazon has preserved the album in digital form, but before I get into that, let's explore a little more into this piece of A-Team history.

First off, the cover artwork is awesome. Two of the shows biggest stars, George Peppard and Mr. T, are featured on the cover in A-Team gear along with a small shot of the entire crew. The back cover is the glory of Bosco "B.A." Baracus and his mohawk, feathered earrings, gold chains, and warning to anyone who dares to come within range of his fist. 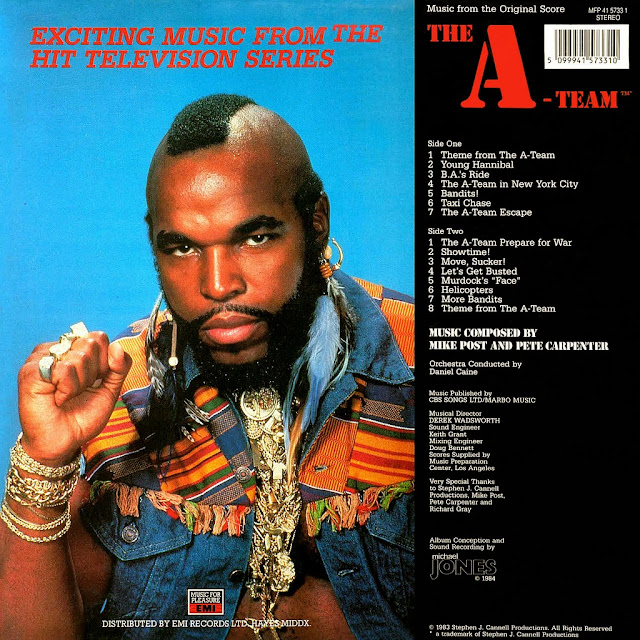 The album features the iconic theme of course, but also original compositions that incorporates elements of the theme. You can definitely hear parts in the track "B.A.'s Ride" which is a windshield view inside B.A.'s black and gray GMC van.

"Taxi Chase" starts out with a "snooping" type feel as if the team is sneaking up on the bad guys. Then the "chase" part of the track kicks in which then fades back into more of a mellow mood.

The final track we'll listen to is called "Showtime" which features a 70s-type groove. It doesn't have much likeness to the theme or previous two tracks until near the end. The horn section fanfares into some familiar elements of the theme, but still not sure when this track would have been used during the show.

Some great memory-filled tracks on this album and a must have for A-Team enthuasists. Just listening to these few songs makes me want to watch some episodes and listen a little more carefully to the music. As I mentioned before, I was really surprised to find the album on Amazon available as an MP3 download. I'm very glad it was preserved and has been really fun to listen to as we celebrate the 30th anniversary of the show. Download The A-Team Original Television Soundtrack from Amazon.