"Murdoctober" is in the home stretch and it's almost time to end the 30th anniversary celebration of the A-Team. But before we put the red-striped van back in the garage, it's time for a game of Rank 'Em with our favorite A-Team characters!! Now, of course we all know the 4 main characters and have showcased a little about each of them this month. But since Rank 'Em is all about top 5 lists, we are opening it up to any of the recurring characters on the show. Col. Decker, Amy Allen, Tawnia Baker, and the supporting cast also contributed to making the show reverred among 80s television history.

All month long, my bud Wyatt has contributed many of the A-Team at 30 articles so it's only fitting to have him be the guest ranker. You can find Wyatt on twitter @infamouswb and on his central PA resource website Clearfield-County.Com. A very big THANK YOU to Wyatt for being a part of RD80s and making this month-long celebration come together like a Hannibal plan!

Below is a list of several characters from the A-Team. We'll pick our top 5 and tell you why and then it's your turn! Pick your 5 and post in the comments. Let's do this! 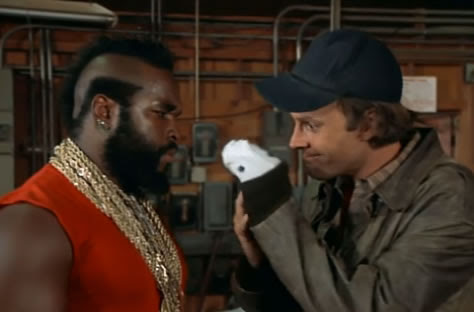 My favorite characters as a kid and also when I watch the show now are B.A. and Murdock. Their constant struggle to work as a team was perfect and brought humor to an action-packed show. The two toy figures I had as a kid were these guys and they together will always be my favorite characters. Hannibal I found entertaining with his disguises when I first watched the show. His cigar-smoking smile is always what made getting the bad guys so much fun. When I watch episodes now, I think I'd put Face ahead of Hannibal. I've come to appreciate his cunning and scams more now then I did as a kid. And of course, he is always the one who gets the girl. Col. Decker might be my favorite recurring bad guy of '80s television. When he was in an episode, you knew there was going to be some great car chase scenes. I've always loved the episodes of shows like Airwolf and Knight Rider in which Lance LeGault guest starred as the bad guy as well. Of the two girls, I definitely think Tawnia was more attractive, but Amy was the better character. She always came through whether the boys needed the inside scoop or an extra gun.

The Infamous WB is back again! Check this trek and let's begin. Thanks for the invitation Jam Master Jay! Here's what I say...Capt H.M. Murdock is my number because of the insanity and the depth that Dwight Schultz portrayed. He was able to latch onto an item, a trait, or play an immense character and then seemingly flip a switch and become a mild mannered man. I also enjoyed the fact that he was a pilot and flew helicopters, my favorite aircraft. Col Hannibal Smith had a great leadership mind and wasn't afraid to get dirty. He also conjured up the wildest contraptions and plans. Though they looked like they had no potential, it culminated into the success of the episode and encapsulated it with that grand saying, "I love it when a plan comes together." Face was a fun character and is my number 3. His knack for sweet talking anyone was genius and the ability to come up with a story instantaneously was brilliant. Wish I had this gift! Amy Allen was a beautiful and eager woman who fought her way into the trust and membership of the A-Team. She was very willing to be a part of the team and, well, I thought she was better looking than Tawnia. Finally, I wish I could pick a single 5th favorite but I really cannot. I enjoyed the characters of both B.A. and Col Decker equally. B.A. was a fun but tough character who had little tolerance for Murdock yet was the jack of all trades for the team. Equally, Col. Decker was that tough guy who continually sought after the A-Team and found comical that he seemed to be like Rosco Coltrane. He was always caught up or outsmarted somewhere, somehow.