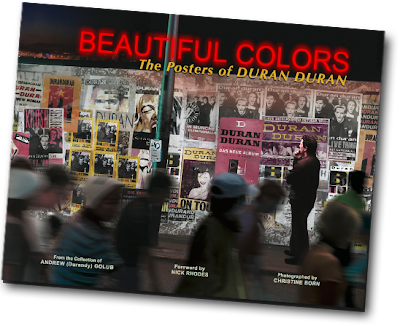 Think you're a Duran Duran fan? Think you've got a large collection of Duran Duran memorabilia? Duranies, you haven't seen anything yet! Superfan and archivist Andrew Golub has one of the most celebrated collections devoted to the British rock band and is now giving fans a chance to add part of his collection to their own.

Over the last 30 years, Andrew (also known as "Durandy") has compiled "the largest Duran Duran archive in the world." Selections from his extensive collection have been showcased at the Rock and Roll Hall of Fame, various TV shows like A&E's Biography, public exhibitions, and in various newspapers and magazines. A large portion of the archive is also available for viewing online at Durandy.Com including posters, photography, memorabilia, and even his most wanted items.

Andrew was gracious enough to answer a few questions for me recently about the book:


What was your primary motivation behind the Beautiful Colors book?

From exhibitions to my website, I believe every step I’ve taken with the archive has slowly moved me in this direction. A book was the next natural progression, as I yearn to make my collection more accessible to the global fan community. Selecting the posters to include was a challenge, but when I set the focus on only official promotional posters (from record companies, concert venues, etc), the choices were clear. However, I think of all the other gems left behind which deserve their own spotlight… perhaps someday a book of posters from the band members' individual endeavors!
Posters are designed to capture attention and ignite the imagination, with a usually limited lifespan — making them a particularly elusive and valuable quarry. Posters represent memories and milestones, for the band as well as the fans, so I feel as if I’m working to preserve history through a medium that would otherwise be lost in time. My book may commemorate Duran Duran’s history, but the memories on each page belong to fans around the world.

How long did it take to complete the book?

Christine and I have been working on the book for over six years. Six long, patient years. Seemingly endless weekends were spent behind the camera, in front of the computer, or transporting posters to and from the archive. The color correction process was possibly most arduous, as Christine strived to make each image match its true colors. I think she had some words for the band when it came to matching all the pinks from the band’s last tour! In the end, she did a spectacular job and we made sure the colors were popping off the pages.

Is there any particular way the posters are organized in the book?

The posters are organized in chronological order, according to album release. Each chapter represents an album, and the posters tell the story: records released, awards won, and tours undertaken. This is a book of memories and milestones – for the band and the fans.

Is there one poster in your collection that you cherish above the others? Is it in the book?

I am very proud of acquiring so many posters from the band’s earliest years, when they were just a supporting act or starting out on their own. Among the big trophies for the archive (and posters that are definitely in the book) are two posters from Hazel O’Connor’s tour which still give me goose bumps, and two promos from the Rum Runner -- a Birmingham club where Duran rehearsed and took up residence as the house band. The more time passes, and the more Duran Duran accomplishes, the more significance these posters take on. I’ve always felt one can better appreciate where the band is now, when one appreciates where they’ve been.

Nick Rhodes contributed the foreword to the book. Have you gotten any other feedback from the other band members?

I have not heard from the other members, although I was informed that upon their first viewing, the band called the book “magnificent.” A perfect word to describe the content, and the legacy it celebrates.

View more of the extensive collection by visiting the media section on Durandy.Com which includes TV featurettes and a poster slide show. A big thanks to Andrew for sharing some insight into the book and preserving some great music history!