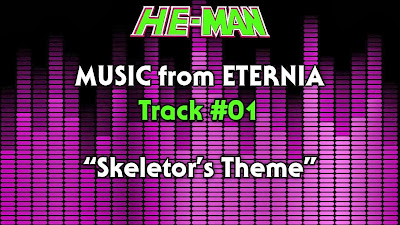 A couple weeks back I recommended everyone to follow the official He-Man channel on YouTube...and here's a small reason why. One of my favorite aspects of the "He-man & the Masters of the Universe" animated series was the soundtrack. The musical composer Shuki Levy who was behind many of the cartoon soundtracks of the '80s and '90s, created the many themes involved with the show. The He-man YouTube channel is now recreating tracks from the animated series for fans to enjoy.

An official soundtrack was never released, but according to the channel, James Eatock and Dusan M. are utilizing original music and effects to recrete the instrumentals. The results of their musical labor is an audio windraider trip back to Eternia. So far, four tracks have been released including "Skeletor's Theme", "Captain of the Royal Guard", "Darkness Rising", and my favorite "Mystical Grounds."

Listen to them below and subscribe to the YouTube channel. New tracks are being released every week!