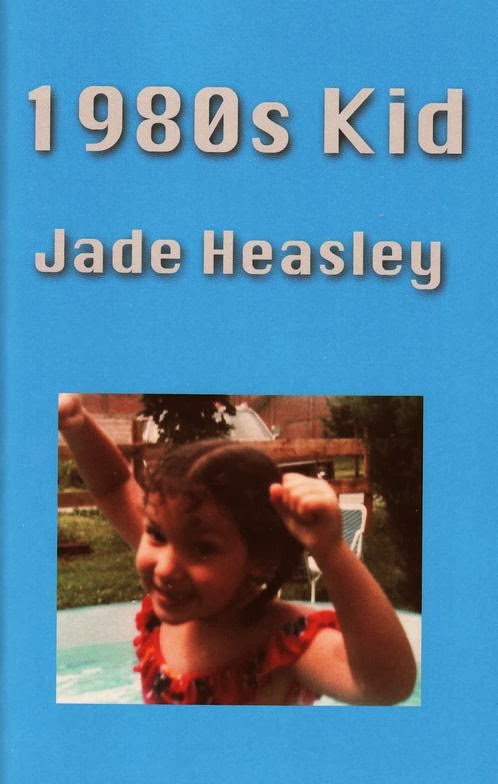 A couple months ago, I received an email from author Jade Heasley about her childhood memoir. With an interest in writing my own memoir, I was naturally interested in reading her book 1980s Kid. With a quick check of her background page on JadeHeasley.Com, I found out we both grew up in central Pennsylvania! Now my interest was peaked.

After making a couple unscheduled trips back to PA this year, I took advantage of flights and layovers to complete the book. Before I get into my review, here is the official synopsis from Amazon:

RD80s Review:
1980s Kid was a great read. For someone like me who is constantly nostalgic for all things 80s, it brought back many great memories of my own. The fact that Jade was into Middleswarth potato chips and shopped at Hill's department store like I did as a kid growing up in central PA made the book even more special to me. But even for you 80s lovers that aren't from that particular geographical area will appreciate the book. 1980s Kid contains the perfect balance of Jade's personal memories along references to pop culture that will make any child of the 80s crack a smile. I highly recommend picking up a copy.

After I finished the book, I decided to ask Jade a few follow up questions:

After releasing the book was there any blowback from your family? (like outing Seth for eating Lego's?)


Fortunately everyone in my family responded to the book very positively. But before it was published I let them read the portions that had them in it so they had the power of veto if they chose. The only objection that anyone had was the one who was trying to grasp the concept of our newly acquired home computer system by asking, "Do you mean that's a typewriter that you hook up to the television? You don't even have to put paper in it?" Initially I had identified the relative by name and they objected to it because it sounds pretty funny by today's standards. They agreed to let me use their quote so long as I didn't identify them by name, and I've kept that person anonymous ever since.

You mentioned some of your favorite songs in the book. Are there any that instantly take you back to your childhood in the 80s?

Absolutely! I would have to say "Take On Me" by A-ha, "Hey Mickey" by Toni Basil, "The Power of Love" by Huey Lewis and the News, "Walkin' On Sunshine" by Katrina and the Waves, "Nothing's Gonna Stop Us Now" by Jefferson Starship, and anything by Bon Jovi. It was watching the video of "Runaway" by Bon Jovi in 2007 that instantly sent me back to my childhood and inspired me to start writing the book.


Looking back on the completed book now, are there any experiences you regret not including?

I don't have any regrets about 1980s Kid but it certainly wasn't a comprehensive memoir. Although there was one Fourth of July weekend where I did get creative with some firecracker pranks when I was nine years old. I may have to write about that in the future, though.


You've written several other novels since your memoir. Any plans to write a novel set in the '80s or expand from 1980s Kid?

I honestly have about 15 to 20 different drafts of different books in various stages of development and I do have a novel that's set mostly in the 1980s that I will probably publish in the next few years. And I have written a few chapters in a follow-up of 1980s Kid that I may decide to publish someday. Time will tell. I have gotten a lot of requests from fans to write more about my 1980s adventures so I just may do that. I wouldn't dream of publishing a follow-up to it unless I was absolutely certain that it was every bit as good as the original.

for just $2.99 at the present time. You can like the book on Facebook and also follow @1980sKidBook on Twitter. Check out JadeHeasley.Com for more information about the author and her other published works.
Newer
Older