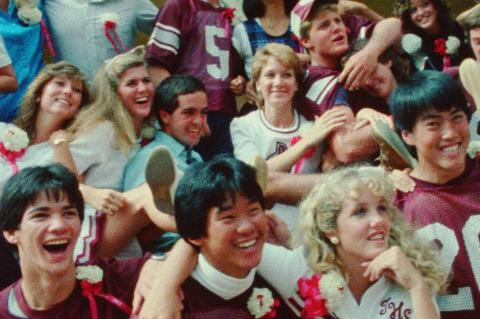 I get pretty excited when I hear about new documentary films on the '80s. Over the past year or so I've found feature length films on the Nintendo Power Glove, VHS tapes, and Back to the Future to name a few. What's even more exciting? When '80s documentaries get remastered. After glancing through a SXSW schedule, I stumbled onto a film called All American High. It was not one I was familiar with, but after I watched the trailer I was very intrigued.

Attached to the SXSW schedule was an email for the film's director/producer Keva Rosenfeld. Shortly after sending, he was gracious enough to respond with the film's press kit including the following synopsis:

In 1984--before cell phones, the web, and reality TV, a young filmmaker set out to document a year in the life of a typical California high school. The result was “All American High”, an unusually honest and humorous look at 80's teen life. Told through the eyes of a visiting exchange student, the film presents an uncensored view of senior year in the era of big hair, punks, and parachute pants. Thirty years after they lived it, the film's original subjects return in "All American High: Revisited" to look back at one of the most memorable chapters of their lives.

The film has been critically acclaimed by the The New York Times, The Hollywood Reporter and The Village Voice. Film critic Michael Medved also gave a great review on his show "Sneak Previews" back in the day.

If you'll be attending SXSW this coming week in the Austin, TX area, you'll have two chances to see the premiere of All Ameercian High: Revisited at the Marchesa Theater. First screening will be Sunday March 9 at 4:30pm with an additional screening on Wednesday March 12 at 2pm. Click here for the official SXSW event. For an in-depth review and interview with Rosenfeld, check out this recent Independent Magazine article. To keep in touch with further screenings, connect with the All American High Facebook page.

Really looking forward to watching this film one day and would love hear your thoughts!
Newer
Older