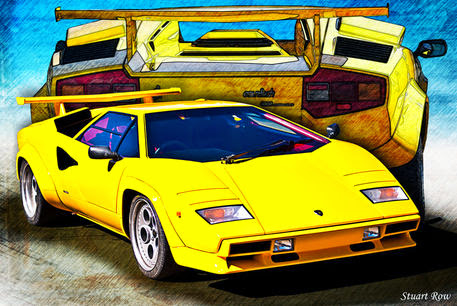 Ladies and Gentlemen, start your stereos! The '80s are known for unique cars like the DeLorean DMC-12 and the Pontiac Fiero and also outrageously awesome sportscars like the Lamborghini Countach and the Porsche 911. So many cars were also made famous in television and movies like the Pontiac Trans Am K.I.T.T. from Knight Rider, the DeLorean time machine from Back to the Future, and B.A.'s GMC van from The A-Team.

Luckily, popular music assisted our fantasies of driving those exotic cars by providing many songs featuring "car" or "drive" in the title. Some songs went as far as giving us the perfect track for particular cars. So for this Ultimate '80s Playlist, I've handpicked 12 of my favorite songs from the '80s about cars and driving. If I missed one of your favorites, feel free to add to the list in the comments!

Cars "Drive" (1984)
- I had to begin the playlist with a song that easily makes my personal '80s top ten songs. Next month marks 30 years since the Cars released "Drive" which turned out to be their highest charting single. Strangely enough, the music video featuring the future Mrs. Rik Ocasek, Paulina Porizkova, didn't feature a single car.

Bruce Springsteen "Pink Cadillac" (1984)
- The Boss' "Pink Cadillac" was actually never released as a single and did not appear on his 1984 "Born in the U.S.A." album. It appeared only as the B side to the "Dancing in the Dark" single and wouldn't be officially released until Springsteen's 1998 "Tracks" boxset.

Billy Ocean "Get Outta My Dreams, Get Into my Car" (1988)
- Billy Ocean would achieve his third and final #1 song on the U.S. charts with this track from the "Tear Down These Walls" album. The song would also be featured in the Corey Haim/Corey Feldman movie License to Drive. The music video was state-of-the-art at the time of its release featuring animation mixed with live-action footage.

Gary Numan "Cars" (1979)
- Released in August of 1979, Gary Numan's most well-known track became a top ten hit in five different countries in 1980. The song's inspiration is said to be from an incident of road rage experienced by Numan in which involved parties threatened to get him out of his car and beat him up.

Tracy Chapman "Fast Car" (1988)
- Chapman's first single earned her international success and three Grammy awards thanks to her performance at Nelson Mandela's 70th birthday tribute concert. In the week's following her appearance, album sales for her self-titled debut topped two million. The song itself describes using a "fast car" to escape a life of poverty.

Sammy Hagar "I Can't Drive 55" (1984)
- Hagar's tribute to speeding was made largely popular through the music video which received heavy airplay on MTV. It featured him being pulled over and thrown in jail for speeding in a black Ferrari BB512i. The song was also featured in Back to the Future Part II during Marty's travel to the alternate 1985.

Prince "Little Red Corvette" (1983)
- The second single from his "1999" album would prove to be Prince's first top ten hit. The car in the song is actually a reference an experience with a woman rather than the actual car. The music video also lacked the sportscar, featuring instead a concert performance of the song.

Cyndi Lauper "I Drove All Night" (1989)
- Lauper's ninth and final top ten hit was actually recorded by Roy Orbison two years prior to its release. His version wasn't released until 1992, but still became a top ten hit in the UK thanks in part to the music video featuring Jason Priestley and Jennifer Connelly. Lauper's version also yielded her a Grammy nomination.

Madness "Driving in My Car" (1982)
Known primarily as a one-hit wonder in the US, Madness drove into the UK top ten a total of 16 times! Reaching #4 on the UK chart, "Driving in my Car" was actually not released on any album until their greatest hits compilation Utter Madness in 1986. The music video is definitely what I enjoy most about the song.

Rush "Red Barchetta" (1981)
Rush's tale of driving an Italian racecar in a futuristic world of overbearing traffic laws can be found on their album "Moving Pictures." The song was never released as a single but can still be heard on classic rock radio. It is inspired by the short story "A Nice Morning Drive" by Richard Foster that was published in the November 1973 issue of Road and Track magazine.

Eddie Rabbitt "Drivin' My Life Away" (1980)
I had to sneak in this country crossover on the playlist mainly for my memories of playing the 45 record on our home stereo. Rabbitt's dominance on the US country charts in the late '70s/early '80s combined with the success of other country hits on the pop chart helped him reach #5 with this tribute to a roadie's life.

Check out some of my other playlists like "Girl Names", "Dream", "Colors", and "Night" by visiting the Ultimate '80s Playlist archive.
Newer
Older
Powered by