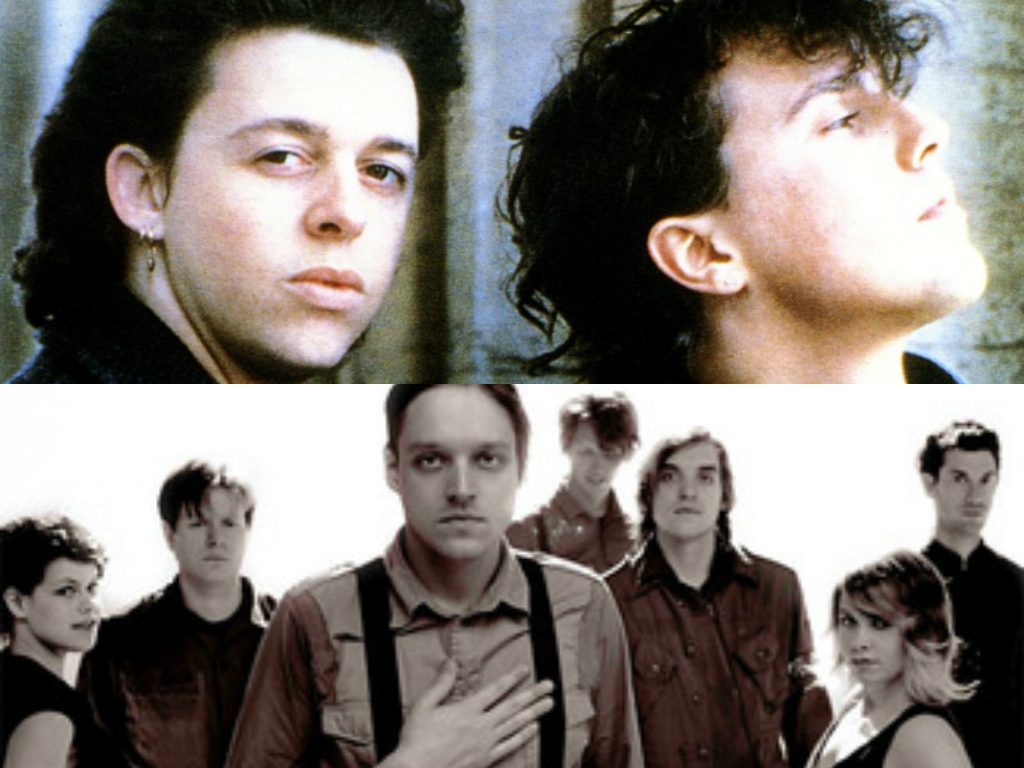 I'm usually the one that complains whenever I hear iconic '80s songs covered by modern artists. It's basically the same reaction I get usually when I hear movies are being remade. Although I usually cringe or roll my eyes, I sometimes get a feeling of respect when the remake is done in a way that it respects the original property.

Over the last several years, I've found the door actually swings both ways in the world of music. While most of us view cover songs as modern artists remaking past hits, there are actually several retro artists that have covered modern tracks...and most are quite good.

When I'm not listening to '80s music (if you can imagine such as thing) I generally listen to modern alternative music. I've heard many covers of '80s songs by alternative bands and even rated a few of them on the UnderScoopFire! website. But I've also heard several covers of modern alternative songs performed by what I would classify as '80s artists too and thought I'd share them.


Tears For Fears "Ready To Start" - For those of you who don't know me, I was a HUGE Tears For Fears fan in the '80s and even into the early '90s. They haven't made much noise here in the US since "Break It Down Again" in 1993, but I found them earlier this year during Record Store Day. They released an 10" record titled Ready Boys & Girls? with three cover tracks, one of which was Arcade Fire's "Ready To Start." I'm not a huge Arcade Fire fan but I LOVE this song and really enjoy the TFF cover.


Wang Chung "Third Planet" - After having several hits in the '80s, Wang Chung really dropped off the face of the planet (which is a shame), but resurfaced with a new album in 2012 and took part in the Undercover series for The A.V. Club in 2013. Their song choice was "3rd Planet" by Modest Mouse which is a lesser-known track from The Moon & Antarctica album. I'm not very familiar with Modest Mouse other than "Float On" but the cover was well received by commenters to the original article.

Peter Gabriel "My Body is a Cage" - Gabriel's Scratch My Back album released in 2010 consisted entirely of cover tracks using only orchestra and voice. Among artists like David Bowie, Talking Heads, Radiohead, Gabriel hauntingly covers Arcade Fire's "My Body is a Cage" from their 2007 album Neon Bible.


Simple Minds "Teardrop" - The most successful single by British trip hop group Massive Attack is "Teardrop" which you might recognize as the theme from the TV drama House. In 2009, Simple Minds released their Graffiti Soul album accompanied with a limited edition all-cover album Searching For the Lost Boys. Included among tracks originally released by Neil Young, Thin Lizzy and The Beach Boys was also an awesome rendition of "Teardrop."

Hall & Oates "Someday We'll Know" - I couldn't get enough of the New Radicals single "You Get What You Give" in 1998...still can't. The follow-up single "Someday We'll Know" was also catchy, but the band broke up even before it's release. However it was popular enough though that Hall & Oates released a cover version with Todd Rundgren on their 2005 album Do It For Love.

Pet Shop Boys "Viva La Vida" - Pet Shop Boys have sold 50 million albums worldwide, so it's amazing to me that their US chart success only resides in the '80s. However, their electronic music has been relevant in their native UK for nearly three decades now. In 2009, Pet Shop Boys released their Christmas EP which actually contained a cover of Coldplay's "Viva La Vida" mixed with their 1988 hit "Domino Dancing."

Can you think of anymore great modern covers by '80s bands? Leave them in the comments!