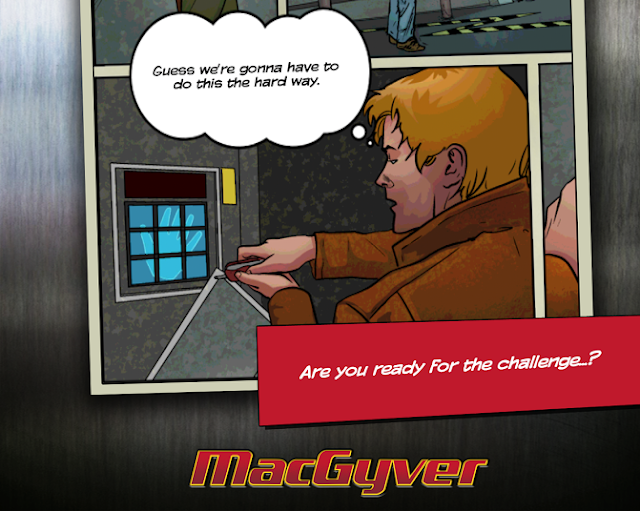 In fact, I was pleasantly surprised by this game. I was a fan of MacGyver back in the day and still enjoy an episode or two on Netflix from time to time. When I heard a mobile game was coming out earlier this year and saw the new character art, my curiosity was peaked. Now that I've played it, I think MacGyver fans will enjoy.

I've slowly entered the comic book world over the past couple years and I think that helped give me a favorable opinion of Fairplay Media's "MacGyver Deadly Descent." The game begins with a story similar to the pilot episode as a digital comic book. For a game, I thought this was pretty cool. After clicking through the story, you come to the first stage of the game. In true MacGyver style, your mission is to use your smarts to get past a series of laser beams, water pipes, key codes, and wires. To advance, you must complete a series of puzzle challenges. For the laser challenges, you use angled pipes and mirrors to direct the laser beam to its intended target(s.) The water pipes involve turning the color-coded pipes to fit properly. Key codes also involve color and strategic maneuvering of the keys. The wire challenge involves connecting like colors in a way to not block the connection of other wires (similar to Tron's light cycle game.)

As you complete a certain percentage of each mission, the next mission is unlocked and the comic book story unfolds. Complete 100% and earn a MacGyver prize like a paper clip or duct tape. There are 6 missions in all, each containing several puzzle challenges. Check out the video below for a brief walkthrough by TheGameFeast...

Here is my assessment after complete 3 of the 6 stages. What I really like about the game is it's pace. The puzzles get harder as the game progresses, but barring a few brainteasers, I was able solve most in a few minutes. Your time is kept for solving each puzzle, but it's less stressful than the usual countdown clock that MacGyver frequently had to beat. Having several different types of puzzles to solve also keeps the game fresh in each mission. And again, the comic book reader in me also liked the break from solving puzzles and just reading bits of the story.

Downside to the game would include that fact that replaying won't be anything new. Upon completing each challenge, you can go back and try to best your original time, but you'll probably want to wait until you don't actually remember the patterns. I'm also not sure the MacGyver purists will like the new look of the characters and the lack of the original theme (I didn't mind so much.)

If you managed to download it last week for free from the Amazon link I posted on Facebook, you got a great deal. Still, for the going price of $.99, I think it's a game worth downloading for fans of the show who like solving puzzles. If you were hoping for more of an adventure game for MacGyver, I'd say pass on this one. Click the buttons below to download from your device's app store.