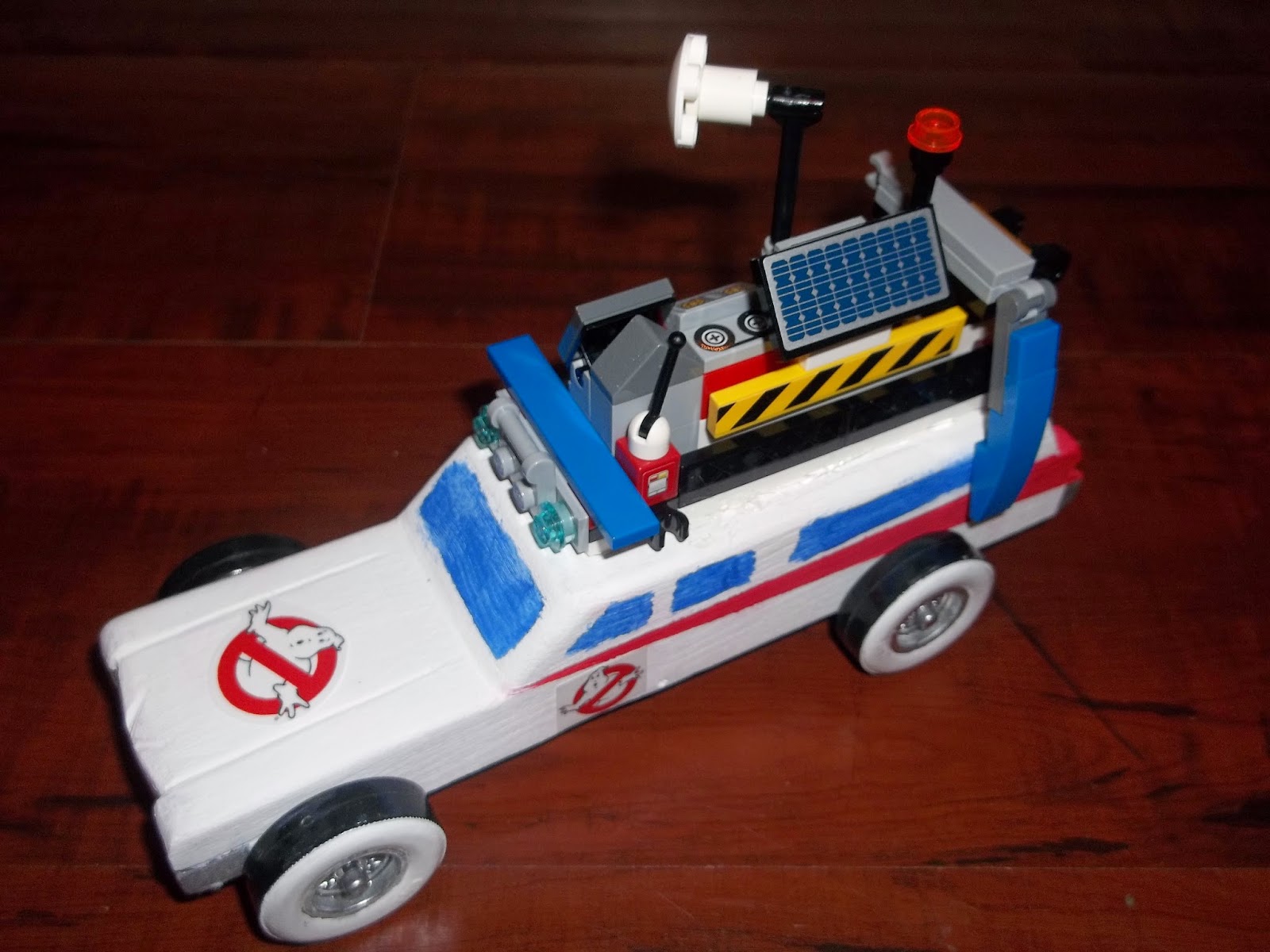 The past few years I've helped my boys with pinewood derby cars for their annual Grand Prix race. I remember entering a couple cars as a kid myself, so it's been a fun experience now as the dad. Each year we've built up our confidence to do a little more and even been lucky enough to bring some trophies home.

Our Grand Prix has an open division so last year I decided to create my own car after seeing dad's and older kids enter cars. The inspiration for last year's G.I. Joe truck came from a decal set I found at Hobby Lobby and an assortment of weapons I have laying around from various properties. I enjoyed the process so much that I decided to do something a little more advantageous this year.

Ghostbusters is a big part of my childhood memories and with its 30th anniversary last year I decided that an Ecto-1 would be fun to ATTEMPT. I had no clue where to start, but I knew the motivation was enough to test my woodworking skills this year. I knew the process would take a long time, so I decided to make the most of being quarantined with flu in November and started then. 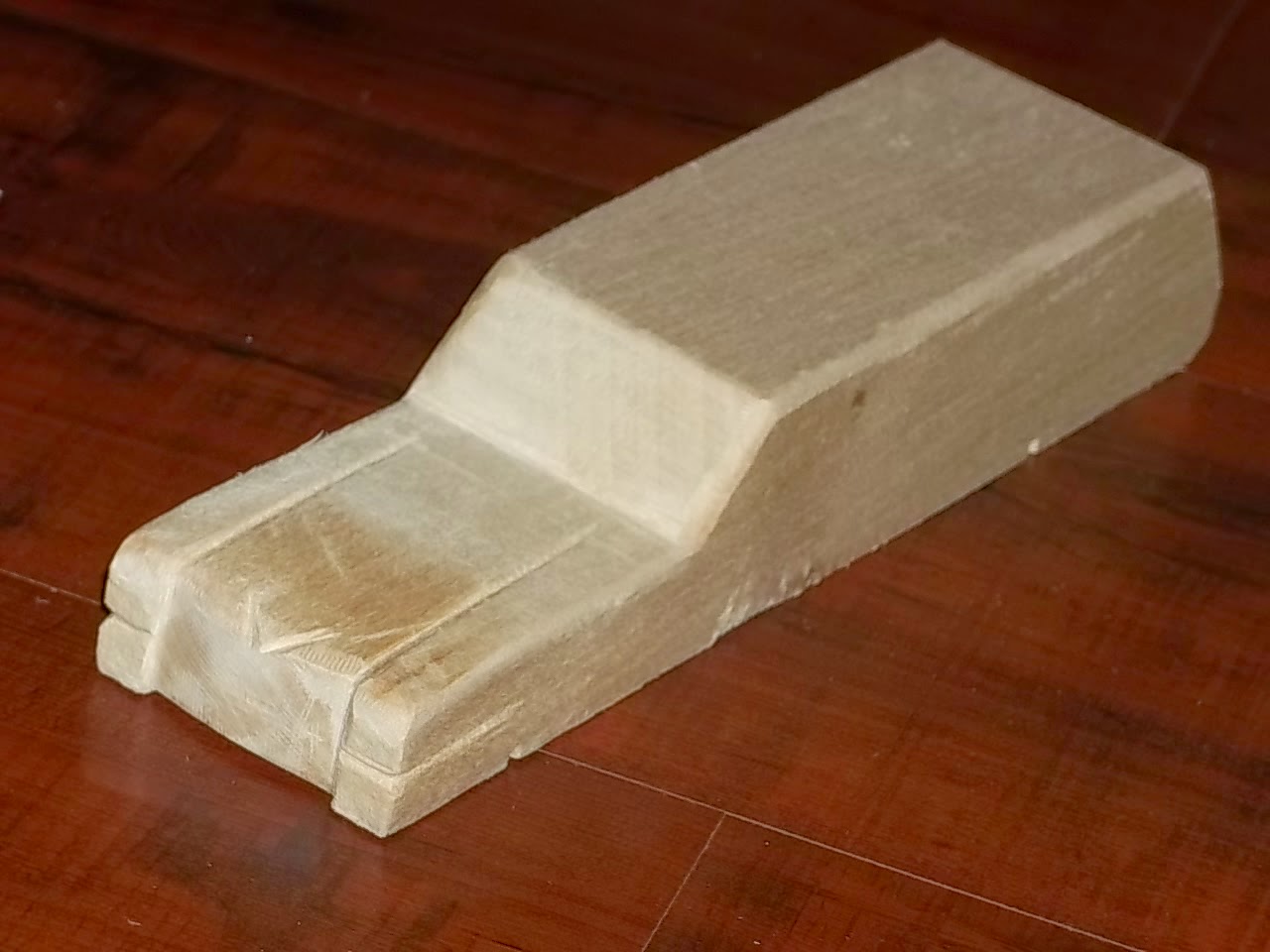 I started with the standard block of wood and cut out a piece for the hood and windshield. Using a set of files and some online pictures, I began shaping the front. I knew the essential details would be the small "v" for the Cadillac symbol and the headlights. I put the above picture on Facebook and had my friends guess what I was making and most thought it looked more like the family truckster from "Vacation". 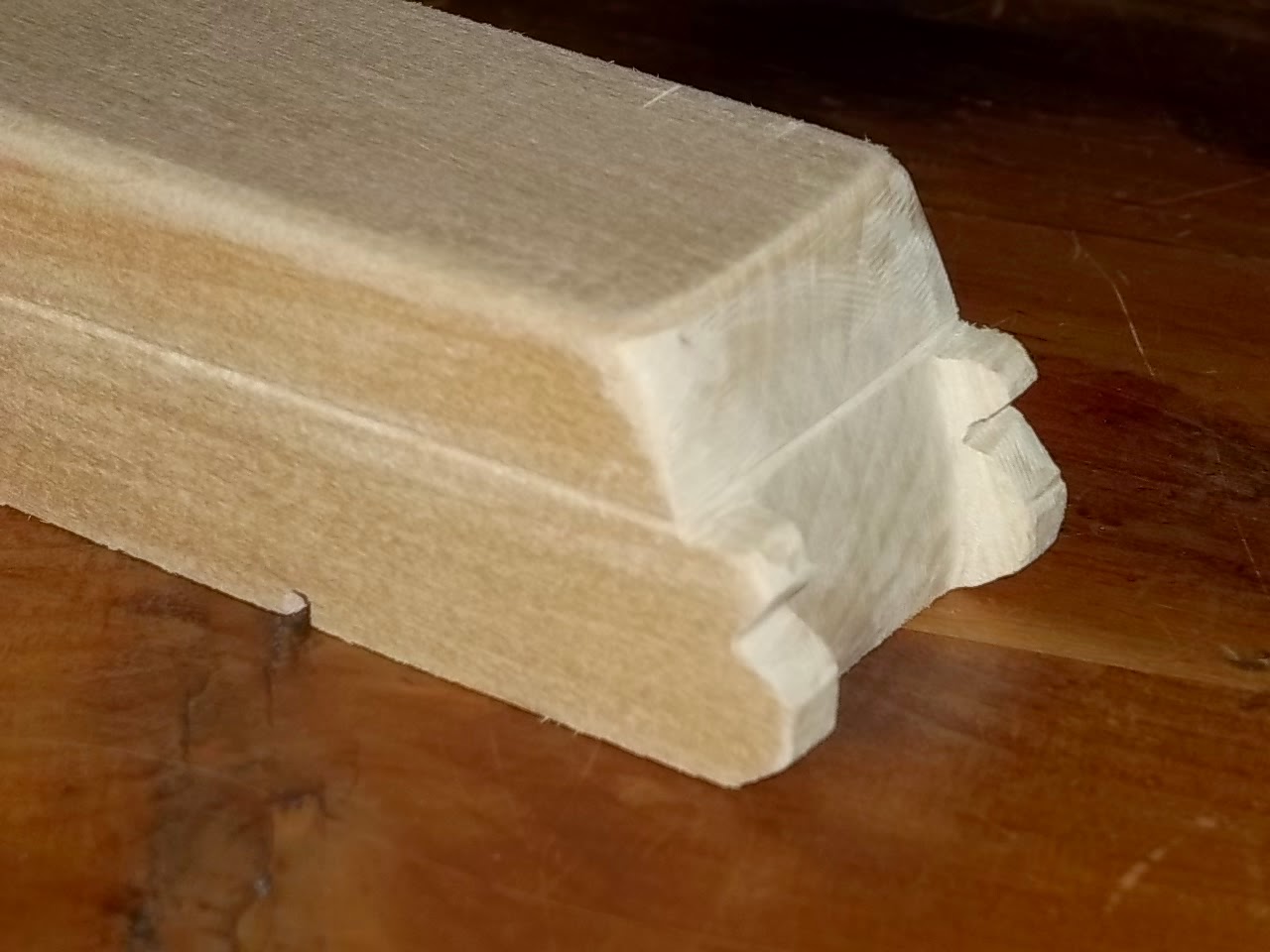 After they guessed Ecto-1, there was no turning back. I added some detail lines and then started shaping the rear. I had no clue how to do the fins. I originally thought I'd have to shape and glue something on, but I guess I underestimated my filing skills. Although not perfect, I was pretty happy with the way the fins turned out. I felt an essential part would be white-wall tires. My original derby car had been destroyed over the years, but I still managed to have the wheels. The spokes I thought would match Ecto-1 a little better so I decided to use those wheels. After multiple coats of white, some metallic silver, and a clear coat, the wheels turned out great! 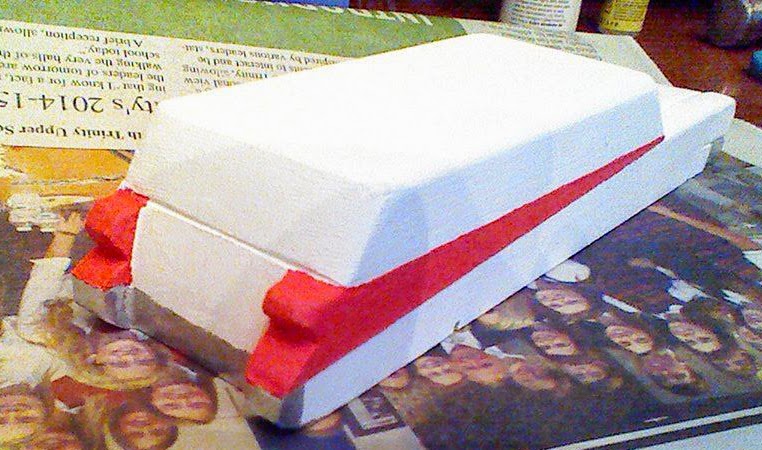 Next it was time for paint! White always takes multiple coats, so I did at least 3 or 4 to make sure it had a good base. Just this past weekend, I used some masking tape to outline the red stripes. The original Ecto-1 doesn't have quite a large stripe, but I figured the extra color would make it stand out a little more than just the red fins. 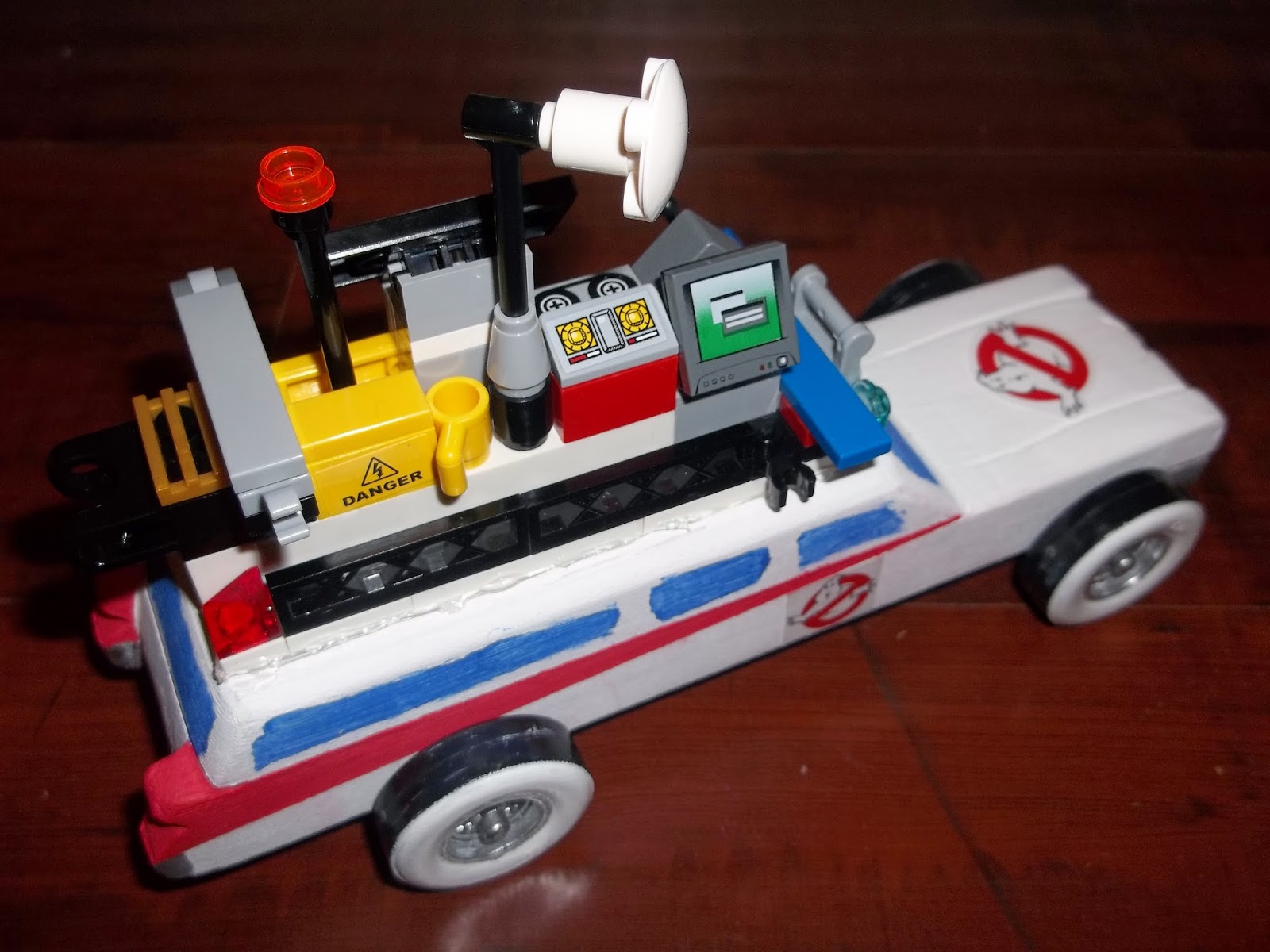 As far as the roof mechanisms and "junk", I wasn't sure what to do. I saved some scraps of wood during the carving process and thought I could glue and paint some pieces to the roof. But then after seeing the Lego set at Toys R Us a couple weeks back and looking through my boys Lego pieces, I decided Lego was the way to go. We dumped all the Lego pieces in the living room Saturday and everyone in the house helped me pick out interesting pieces that might work. I remembered canisters, lights, hoses, and a ladder all being on the roof of the actual car, so I tried to accommodate. We found some solar panels, caution signs, antennas, and a radar dish. I used some smooth blue Lego pieces for the hose, but couldn't find a ladder. After building it, I used some hot glue to secure to the roof. 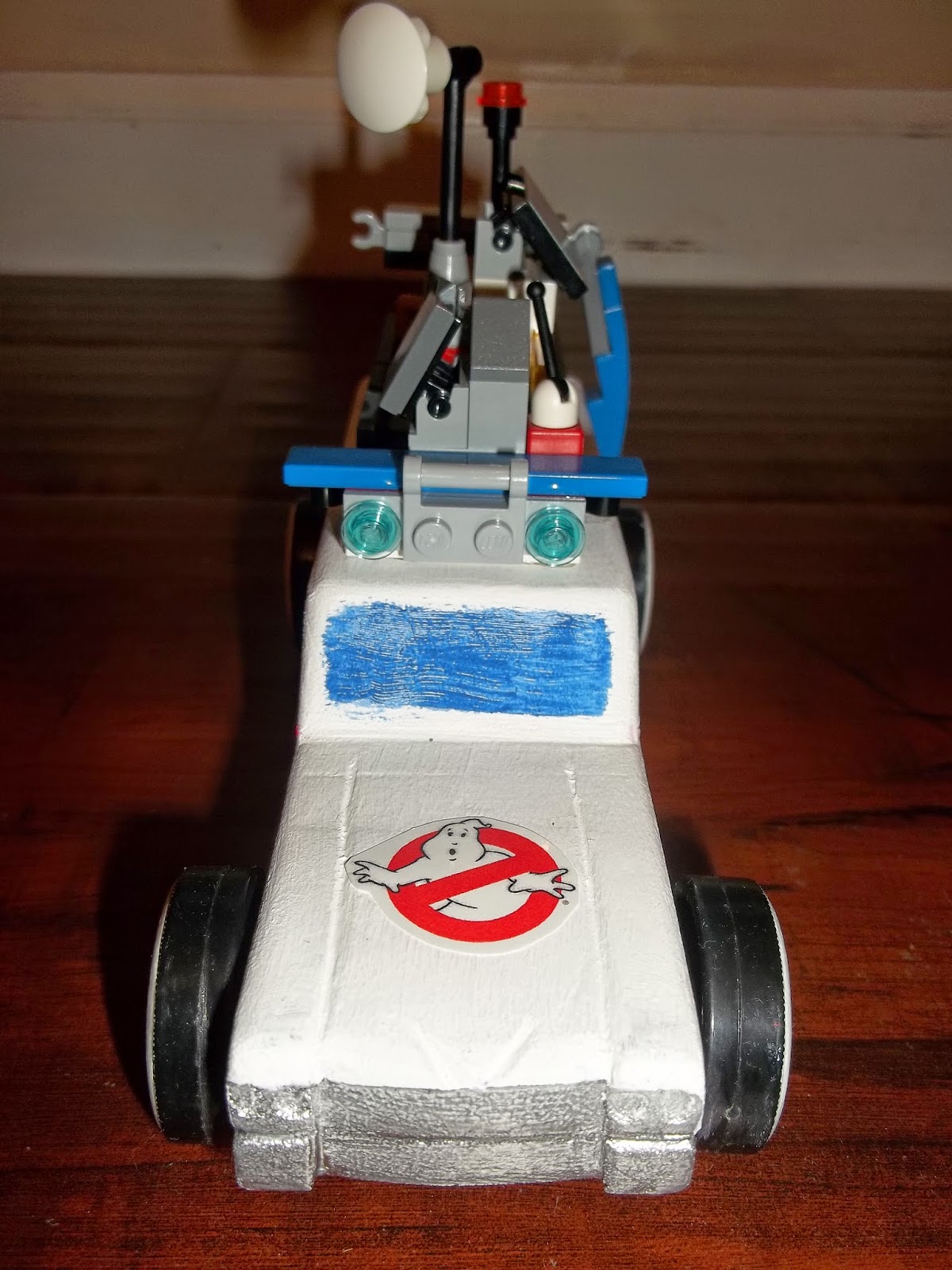 The day of the race, I forgot that I needed some symbols! I hurried into work and printed out some logos on label paper and created 2 for the doors and a large one for the hood (even though it's not standard.) I brushed on some blue paint for the windows and it was complete! 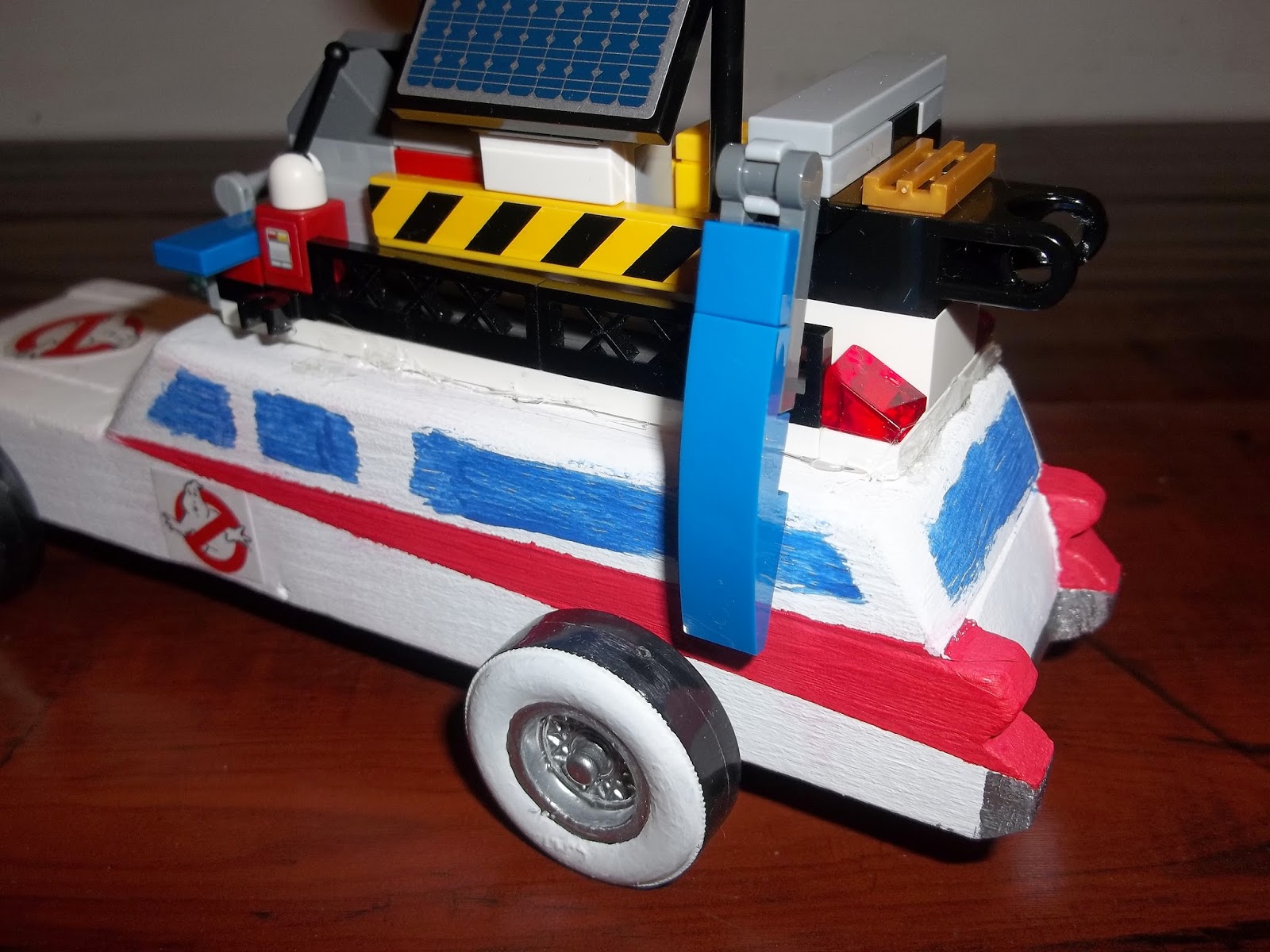 In the end I decided not to race it because I wasn't sure the roof junk would stay on and it was a half ounce overweight. I was given the honor of a trial run to start the derby and it managed to come up just short of the finish line. But the Ghostbusters weren't racers and this was more of a style project. Even though my Ecto-1 derby car wasn't fast, I was grateful that the Grand Prix judges gave me first place for design in the open division. 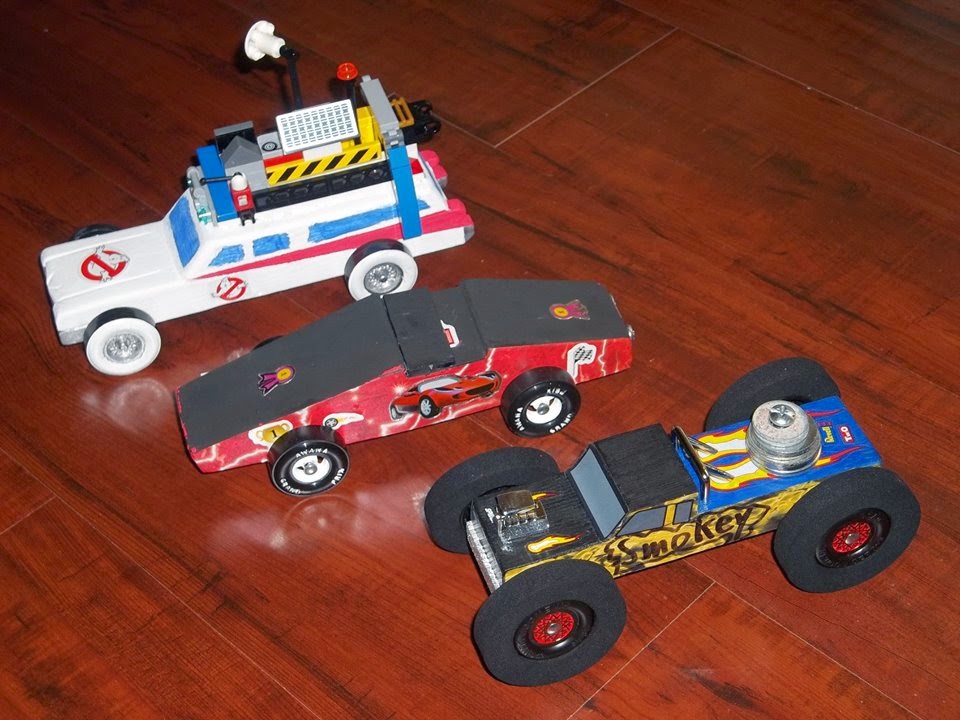 My boys managed to bring home two trophies, 3rd place for speed for my oldest son's "Devil" car and 1st place in design for my youngest son's monster truck "Smokey." (It was a kit we found on clearance at Hobby Lobby. I'm not that good!!)

So now what am I gonna do for next year? Gonna be hard to top Ecto-1!
Newer
Older