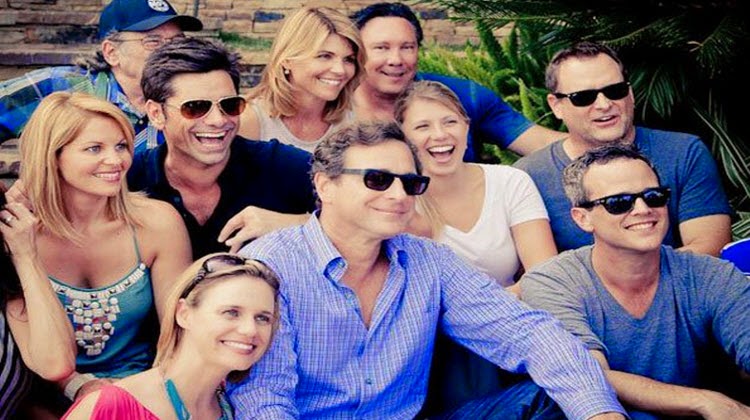 In case you missed it last night on Jimmy Kimmel Live, John Stamos confirmed a "Full House" spinoff will be produced on Netflix. The new show titled "Fuller House" will get 13 episodes to start with a 1-hour reunion episode as the pilot.

Today, a Netflix press release revealed the plot details of the new show which will mainly involve the characters of D.J., Stephanie, and Kimmy. Here are the details:

Netflix, the world’s leading Internet TV network, has ordered a 13-episode season of a new multi-camera comedy from Warner Horizon Television, Miller-Boyett Productions and Jeff Franklin Productions. Fuller House is the long-awaited sequel to the iconic hit series Full House. Created by original Full House creator Jeff Franklin, Fuller House will premiere exclusively across all Netflix territories in 2016. Candace Cameron-Bure, Jodie Sweetin and Andrea Barber are set to star in Fuller House, with fellow Full House star John Stamos set to produce and reprise his original role of Uncle Jesse as a guest star in the new show. Discussions with Full House stars Bob Saget, Mary-Kate and Ashley Olsen, Dave Coulier and Lori Loughlin regarding guest appearances in Fuller House are ongoing. In Fuller House, the adventures that began in 1987 on Full House continue, with veterinarian D.J. Tanner-Fuller (Cameron-Bure) pregnant and recently widowed, living in San Francisco. D.J.’s younger sister/aspiring musician Stephanie Tanner (Sweetin) and D.J.’s lifelong best friend/fellow single mother Kimmy Gibbler (Barber), along with Kimmy’s feisty teenage daughter Ramona, all move in to help take care of D.J.’s two boys – the rebellious 12-year-old J.D. and neurotic 7-year-old Max – and her soon-to-arrive baby. “As big fans of the original Full House, we are thrilled to be able to introduce Fuller House’s new narrative to existing fans worldwide, who grew up on the original, as well as a new generation of global viewers that have grown up with the Tanners in syndication,” said Cindy Holland, Vice President of Original Content for Netflix. In a joint statement, executive producers Robert L. Boyett, Thomas L. Miller and Jeff Franklin said: “The continued support of Full House fans of all ages for the last 28 years has been astounding. It is an honor and a thrill to catch up with these beloved characters and explore their lives today. The love you saw on the show was real. The cast has remained a loving family off screen all these years. We are as excited as our fans to finally bring Full House back to life.”

Sounds like some real-world circumstances will be surrounding the characters which might just work for a modern day sitcom. Guest appearances of the original characters will probably be the draw for this 1st season. It's early in the process but do you think "Fuller House" will have a chance to match the 8 seasons of the original show?