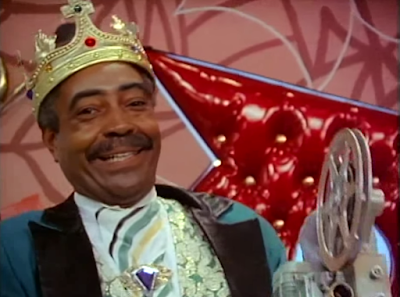 Sad news to pass along today. Pee-Wee Herman reported yesterday on his blog that Gilbert Lewis, the first actor to play the "King of Cartoons" on Pee-Wee's Playhouse, has passed away at the age of 74.

Lewis played supporting roles in both feature films and TV shows throughout his acting career. In the '80s and early '90s, he guest starred on shows like Law & Order, Cheers, The Fresh Prince of Bel-Air, China Beach, Alien Nation and Spenser: For Hire. His film credits included Don Juan DeMarco, Blaze, and Candyman. Of course, his recurring role in the first 13 episodes of Pee-Wee's Playhouse is how us children of the '80s know him the best.

When Pee-Wee's show shifted from New York City to the west coast for the 2nd season, Lewis did not travel and his part was recast by William Marshall. Pee-Wee offered this sentiment to Lewis:

He was a terrific actor and wonderful man – – very nice and very serious about acting. I liked him very much. Sending my love to his family and friends.

My kids have experienced the show for the first time over the last month or so on Netflix and I've enjoyed rediscovering it myself. They were quick to point out that there was a new king in the 2nd season and asked me at one point about why that happened. I never did research it, but I guess I have my answer now. RIP Gilbert Lewis, the King of Cartoons.
Newer
Older