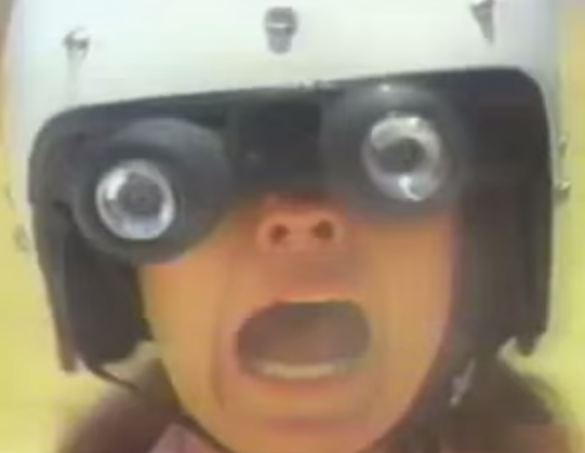 The video game market was completely saturated with games and consoles just before the industry imploded in 1983. What that meant was video game companies were willing to do just about anything in their advertising to differentiate their products from their competitors.

The result was some wacky and ridiculous TV commercials that aired in 1983. Exploding heads, beach babes, John Madden, and Mad Max-type races through suburbia were just some of the tactics used to make us visit our local department store. In that competitive environment, it's hard to blame them for some of these concepts although I've watched documentaries with game developers using drugs so that might be part of the reason too.

So here's the conversation I imagine started the concept of this commercial. Person 1: "Those corporate executives are always trying to keep us down." Person 2: "Hey, how about we take out our frustrations from "the man" in the new Pole Position commercial? We could verbally abuse him and drag his entire family through a Mad Max gauntlet of racing and heavy metal music!" Person 1: "Right, and then we could have these acid trip sequences."

Here's your slogan for the ad..."Dig Dug, tapping into the fears of California residents since 1982."

Somebody needs to force choke a chill pill down this guy's throat. The only way I'd get that excited over a Star Wars video game is if it was for the Wii and came with a light saber controller. (Hey wait, that's actually a good idea! Why did that never happen?)

Sand powered video games...I don't think Mr. Wizard could even pull that off. However, it appears Atari did get the target market about right for such a concept: 1) Guys who wear skin-tight striped shirts. 2) Girls who can't pour water worth a damn.

Like, let's put the most annoying sounding person in the world in our commercial! It will be a hit, for sure! This ad might have worked if you were totally selling a shopping video game at $500 each, but what valley girl ever cared about saving money?

Here's how this meeting went: Person 1: "Quiet down people. We have a shoestring budget for this new G.I. Joe game. Anyone have a suggestion?" Person 2: "One of us could do it. How about Herb, he's between projects right now." Person 1: "Wait, doesn't he suffer from bipolar disease?"

When you don't understand what words to Smurf, just "Smurf it all!" That's probably how my dad felt when he tried to get into my world back then, but I think it was more frustration than the dad's "excitement" depicted in this ad.