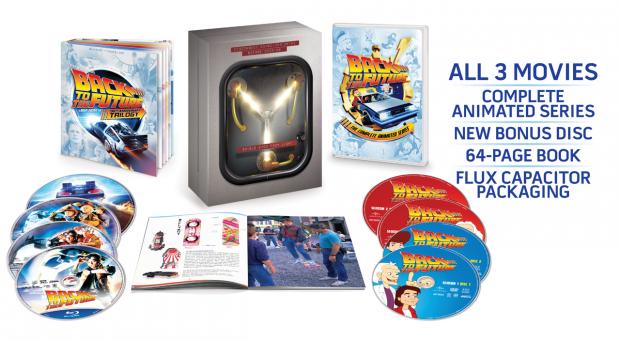 The future is here and new official Back To The Future goodies will be available this October in time for the 30th anniversary. BackToTheFuture.com has just given us a sneak peek at the new items which will include a new Blu-ray release of the trilogy, a DVD release of the animated series, an Ultimate Visual History book, and picture disc vinyl soundtrack! And if that wasn't enough, Universal Pictures has confirmed that the original movie will be re-released to theaters on October 21, 2015! Great Scott!!!

The new 30th anniversary "Complete Adventures Limited Edition" set truly has it all. You''ll get all three feature films on Blu-ray and Digital HD with UltraViolet, Back to the Future: The Complete Animated Series on DVD (26 Episodes), a new bonus disc with over 2 hours of content, a collectible 64-page Visual History book, and light-up Flux Capacitor packaging! Preorder price on Amazon is $99.


If you just want the Blu-ray/Digital/Ultraviolet set, it will cost you $50 on Amazon. (DVD is $40.)
If you are like me an already own the 25th anniversary trilogy set and are interested in collecting the Complete Animated Series DVD set alone, preorder price is $50 on Amazon. That's pretty steep if you ask me so I'd try to sell your old set and snag the complete package if the cartoon series is a "must-have." 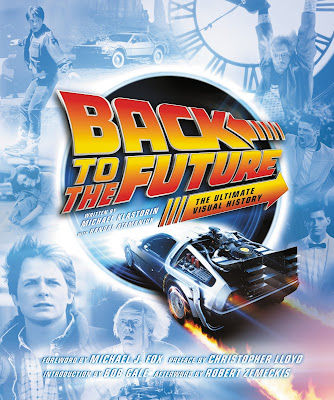 The new Ultimate Visual History book came as somewhat of a surprise on the heels of two books already released this year (We Don't Need Roads: The Making of the Back to the Future Trilogy and Back To The Future Almanac 1985-2015.) However, after I read the description and all the goodies included, this will be an amazing collector's item. It will feature these removable items:

To me, those items alone are worth the $26 to preorder the hardcover version on Amazon.

As far as the picture disc vinyl soundtrack, it's scheduled to be released to record stores on October 16, 2015 through Universal Music Enterprises. No images have been released to this point.

Add in the miniature hoverboards, the comic book series, and the LEGO Dimensions toys I've already reported about and you've got some great collectibles to celebrate the 30th anniversary! What are you gonna pick up?