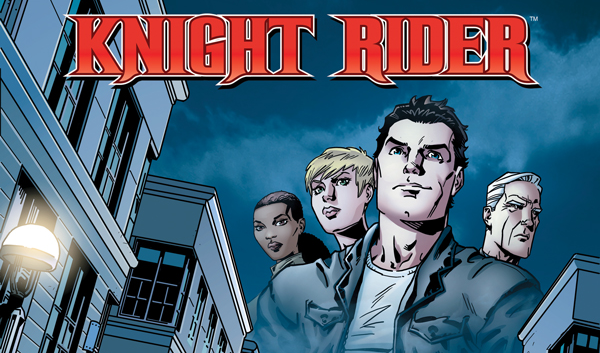 Way back in 2013, I told you about Lion Forge Comics teaming up with NBCUniversal to create new digital comic books based on five classic '80s TV shows. I have been meaning to visit these comics for a long time, but now I've got no more excuses! Lion Forge just recently gave me access to some review copies so looks like I'll get to share all my findings right here.

My friend and RD80s contributor Wyatt Bloom will also be lending his opinion as we team up to tackle some of our favorite franchises. The first comic we'll be looking at is Knight Rider #1, the first of 8 issues in the Volume 1 set which was just released this month on paperback. Knight Rider #1 is also currently available for digital download on Amazon or the Comics Plus app. Here is the official synopsis for the series: 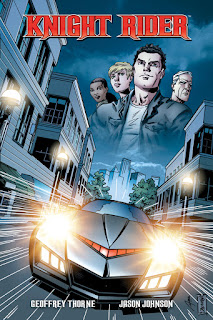 Michael Knight and KITT, everyone's ultimate dream car, –return to action in this high-octane thriller, updated with tomorrow's tech to combat the threats of today. Secret agent Michael Knight just wants to take his girlfriend Katherine out for a night on the town. The bad news is that Katherine is also a brilliant scientist whom he's been assigned to protect, along with her top-secret Project: Rider not a good combination for a romantic evening! When a team of mercenaries crashes their date, it's up to Michael and the mysterious Bishop to keep Katherine safe and the project under wraps. What follows is a high-speed race through the streets and mountains of California in which loyalties are tested, alliances betrayed, and a global conspiracy is revealed. And, of course, at least one incredible talking car! All the turbo-charged thrill of the classic TV series is back in this high-tech spy-fi adventure!

Wyatt and I are huge Knight Rider fans and have been since the TV series debuted in 1983. I have reviewed the entire original series at least twice in the past couple years with my boys on Netflix. Wyatt owns the original show on DVD and also brings along his extensive knowledge of the Knight Rider movies in the '90s and the more recent TV series that aired in 2008. You might also remember our adventure last year to meet K.I.T.T. and some of his Hollywood pals. Needless to say, I think we both are excited to determine how the new Knight Rider comic series fits into the franchise's history.
If you are subscribed to the RD80s podcast, check out the new episode Knight Rider: Memories and Comic #1 Review. If you are not subscribed, search "Rediscover the 80s" on iTunes, Stitcher, or your favorite app to subscribe now! You can also stream below.

Here are our overall reactions to the first chapter of the Lion Forge series: 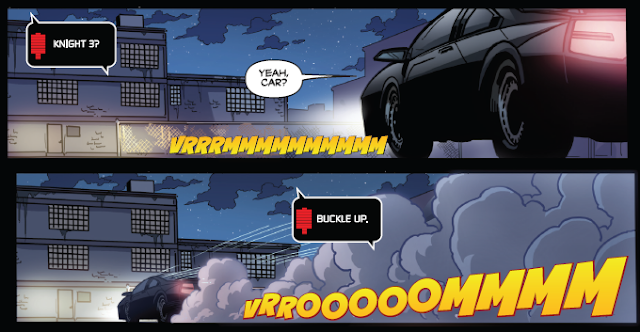 Like Jason, I saw the headlines about the comic books on my Knight Rider fan page feeds and had not been able to put the time into this relaxation investment until Devon, I mean Jason, assigned me with this mission. I wish I would have read it sooner.

Where to begin without giving much of the details away? I am incredibly blown away by the detail and creativity throughout the comic. The comic is nearly jam packed with action intermingled with a few flashback moments to grab both the relics and the new pawns.  Michael's ride is perfectly updated to resemble the original Trans Am KITT, yet modernized well without being too over the top or out of spec.

As Jason notes about my knowledge of the reunion movie along with the Team Knight Rider and 2008 series, there are pieces interwoven from all of these entities into this comic while rooted more so from the original series. Though comic books have not been a big item for me, I am very eager to read the next issue as well as the Airwolf series that Lion Forge has created as well. Whether novice or expert, I wholeheartedly recommend you grab a copy of the Lion Forge Knight Rider comic book!

I've only gotten into the comic book world over the last few years and as a fan of '80s culture, have mainly collected books from that era. I've read a few what I would call "modern retro" books like G.I. Joe, but haven't put much time into more like Knight Rider, Miami Vice, and Airwolf. I truly intend to now.

Knight Rider #1 was enough to convince me that the franchise is in good hands. It's a modern adaptation and origin story which holds enough canon of the classic series while still being a unique story. It's difficult not to compare to what we know as Knight Rider and judging just the first book in the series (and it's cover) that more similarities are ahead. I liked the new story which begins as a puzzle of flashbacks and current events. Mystery, action, betrayal, and even romance shine through as you follow Michael Knight on this initial journey. After the dust settles, a new dawn rises as he attempts to pick up the pieces left behind and find purpose.

Michael is still the young loner. His new weapon against crime is still a state-of-the-art talking car. To me, those facts combined with action-packed story should be enough for fans of the original series to enjoy Knight Rider in the modern age. Even though I'm late to the show, I do plan to read all 8 comics in the series and review them here on RD80s.

From the time I completed the book, I immediately wanted to talk about it with Wyatt. There was just so much on my mind and really wanted to get his reaction. So we've decided to bring our review and our experiences as Knight Rider fans to a podcast! We'll be talking about the franchise's history, our memories, and then go in depth on Knight Rider #1.