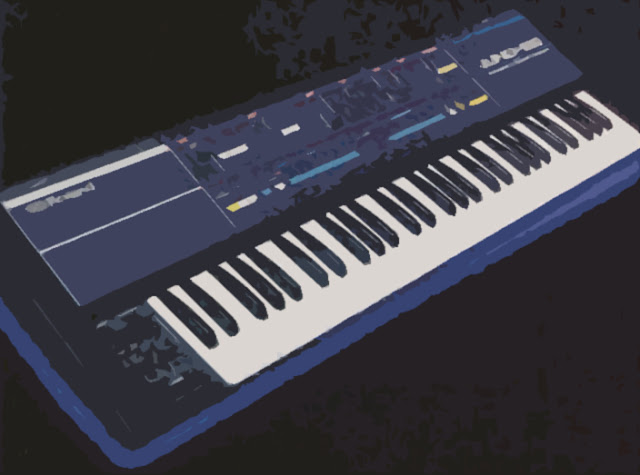 The use of synthesizers in popular '80s music ushered in a digital revolution. Pioneers in the '70s like Kraftwerk and Gary Numan influenced more artists to incorporate polyphonic and digital synthesizers into their music. "Synthpop" emerged from the new wave scene in Europe and influenced many more genres in America including hip hop and rock.

By the mid '80s, the impact of the synthesizer reached from a showdown at the Grammy awards to instrumental hits on the pop charts. The Yamaha DX7 released in 1983 and the Roland D-50 in 1987 not only made synthesizers affordable but also continued to improve the technology. The result gave us several singles that featured killer synth riffs. I managed to put together a list of 12 hits in the '80s (plus a few honorable mentions) that defined the impact of the synthesizer on popular music.


"Sunglasses At Night" by Corey Hart (1984)
One of the definitive tracks of the '80s overall features an epic hook of rhythmic chords. Hart's anthem to night vision peaked at #7 on the US pop charts, but surprisingly only #24 in his native Canada and didn't even chart in the UK. I guess we Americans were the only ones who didn't mind being impaired.

"Safety Dance" by Men Without Hats (1983)
This synthesized dance hit first caught on in the band's native Canada and then grew to become a worldwide hit, charting in the top ten in 12 different countries. The lyrics were penned after lead singer Ivan Doroschuk was not being safe while pogo dancing at club.

"Don't You Want Me" by The Human League (1981)
Although the signature synth hook is played just three times, the track's huge success still makes it instantly recognizable. It was the #1 song of 1981 in the UK and would reign for 3 weeks atop the US pop chart the following year.

"Rockit" by Herbie Hancock (1983)
Although it wasn't a pop chart hit in the US, Hancock's influential record made waves on the dance floors, MTV, and pop charts around the world. The highly recognizable synth riff on the instrumental track might not be the most definitive part as it's recognized to be the first single to feature the record "scratching" technique.

"She Blinded Me With Science" by Thomas Dolby (1982)
The many synthesizer melodies in this track combined for a Dolby's only hit song in the US (#5). It was enough to push him to the forefront of electronic music in the early '80s and at the aforementioned Grammy award performance in 1985.

"Oh Sherrie" by Steve Perry (1984)
Perry's biggest hit as a solo artist could be credited to the synth riff that leads and ends his love song. Bill Cuomo who was the keyboardist also performed the riff on Kim Carnes' popular track "Bette Davis Eyes."

"Push It" by Salt-N-Pepa (1987)
Originally released as a B side to "Tramp", the rap duo's international hit features a killer synth riff repeated throughout the song. It's mediocre performance in the UK was trumped by a top ten re-entry after performing the track live at Nelson Mendella's 70th birthday concert (of all places.)

"Sweet Dreams (Are Made of This)" by Eurythmics (1983)
The British new wave duo's international hit featured not only a rhythmic synth riff throughout, but also a killer synth solo. It reached the top ten in 13 different countries.

"Final Countdown" by Europe (1985)
The synthesizer did have a place in rock music as Europe proved with its biggest hit. The signature riff was written several years prior to recording the song, but keyboardist Joey Tempest was urged to create a demo. Even then, the entire band wasn't sold on the synth sound for rock music, but Tempest fought hard to include it on the album.

"Jump" by Van Halen (1984)
Adding synthesizers to rock music became successful and also poisonous to Van Halen in the mid '80s. Their most successful hit was powered by a driving synth riff which eventually led to David Lee Roth's departure after disagreements over the band's movement away from traditional hard rock. But despite the break up at their apex, Van Halen's synth-driven sound continued to produce success with singer Sammy Hagar.

"Take On Me" by a-ha
Influential in many ways, the synth riff combined with the iconic rotoscoped music video led a-ha to the top of the charts in 7 different countries. It actually flopped twice on the UK charts and wasn't until Warner Brothers Records invested in the band to re-record and pair with the revolutionary music video.