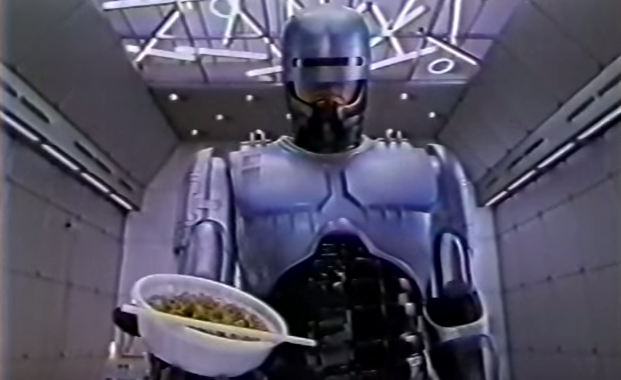 Fans of the RoboCop franchise will remember the "fake" TV commercials that were inserted into each movie. Well, two Asian commercials featuring RoboCop peddling food are not fake and actually aired during the peak of the police bot's popularity!

I had not see these ads before today even though they were actually unearthed a couple years ago. At the time when R-rated movies were converted to cartoons and arcade games, it's not really surprising to see RoboCop oddly placed in TV commercials. The films were popular worldwide and even though I could find much more foreign box office information on the original trilogy, the 2014 remake grossed more than triple worldwide versus its domestic take ($50 million in China alone.) Assuming those numbers were similar in the late '80s and early '90s, these two Asian food commercials that aired during RoboCop's peak popularity definitely make more sense.

In this commercial, Robocop shows us how he quickly fuels up after a long day of chasing bad guys. We also see he keeps a handy set of chopsticks in his side leg compartment so he's always prepared to eat. And if RoboCop's encouragement wasn't enough, we see at the end of the commercial that there are rewards for eating these noodles in mass quantities! Who wouldn't want a full RoboCop body suit for Halloween or a "Robo-cup" bowl and utensil set to make your college friends jealous at the dorm?

In this commercial, we find out RoboCop's true craving...frozen fried chicken. He jumps out of the TV set to target an unexpected family's supper. After leaving just the bone, he inquires if this came from a Colonel in Kentucky to which the mother directs him to their freezer. RoboCop spares their lives and instead happily relieves them of the appliance.
Newer
Older