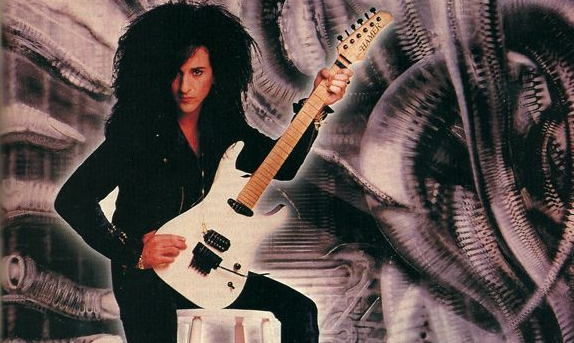 My love for the 1980s combined with my career in marketing and advertising fuels an unbridled love for vintage print advertising. If you follow RD80s on Tumblr, you've seen plenty of vibrant and outrageous advertisements. Some of my favorites include discontinued food items, automobiles, toys, and video games.

When it comes to the music industry, there seemed to be no limits on the amount of neon and chrome needed to sell cassettes, Walkmans, or keyboards. Guitar company advertisements also had that over-the-top attitude which permeated throughout the decade. I've found 11 guitar ads were (at the time) totally rad but looking back now seem just totally ridiculous. 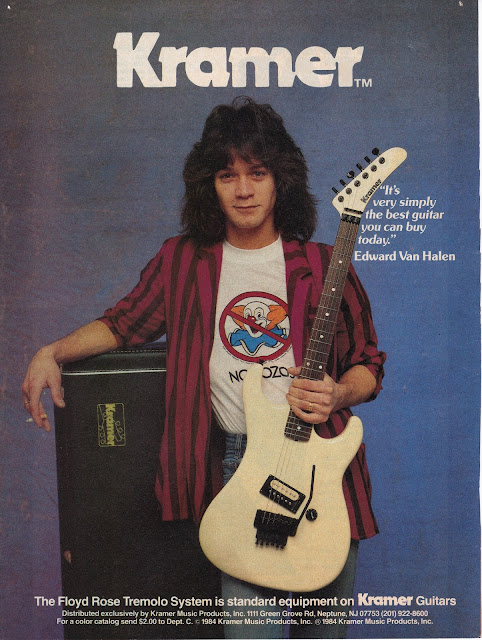 This is the ad that prompted this article. I looked at this Kramer ad featuring Eddie Van Halen was trying to imagine how the photo shoot went down. The photographer had this grand plan and elaborate wardrobe to create a true Van Halen concert experience. Eddie shows up late and says "I'm gonna lean against this case, smoke my cigarette, hold up your guitar and your gonna take my picture. That's the deal or I'm outta here, Bozo." 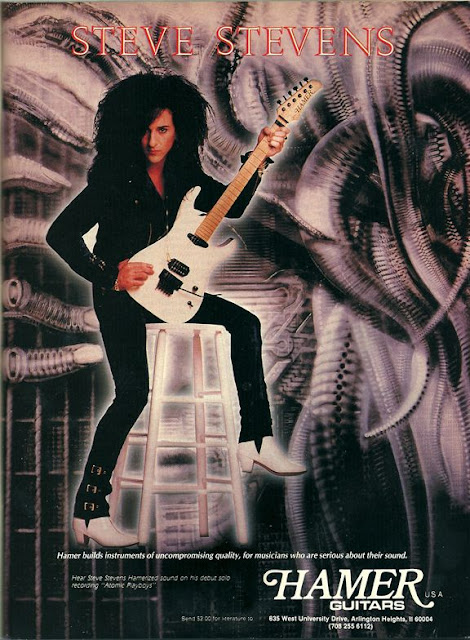 My eyes have no clue where to focus on this Hamer ad featuring Steve Stevens. Do I look at the chrome x-ray images of snakes and human fingers? Do I look at the shrubbery of hair, black jumpsuit, and white platform shoes? And how is he balancing all that rad on that little white stool? 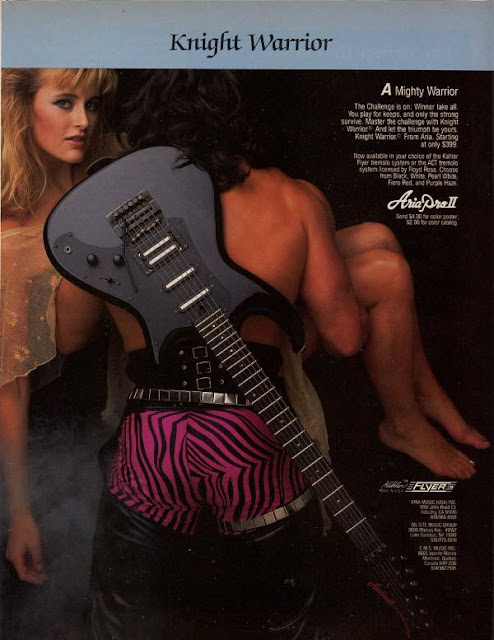 The concept of this Aria Knight Warrior ad is simple, the ultimate depiction of "how rock stars pick up chicks." 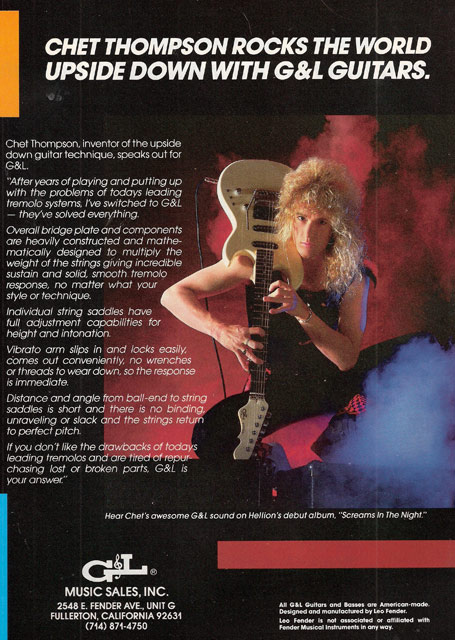 This G & L tells of Chet Thompson's problem with leading tremolo systems. I'd say he has nobody but himself to blame for "the problem." He's obviously doing it wrong. 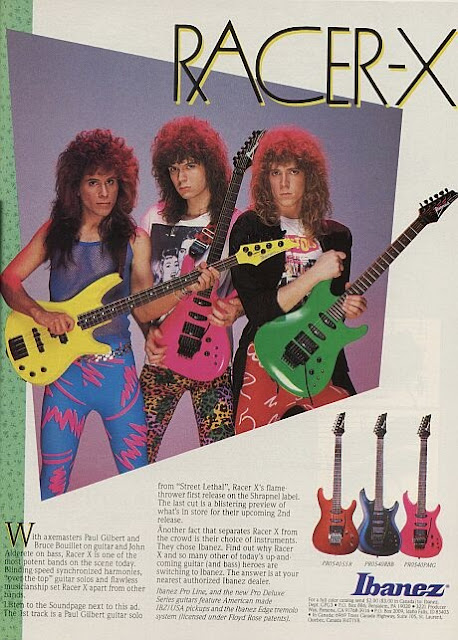 On the opposite page of this Ibanez ad was an ad for their spandex clothing line with new Trapper Keeper design patterns. 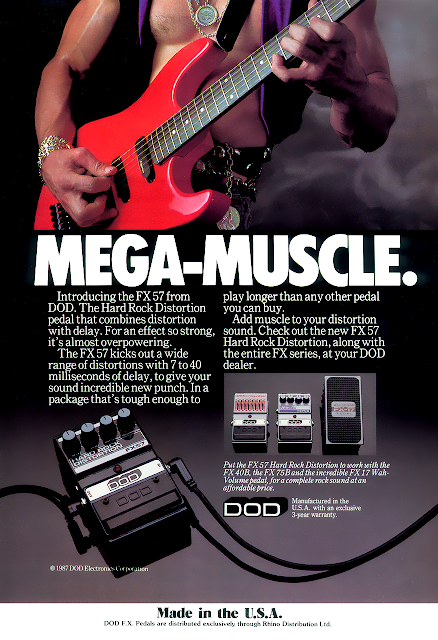 I'd never tell this to the "guitar player" depicted in this DOD ad, but he's obviously a poser. No true '80s rocker had arms that big...they were all deflated by needle holes. 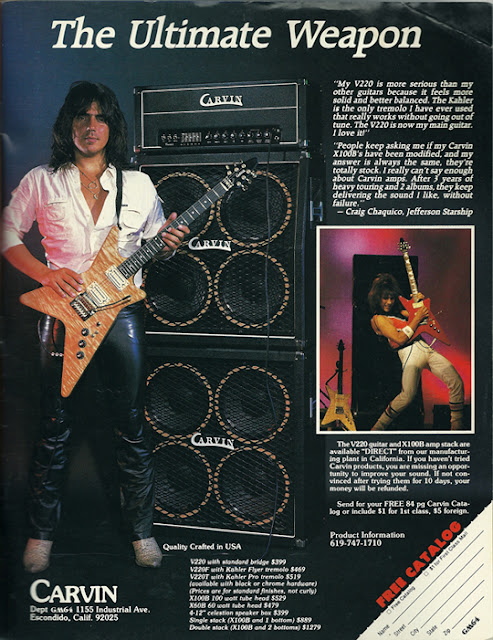 Was this Carvin ad for guitar players that had daytime and nighttime gigs? "For my sets at the Holiday Inn, I use my simple guitar. When I tease my hair and rock out at night, I use my candy apple red guitar." 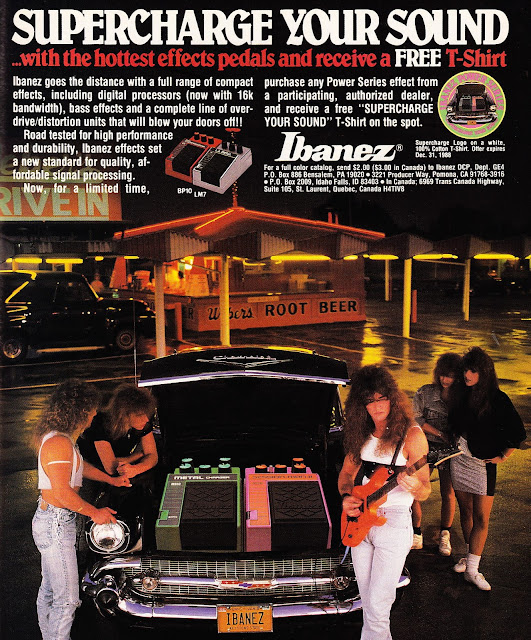 I'm not sure what's more ridiculous, Ibanez effects pedals powered by an old Chevy or the half-cut t-shirt and acid-washed jeans ensemble worn by the guy in the corner. 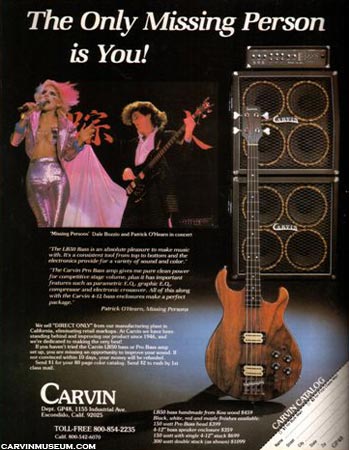 I see what you did there, Carvin. It looks like she's also missing a few buttons on that shirt. 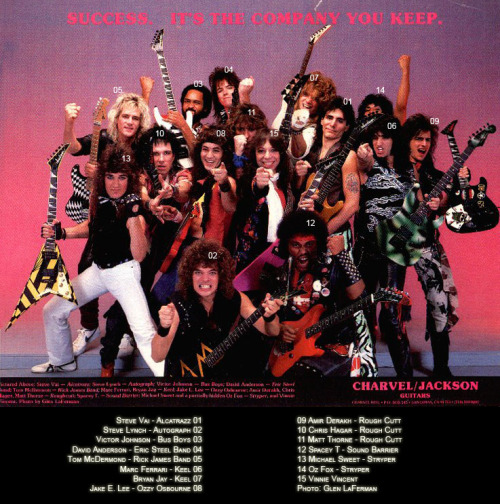 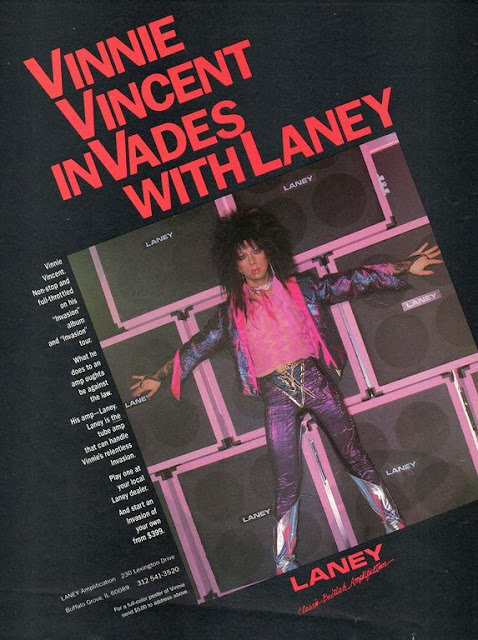 The only thing this Laney ad featuring a neon-outfitted Vinnie Vincent is invading is my comfort level.
Newer
Older