Streaming The 80s: A Major League Manhunt For Toxic Batman 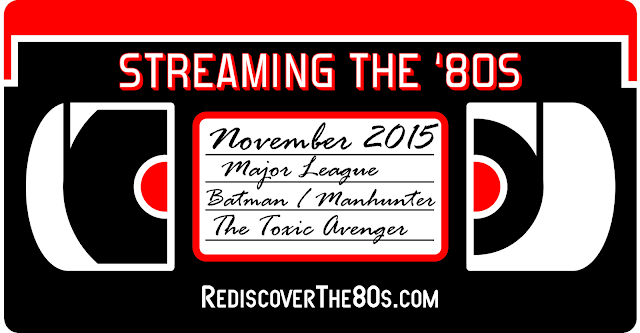 Streaming the '80s is your monthly source for the latest '80s titles available on Netflix and Amazon Prime. Not a member of these streaming services? Start your 30-Day free trial now by clicking on the previous links.

November already has some great new titles to offer including a couple newly released documentaries that '80s fans will surely enjoy. Also returning this month in a new series on Netflix is the Care Bears! Season 1 of Care Bears & Cousins will be available on November 6. Also keep your Netflix queue open for the documentary Electric Boogaloo: The Wild, Untold Story of Cannon Films that will be released on November 29. It looks like a fun journey through bad action films and B-movie cinema of the '80s. Check out the trailer here. Plus, Amazon Prime will be adding The Adventures of Milo and Otis on November 5.

Let's take a looking now at what's new and popular!

Major League (1989)
Rated R Netflix
With a roster of misfit players, a baseball team owner is banking on a losing season but underestimates the motley crew's will to succeed.

Baseball season just came to an end with the Kansas City Royals taking home their first World Series championship since 1985. You can finish up the season by catching Major League on Netflix. It's my 2nd favorite baseball film just behind another '80s classic Field of Dreams. So many quotable lines that I use to this day including my favorite "Up your butt, Jobu."

Rated PG-13 Amazon
Michael Keaton stars as the nocturnal crime-fighter. Jack Nicholson is the Joker and Kim Basinger is Vicki Vale, the beautiful photojournalist with a passion for Batman's alter-ego.


Still my favorite superhero movie to this day although it's probably because I have an obsession with the "Caped Crusader. Because of this film, I also remember wearing out my cassette single of "Batdance" by Prince as a teenager. It's also still available on Netflix.

Rated R Netflix
A fast-talking yuppie is forced to slow down when he meets the brother he never knew he had, an unusually gifted autistic savant named Raymond.

I remember a time when TBS and TNT seemed to run this movie on 24-hour rotation. I'm not sure if I've actually ever watched the original, non-TV version of the film. If you've never seen it, it's one you need to watch at least once. 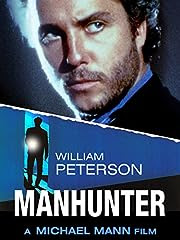 Rated R Amazon Prime
Using his uncanny ability to get inside psychopaths' minds, former FBI agent, Will Graham, returns to action to hunt down a serial killer.


My wife and I were once big CSI fans, mainly because of William Peterson aka Gil Grissom. There was a point several years ago when I rediscovered some of his early films like To Live and Die in L.A. and this one. With Michael Mann directing and Brian Cox playing Hannibal Lector, I think this film is very underrated when it comes to '80s suspense films. 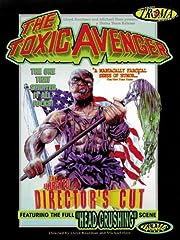 Rated R Amazon Prime
A 90-lb nerd is transformed into a Hideously Deformed Superhero after falling into a misplaced barrel of nuclear waste in this Smash Hit Cult Classic!


If I had to guess, the first time I watched this movie was probably on USA Up All Night. It's been probably since then that I've watched it mainly because I'm not that into horror films, but I still hear many horror fans uphold it as a cult classic.

Rated TV-PG Netflix
Thirty years after "Back to the Future," Michael J. Fox, Robert Zemeckis and others talk about the film that went from blockbuster to cultural icon.


After living through all the hype surrounding Back To The Future Day 2015, I was really excited to see this appear on Netflix. I watched it with my good friend Wyatt and we both really enjoyed it. Great perspectives from the filmmakers and actors, but also the fans.

Rated NR Netflix
Thirty years after a classic documentary profiled the class of 1984, this epilogue revisits the film's subjects to reflect on their lives since.


I had the awesome opportunity to screen this film back in September when it was released on DVD and VOD. I had never seen the original documentary which is very entertaining, but the added reunion at the end of this "Revisited" film between the students and filmmaker made for great closure on the project. Highly recommend documentary film fans to check this one out.

'80s Pop Ten Lists
Here are the 10 most popular '80s movies or TV shows currently available on Netflix and Amazon Prime and their position change from last month's list.

Removed from Netflix was Stand By Me.

Amazon Prime
Removed from Amazon Prime was Back To The Future and Blue Velvet.

If you've missed last month's post, visit the Streaming The 80s archive. Most featured titles should still be available to stream. Also, feel free to comment with any movies or shows you've recently rediscovered on Netflix or Amazon Prime.