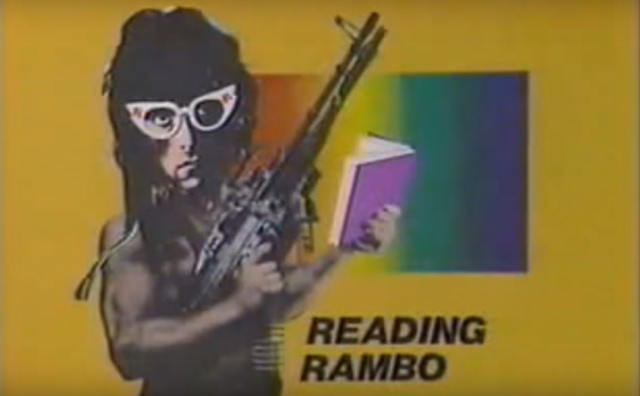 You Can't Do That On Television was one of my favorite Nickelodeon shows as a kid. You can still find plenty of great clips and even a few full episodes on YouTube. Great compilations from the show include slime and water compilations plus tons of great gags.

One of my favorite running gags on You Can Do That On Television was the made-up show card at the beginning of the show that the announcer told us "will not be seen at this time." These fabrications seemed to set the tone for the crazy, sketch comedy show. Most were downright hilarious while others I would label as somewhat controversial. The writers loved to make fun of their PBS rivals as well as "macho" characters like Rambo and The A-Team.

Let's first take a look at some of the more controversial title cards that made You Can't Do That On Television live up to its name... 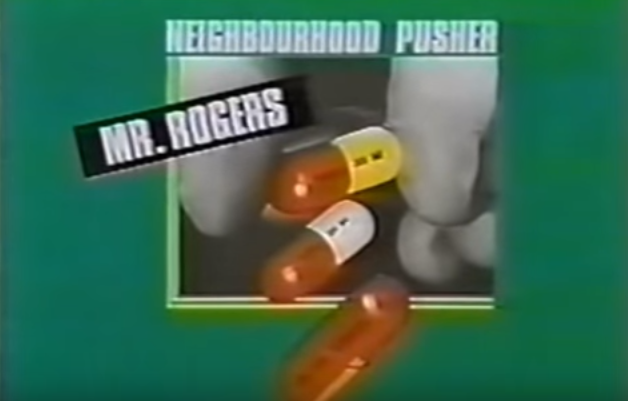 "Mr Rogers Neighborhood Pusher"
Was Mr. Rogers the first Walter White? YCDTOT put the PBS show through the ringer also using title cards saying that Mr. Rogers "vandalizes", "bullies", and finally "gets evicted" from the neighborhood. They even had Captain Kangaroo "robbing a bank!" Yikes! 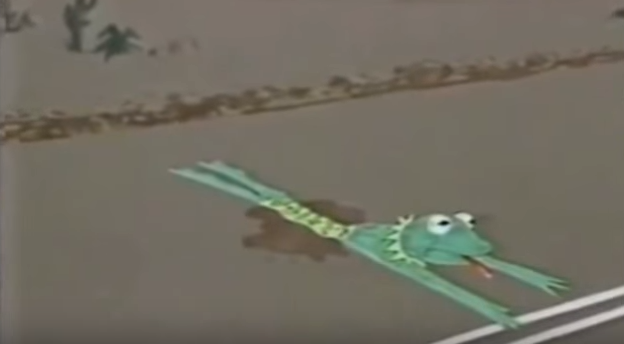 "Kermit The Frog Tries To Cross The Highway"
Sesame Street was another frequent target by YCDTOT, showing Kermit as roadkill and Miss Piggy being "sold to the sausage factory." Other title cards featured "Hit and Run on Sesame Street" and "The Muppets Getting Stuffed." Ouch! 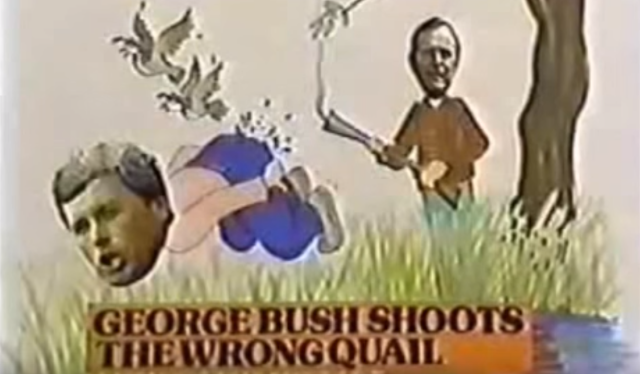 "George Bush Shoots The Wrong Quail"
YCDTOT even got into politics with some of their made-up shows. Some included George Bush shooting Dan Quayle, "Rambo Shoots the Ayatollah," and an "Atomic Blast Levels Fantasy Island." Did kids even know who the Ayatollah was? 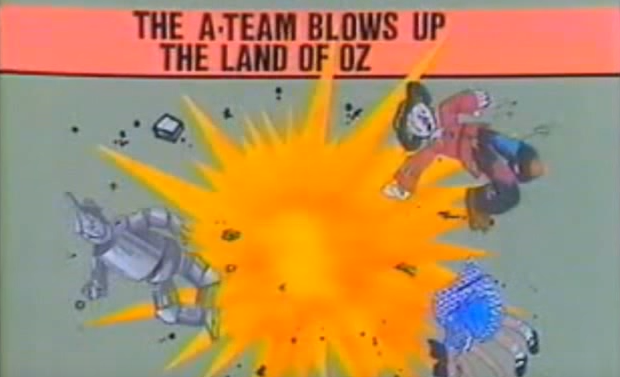 "The A-Team Blows Up The Land of Oz"
YCDTOT liked to annihilate popular '80s shows and even use TV characters to do their dirty work. The A-team "wrecked Disneyland" and "blew up the Land of Oz." The Love Boat met it's demise several times running aground on Fantasy Island, going on a "Cruise Missile Cruise," becoming a "garbage barge," and getting eaten by Jaws. The Waltons "Moved to Mt. Saint Helens," "Fantasy Island became a Volcano," "Pac-man Ate General Hospital", and Godzilla terrorizing Smurf village. Oh, the horror!

You Can't Do That On Television also featured some more light-hearted and funny title cards. As I mentioned before, they loved to turn action film stars and superheroes into something a little less macho and even exalt the "nerds" in there place. There were also title cards that were just plain hilarious and dare I say comedic genius. Let's take a look at a few... 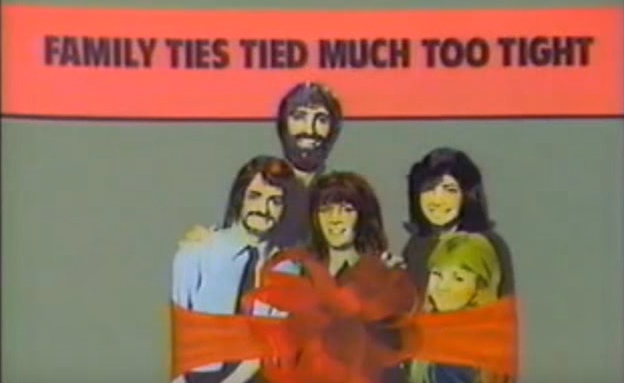 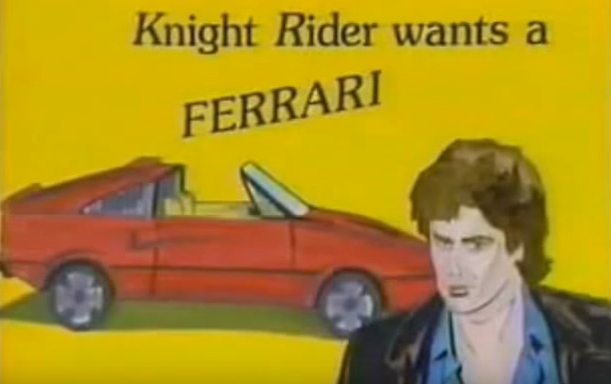 "Knight Rider Wants a Ferrari"
Got a cool car? Not for long as YCDTOT showed Michael Knight wanting a Ferrari, The Duke of Hazzard getting in a long line during the gas crisis, and Batman giving away his Batmobile! 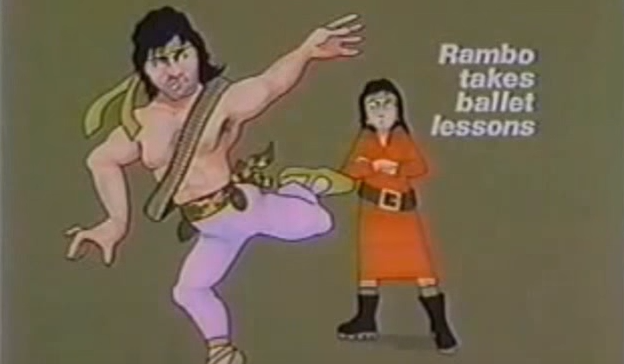 "Rambo Takes Ballet Lessons"
Think your tough? Not to YCDTOT. Rambo was a frequent target in the title cards, having him take ballet lessons, getting "Paddled by the Mothers of the World," and showing off his armpits. They also challenged his smarts by simply having him read (headline image above) or think as "the thinker." YCDTOT also brought other heroes down to earth like sending Mr. T "to a Tupperware Party," "Superman Losing His Tights," and Conan now working as a librarian. 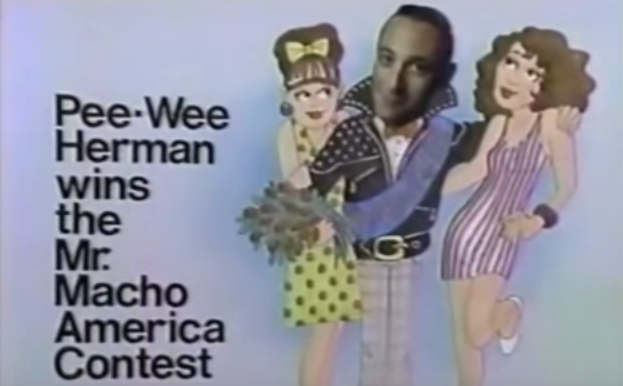 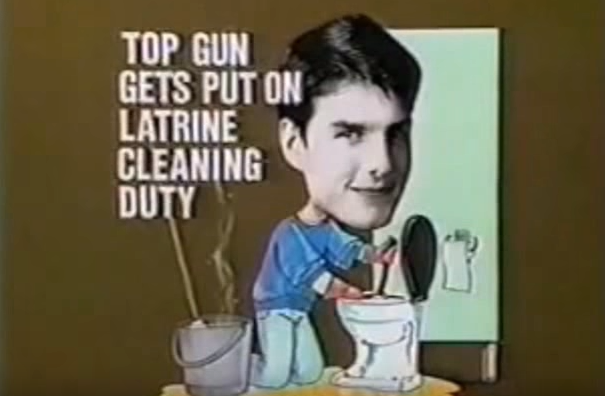 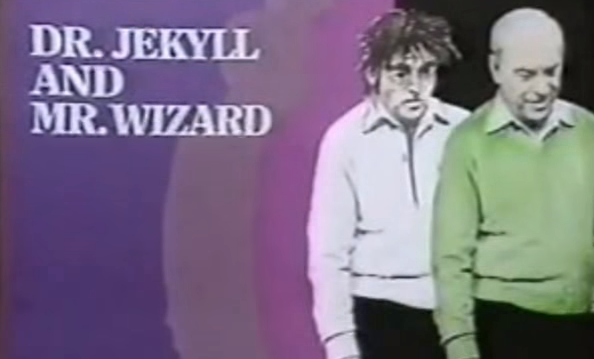 "Dr. Jekyll and Mr. Wizard"
Finally, YCDTOT wasn't afraid to make light of other Nickelodeon shows, namely Mr. Wizard. They gave him the title of mad scientist by paring him with Dr. Jekyll. They also suggested he knew how to make it rain and also explain the secrets of the universe.
Newer
Older