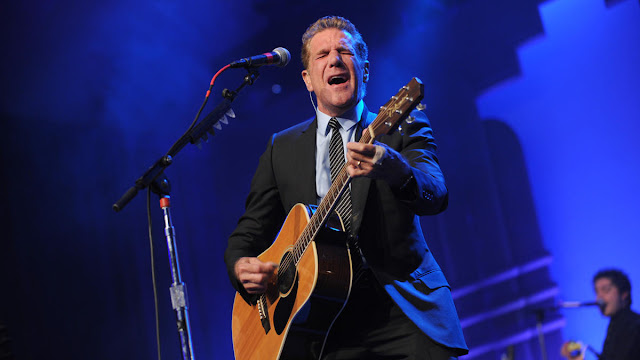 We've lost another music legend in 2016. Founding member of The Eagles and Rock and Roll Hall of Fame inductee Glenn Frey passed away on Monday Jan 18. According to several sources, he had been struggling with rheumatoid arthritis, acute ulcerative colitis and pneumonia over the past couple weeks and lost his battle yesterday at age 67.

After losing Natalie Cole, David Bowie, and now Frey in the past couple weeks, I truly hope this trend does not continue. As much as I love writing for RD80s, these tributes really takes a toll on your motivation. However, I do hope that looking back on the careers of these brilliant musicians do help to pay tribute in some small way.

Glenn Frey accomplished so much over his music career which spanned 5 decades. Of course, his initally success with The Eagles earned him 6 Grammy Awards and a place as one of the best-selling groups of all time. When the band split in 1980, Frey continued on as a solo artist and released 5 studio albums along with several soundtrack singles. In all, the singer-songwriter made it to the US Top 40 an impressive 24 times. Frey also dabbled into acting, making guest appearances on Miami Vice, Arli$$, Nash Bridges, and the 1996 film Jerry MacGuire.

With my parents being fans of The Eagles and listening to Top 40 as a child in the '80s, I've been close to Glenn Frey's music practically all my life. In 1994 when I was a senior in high school, I remember how big of a deal it was when The Eagles reunited. I wore out the Hell Freezes Over album and it helped to point me to greatest hits albums released by Frey and Don Henley.

As a tribute to his musical talent, I thought I'd list my 5 favorite tracks during Frey's solo years which thrived in the '80s. I invite you to do the same in the comments. Feel free to include his Eagles' hits as well.

"The Heat Is On" is the epitome of '80s music. Heavy saxophone, keyboard, and driving guitar made for an awesome rock track that was a #2 hit. Of course, it also helps that you cannot hear the song with picturing Eddie Murphy in a Detroit Lions jacket. The Beverly Hills Cop soundtrack won a Grammy and was #1 on the US Billboard album chart for 3 weeks. Frey's single charted the highest of the five that were released from the album.


As a Miami Vice fan, two of Frey's singles are forever linked to the show. "You Belong To The City" was a cross-promotional track but specifically intended for the episode "Prodical Son" which was the season 2 debut episode. The music video (above) was also iconic and even parodied by the TV show Married... With Children. Pepsi even used the track along with Frey and Don Johnson for a 1986 TV commercial.

"Smuggler's Blues" is the other Frey song that is linked to Miami Vice. The season 1 episode sharing the same name guest starred Frey as a pilot working with Crockett and Tubbs. The music video (above) was a mini-movie in itself featuring Frey in the lead role with his then-wife Janie Biggs. The video was nomiated for two MTV Video Music Awards and won for best concept.


As a huge Ghostbusters fan, I had to include "Flip City" on this list. Appearing on the Ghostbusters II soundtrack, the track I think is often overlooked from the huge success of Bobby Brown's theme "On Our Own." It's used in the scene when the pink slime invades New York City and strange happenings begin like fur coats coming to life.

My last choice is "The One You Love" from his solo debut No Fun Aloud. It's such a soothing track and features a great sax riff and end solo. Frey was so versatile to deliver great upbeat songs, but also knew how to deliver great ballads and this could be the best.

Post your top 5 Glenn Frey tracks in the comments to continue the tribute.