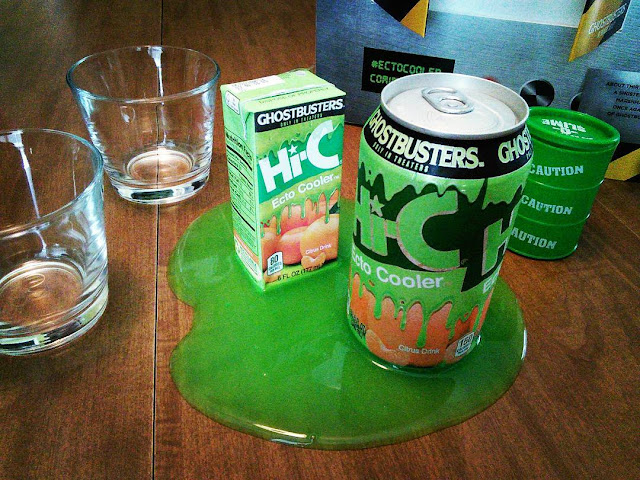 Sometimes being a connoisseur of retro pop culture really pays off. About a week or so ago, I was contacted by a marketing company representing the soon-to-be-released Hi-C Ecto Cooler drink! They asked for my mailing address in exchange for getting an early sample of the new drink. I was excited beyond belief that RD80s was chosen!

Last Thursday (which was also my wedding anniversary) I noticed a package left at my front door when I came home from work. I was a bit baffled at first since I'm an avid eBay buyer and could not remember what I had ordered. When I saw "Rediscoverthe80s.com" on the label, a light bulb went off and I remembered!

What was really surprising was the box that it came in...a Ghostbusters trap! Inside was a drink box and can with a surprise barrel of green slime. I had heard that the can was cold-activated and sure enough, when chilled the Hi-C and Ghostbusters names turn from orange to slime green! So I put the drinks in the fridge and Saturday we decided it was time for a taste test.
Since I had enough to go around, I invited my boys to try it with me. They have been exposed to both Ghostbusters films, The Real Ghostbusters animated series, and even Filmation's Ghostbusters cartoon. They were very excited to try it even though they pretty much never heard of Ecto Cooler before. For me, I'd guess it has been at least 25 years since I drank it so it was hard for me to remember what exactly it had tasted like in the past. We decided to film our taste test for posterity's sake...

The results are in and we will definitely be visiting the local stores on May 30 to get more! Thanks goes out to everyone at Hi-C (and Coca-Cola) as well as the filmmakers of the new Ghostbusters film for bringing back a true piece of retro pop culture! It means alot to me (and I know the retro pop culture fraternity of websites) to include us in the preview. This was a great moment to share with my boys and we will definitely be talking about it for years to come.

See you at the movie theater on July 15! For more info on Ecto Cooler, visit Ecto.Cool and connect with Ecto Cooler on Facebook and Twitter.