Watch Michael J. Fox Perform 'Back To The Future' Music With Coldplay (VIDEO) 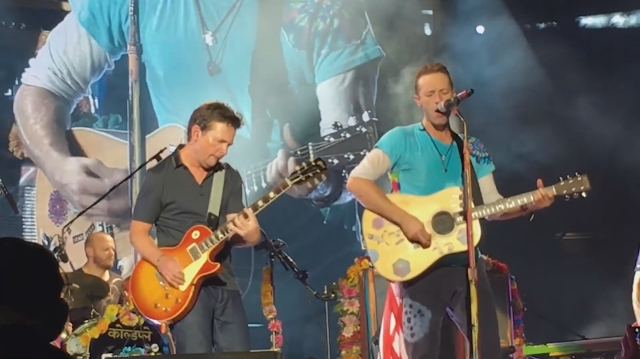 I'm not sure the crowd at Metlife Stadium in New Jersey last night were ready for this yet. The British band Coldplay, currently on their Head Full of Dreams tour, brought a special guest on stage last night during the concert's encore performance. After a video message from lead singer Chris Martin's son Moses requested some tracks from his (and his dad's) favorite movie Back to the Future, Michael J. Fox joined the band onstage for two songs.

After making it through the ballad "Earth Angel" without any limbs fading away, Fox and the band wailed to "Johnny B. Goode". This actually wasn't the first time Fox had paired up with Martin as they also played during the annual benefit for the Michael J. Fox Foundation for Parkinson's Research in 2013.

Watch the performance below..."you kids are gonna love it."