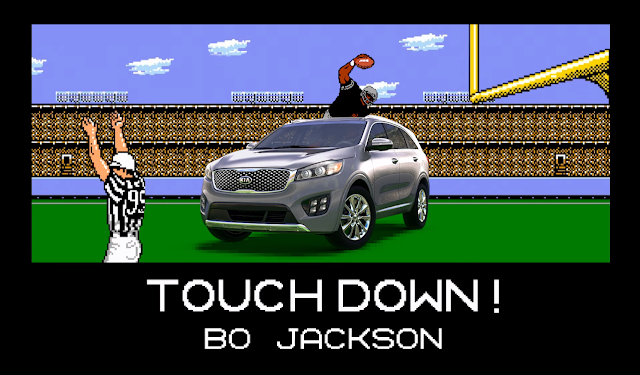 A new football season is here with the NCAA kickoff this past weekend and the opening game of the NFL season tonight. As you cheer on your team to victory, you can expect to see the new Kia Sorento commercial featuring Bo Jackson on heavy rotation. The new ad is a homage to Jackson's character in the classic NES football game Tecmo Bowl!

Most of you will remember how unfair it was using the Los Angeles Raiders team and Jackson's freakish skills when playing opponents. The new commercial takes us inside a typical game with Bo running outside of the stadium and hopping into a Sorento to evade the defense and score a touchdown. As someone who remembers playing the game and even put together his own LEGO tribute to Bo Jackson on Instagram earlier this year, this is truly a great concept and masterfully executed. I'm might even rank it ahead of the Pontiac Spy Hunter commercial from several years back on my retrogaming car commercial list. Well done, Kia!!!