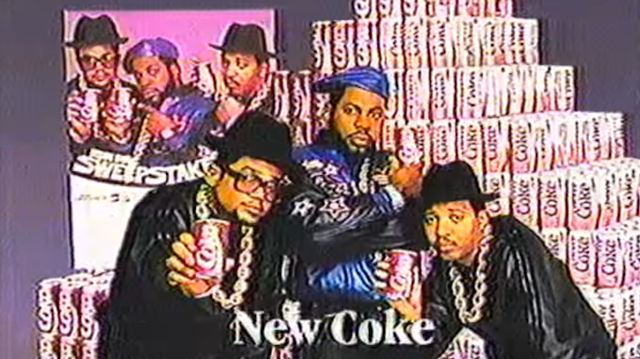 Run-D.M.C. was perhaps the most important rap group in music history. Their new school hip hop albums were the first to earn gold, platinum, and multi-platinum certifications. They also became the first of their music genre to have music videos on MTV and be nominated for a Grammy award. And finally, they were the first to appear on American Bandstand with Dick Clark and the only hip hop artist to perform at Live Aid concert in 1985.

The impact of Run-D.M.C. along with their contemporaries like LL Cool J and the Beastie Boys also led the way for hip hop to be a marketable commodity. From fashion to film, Run-D.M.C. became a sought after brand that is still regarded (and recently infringed upon) by marketers to this day. Shortly after their breakthrough in the late '80s, Run-D.M.C. was everywhere on the dial cutting TV adverts, event promos, and PSAs. Take a look at some of their earliest and deffest TV commercials...


New Coke - Max Headroom was essentially a 3D rendering of a record scratch so Run-D.M.C. and "Beats to the Rhyme" was a nice fit into the New Coke marketing plan.


Adidas - Of course you can't mention Run-D.M.C. and not think of the Adidas shoe brand. I still can't figure out how they kept the tongues inside their shoes withouts shoestrings, but that apparently wasn't a major problem since they are still part of modern Adidas marketing.

Anti Drug PSAs - The "Just Say No" campaign led by Nancy Reagan to squash drugs was marketed to every industry and community by high-profile celebrities. Run-D.M.C. joined the likes of Clint Eastwood, Mr. T, Mike Tyson, and countless others to remind kids (and parents) everywhere that drugs weren't the answer. They also did an anti-drug PSA for B.A.A.D., Black Artists Against Drugs.


GAP - Adding new Gap-inspired lyrics to "Peter Piper" became more than a commercial to Run-D.M.C. After the popular ad aired in the late '90s, Rev Run attributed fans getting a fresh look at their entire discography directly to the ad's success.

Do you remember Run-D.M.C. starring in any other commercials? Feel free to add them in the comments.
Newer
Older
Powered by